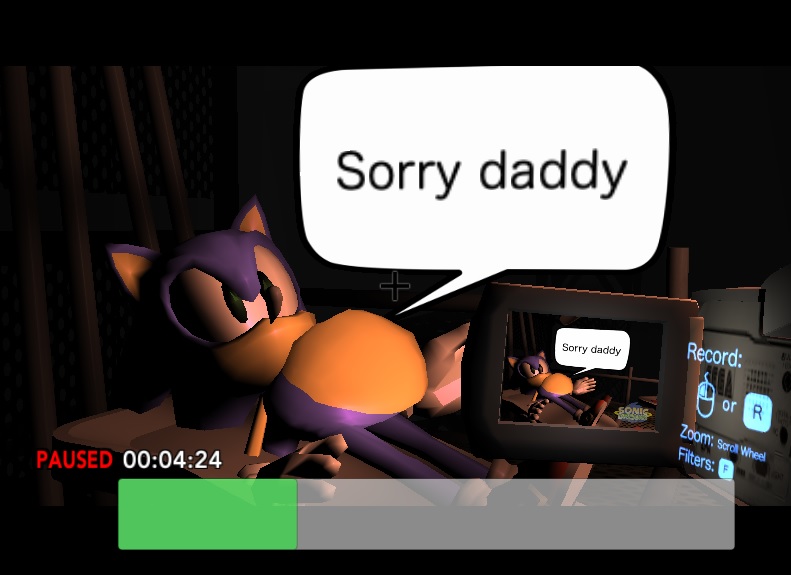 There’s so much Sonic fan art that an internet pastime is typing your first name into Google Images followed by “the hedgehog,” and seeing yourself transformed into the ghastly Sonicverse. (It works because fans have created an unfathomable number of Sonic variants with alternative names—almost all names, it seems. Here’s mine.) In fact, Sonic fan art is so voluminous it even has its own curator, who operates under the title “Bad Sonic Fan Art,” and who actively tries to find the worst examples and posts them on Twitter and Tumblr.

In an interview with Buzzfeed, that same curator reasons that there must be so much Sonic fan art as the videogame series has been reinvented so many times over the past 25 years. “With that it kept bringing in a new group of fans each time, each more awkward than the last,” he said. As to why most of it is so goddamn horrendous? No idea. The only logical conclusion is that Sonic fans are just weird.

Sonic Dreams Collection is not a piece of Sonic fan art. But it blends in so easily. And that seems to be half the point. It’s the latest project by Arcane Kids and Glitch City co-founder Arjun Prakash, the former being the small collective that has previously reveled in blowing up the devout fandom of millennial culture and trashy remixes with its previous creations. There was the “Pokémon Millennial Edition” video that seemed to celebrate the strangeness and admirable energy contained within Pokémon fan games. “Millennials! this is the fucked up planet we deserve” reads some text during the video.

Arcane Kids did something similar with Bubsy 3D, which invites you to “explore your relationship with art” through the ill-fitting lens of a Bubsy videogame. It starts off as a love letter to artist James Turrell through a lo-fi virtual museum that you explore with other players, appreciating Turrell’s use of light and space. But then Bubsy literally descends to hell, where he becomes a ghost under your control, one you can use to haunt other players and explore previously unreachable areas.

This unexpected tangent shares an outlandish flavor with the fan-made spin-offs that popular media tends to experience—especially videogames—in which bits of lore are stretched and twisted to meet perverted desires, and a lack of artistic skills tack these visions on to the swelling mass as if struck by a clumsy hammer. Arcane Kids’s interest in this isn’t an assumption on my part. It reads in the group’s manifesto that they believe “bad is more interesting than good.”

Bearing all that in mind, Sonic Dreams Collection is only Arcane Kids taking its own exploration of this kitschy, amateur fan aesthetic further. This time, it manifests as four games in a single package, with them being framed as long lost Sonic game prototypes that Sega made for the Dreamcast. This is all a lie of course, part of the parody, but it presents the collection as it needs to be: unfinished vaporware that was thrown into a bin and never meant to see the light of day.

The idea is to engage with an imagined wilder side of Sega that it ultimately had to discard. These are the commercial products that didn’t meet the standard. This fragile, often unseen space is exactly what Arcane Kids is interested in shoehorning. As with fan art, it operates in that incongruous space between executive-approved material and bizarre, unrelenting expression.

So what do we have here? First off, there’s a character customizer in which you can blow up and shrink the limbs and head of your own Sonic-brand hedgehog, and change the colors as well. Not having complete control of the changes made means that what you end up with is something resembling the endless hand-drawn Sonic fan art, in which bodily proportions are completely unbalanced, the necessary art discipline to know any better absent. Plus, with the mouse, you can yank each of the hedgehog’s appendages and cause the 3D model into spasm. It’s easily broke.

There’s also a virtual reality sideshow in which you role-play as the roommate of Sonic the Hedgehog. Using only the direction of your gaze to interact with this fiction, you are instructed by Dr. Eggman through the power of text messaging to tickle Sonic and win his heart while sitting next to him on the sofa. You have to tickle him while distracted so he doesn’t slap your arm and turn it into floppy spaghetti as the physics system tries to keep up. Eventually, Sonic moves in closer, as if for a kiss, and you warp inside his mind, triggering a Lynchian sequence between dreams and videogames.

The third prototype is a lot more mysterious, said to be a long lost MMORPG that you need the network adaptor for in order to play. In truth, it requires a little more investigation on your part to find out what’s actually hidden here. As another part of the Arcane Kids manifesto reads, “the purpose of gameplay is to hide secrets.” This prototype is one big secret camouflaged as a broken game. Of course, it reflects the entirety of the collection, which is made out to be a leaked secret—originally you needed to go through an encrypted channel to get access, typing in the password “grandpa,” which was distributed only by word of mouth.

In one scene, perhaps my favorite, you are in a dingy industrial building where you can feed Sonic cake and burger, his belly swelling with each meal. The speech bubbles available for you to drag near his crumb-filled mouth include one that says “Sorry daddy,” implying that you’re punishing him for a miscreant act by over-feeding him. I can’t help but think “Yeah, eat it up Sonic, eat up all the shit you’ve facilitated” as I drop a patty into his gob, filming it for all to see.