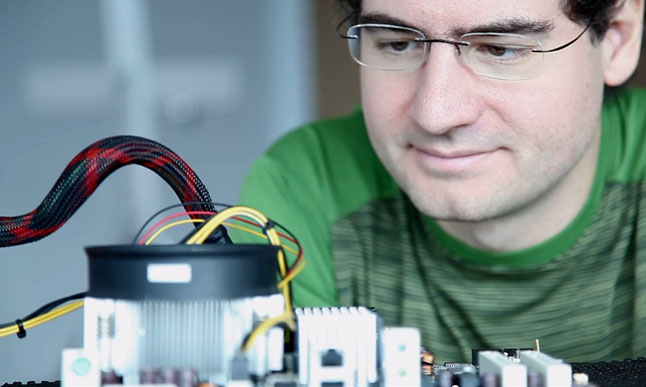 “Most things in the world are broken,” noted RAD Game Tools owner Jeff Roberts in a 2013 vodcast with programmer Casey Muratori. Roberts was talking about the busted, often unusable state of technology in our every day lives.

You’ve probably seen examples of this when you’ve simply tried to install a game: “driver not found”; “reboot now or install later?”; “an error occurred.” These are the result of poor decisions made decades ago, Roberts explains: “We’re in the mess that we are in now because of software engineering preferences from 30 years ago, made by people that just didn’t write enough code to have those preferences be worth anything.”

Handmade Network is a software movement pushing against the legacy of those decisions, and against modern, prevailing software trends. With a focus on hand-crafted software, Handmade Network aims to be a focal point for software projects that value the virtues championed by Roberts, Muratori, and their friend, Jonathan Blow.

It started with Blow—creator of Braid (2008) and this year’s The Witness—who was first to blink; frustrated with the tools he is forced to build games with, he decided to create his own programming language, dubbed JAI. “I looked at all the ideas that I had written down [for a better programming language for game developers] and I said wow, if I spend a couple of years implementing just these things, I personally would come out ahead—in terms of happiness and productivity for the rest of my programming career,” Blow told his stream viewers in 2014. “The scale of waste that I see happening all the time is so huge that if I personally would come out ahead, how ahead could everybody come out? It’s so dramatic that I had to sit down and start doing something.”

Muratori’s response to the JAI streams was to undertake a formidable challenge of his own: to livestream—from “scratch”—the programming of an entire, professional-quality videogame; Handmade Hero began in November 2014 and has aired one hour, five nights a week, most weeks since. “I think the main thing in my mind at the time was that I didn’t think modern programming educational materials—even from game programmers—were capturing what it meant to actually be a game programmer,” Muratori explained.

Software is so mindlessly produced

Muratori has used Handmade Hero to demonstrate clean, safe programming techniques, to talk about the problems with modern programming paradigms and dogma, and to point out the inadequacies of modern software. “I really wanted to show people how to make mistakes and recover from them, how to keep the code base flexible and not be afraid of mess or changes, and that the pieces will all work out into well-designed components in the end if you keep an open mind and code sensibly,” Muratori said.

A hit from the start, it wasn’t long before Handmade Hero inspired community members to begin developing applications in the spirit of “handmade”, spurred on by both Muratori’s and Blow’s spirited, and oftentimes pained, take-downs of modern tools. In fact, Muratori now develops Handmade Hero using two of these applications—a text editor (4coder) and a paint program (Milton) —with potential for more on the way.

Inspired by Muratori’s videos, and especially the “handmade” ethic, and seeing a benefit for the proper organization of the emerging handmade software scene, community member Abner Coimbre took on the task of splicing these projects off into their own, self-governing thing. That was how the Handmade Network came to be. “Handmade Network is a non-profit website to centralize the software projects inspired by the [Handmade Hero] series. This brings these developers together, along with the custom-built blogging, forums, and versioning tools needed to make their projects succeed,” explained Coimbre, who is a launch control systems programmer at NASA’s Pathways Program.


The big question, then, is can Handmade Network have an impact on 30 years of entrenched momentum? “As for this whole handmade movement,” said Coimbre, “it’ll carry on for many years to come. Software is so mindlessly produced that now a reasonable [number] of users might appreciate alternatives from people dedicated to their craft.”

“I am much more interested in the effect it has on my small little corner of the industry, and it has already had a profound impact there,” said Muratori, referring to the software he has already switched to for the development of Handmade Hero and his professional work. “And whereas in the past I had no idea where I was going to get programmers to hire for [my game development studio,] Molly Rocket, now I’m much more optimistic that I’ll be able to find people who program in a way that is useful to us.”

Muratori will be holding the second annual HandmadeCon—HandmadeCon 2016—on November 19th at the Seattle Center in the US, a conference dedicated to the discussion of these topics and the craft of programming videogames.

And finally we come back to Jeff Roberts, whose company epitomizes this detail-oriented, user-friendly approach to software development—Roberts has a more sobering take; “Let’s say this movement doesn’t suffer from the same problems [as those designers of 30 years ago] and magically makes all the perfect decisions—even then, it will be decades before there is any real impact.

“But that’s OK—impacts are overrated. I just want the few tools I use to work. That’s how low the bar is right now.” A world with fewer broken things sounds nice.

You can find out more about Handmade Network on its website.