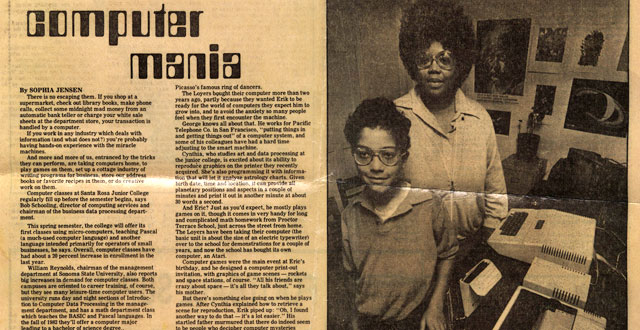 Erik Loyer’s recent experimental iOS apps, Strange Rain and Ruben & Lullaby, may not technically be “games,” but in letting players interact with musical, visual, and narrative elements by softly petting the iPhone or touching the screen to direct rain, create a unique style of expressive play. To find out what prepared Loyer to create such singular experiences, we talked with him about his parents’ influence, his fear of earthquakes, and a childhood friend with some odd stipulations for maintaining their friendship.

What was your most traumatic childhood memory?

I did a lot of playing videogames and a lot of programming for fun. I would tend to come up with these arcane systems for things. Putting on graph paper how many times I wrote in my journal, or coming up with elaborate things with Legos.

Legos [were] a big thing. Just making different crafts and ships and bases and things like that. I had a whole setup that my dad helped me build that was like a table. Like a railroad-style table that would lift down from the ceiling from a pulley in the garage, and I had a whole city that I build with all the different road plates and all the different sets. I was pretty proud of that.

What were you afraid of growing up?

Earthquakes were one thing. I was in a car accident when I was growing up. We were hit by a drunk driver, and my parents were fine, but I was about to say something and I bit my tongue. I almost bit my tongue off, which I didn’t even notice until later. I had to get stitches in my tongue. After that, I started being afraid of earthquakes; if I heard a truck rumbling down the street at night or something like that, I’d think it was an earthquake and I’d either get up and go find my parents, or I’d just sit there being worried about it.

What elementary school did you go to?

What did your parents want you to be when you grew up?

They didn’t really express any desire for me to go into any particular field. They were very much of the school of “find your bliss … figure out where you want to be…” They bought us an Apple II—this was in 1978—and I remember them saying that “When you grow up, it’s going to be very important for you to know how to use computers.” But that was about the extent of their guiding my career path.

Choplifter was one of my favorite games. I just loved the fact that it was this whole scenario that had these different stages to it. It had you flying your helicopter, and you had to go rescue the hostages. There was just this whole rhythm to it where you had to go out there, rescue the hostages, bring ’em back, and every time it would be more difficult, but it wouldn’t be this hard and fast level distinction. It was nice that you could add a story on top of it. My friend and me would do voiceover for the little people running around. We’d say, “You be the people!” We’d have one person playing the game and the other person would be making up funny things while the hostages were running around.

What was your least-favorite childhood game?

Probably softball. I couldn’t hit, so I’d just go up and strike out and that was basically the end of my play. [Laughs]

What was a big childhood secret that you had?

I had a secret friendship that now reflects very badly on me. There was kid named Jeff. He was my enemy; he always teased me and gave me a hard time, and I had another friend named Damien. Damien was friends with Jeff, but he was also friends with me. When he was with Jeff, he would always make fun of me, along with Jeff. He struck a deal with me and said, “Look, I’ll be your friend, but I also want to be friends with Jeff, so I’ll make fun of you when I’m with Jeff, but you’ll know that I don’t really mean it. We’ll keep a secret from him that you and I are actually friends.” I don’t know why I didn’t just tell him to grow a backbone at that point, but I was cool with that and we kept it a secret for a while.

Did you have any nicknames?