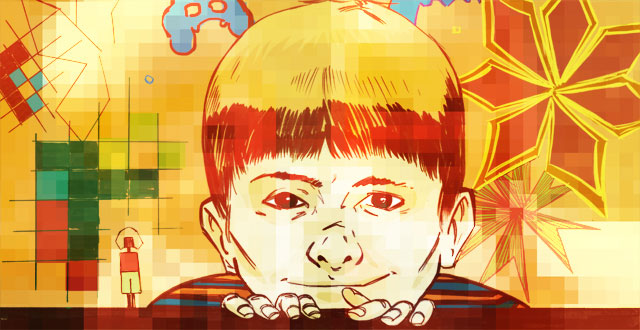 Game designer Jason Rohrer is known for his intensely personal games such as Passage, about his marriage; storytelling exercise Sleep Is Death; and other lo-fi heartbreakers. But before Rohrer the designer, there was a Rohrer the child, a tall, knife-playing, nightmare-having child of the woods. We talk to Rohrer about his Ohioan roots, failing an NSA lie-detector test, night terrors, and remembering Winnie Cooper.

Akron, Ohio. Rubber capital. I’ve been to Cleveland Cavaliers games and Cleveland Indians games with my father. He was not a sports fan.

My parents owned a printing operation up until this past year. They did packaging for batteries or G.I. Joe action figures. My father was hoping that I’d take over the company. I wanted to when I was little. I drank the Kool-Aid, but as I got older, I realized that I was interested in science and other things. That broke my father’s heart a bit.

My father said, if you want to go to art school I’m not paying for it; so I always avoided it. Then without realizing it, I was in the working life of a starving artist. It happened by accident.

Pinkish brick. We had lots of big trees in our yard, the kind that could be dangerous during a storm. I spent a lot of time in the woods—hiking, exploring, and walking. I took my kid most recently back to see my old neighborhood. There were swamps and waterfalls and this one path he said was like Yoda’s planet. He’s never spent time in the woods. To him, it was this mystical place.

There was this was Civil War-era graveyard with the grave of an 11-year-old boy. We went and had a séance with 11-year-old Ira, but he didn’t talk back.

My first close friend was Kyle Kutuchief. He became a well-known political blogger, as Ohio was this keystone lynchpin state. He was liberal. His father and my father would butt heads.

What was your scariest childhood memory?

I had a lot of nightmares as a child. I had night terrors where you sit up in bed and scream. I would be talking as if seeing the dream characters. My mother has these stories about the time I thought she was Jabba the Hutt. I was born in 1977, and my mom loved sci-fi, but she regretted showing me Star Wars. I was only four or five.

We played army men. There’s this catalog of U.S. Surplus with big knives and nunchucks, so we placed an order and got this big box full of army gear, camo face paint and tiger-striped [fatigues]. I got this knife at the store. The neighbors thought I was an adult since I was so tall, and called the police.

Did you have a favorite outfit?

I had a pair of Hypercolor shorts that I wore the hell out of. Also, these wool Australian army pants and this pullover with a barbell. The way I was dressing drove my parents crazy—I looked like someone out of communist Russia.

Trent Reznor. I was a huge Nine Inch Nails fan when I was a teen. I listened to The Downward Spiral every day.

I liked the idea of being a postman, and I was fascinated by astronauts, so I wanted to be a mailman on Mars. A mashup. Then, later, a research scientist.

I got this knife at the store. The neighbors thought I was an adult since I was so tall, and called the police.

What was your favorite childhood book?

The Lorax. I’ve got it right here on the shelf next to me. It was given to me by my Aunt Karol—my parents didn’t like her liberal influence on us. The inscription reads, “To make you aware of your environment.” It’s such a classic liberal thing my aunt would do.

I have a dented chest. I went to a private school with a swimming pool, and even as kindergarteners we had mandatory swimming time. It was always embarrassing. Shortly thereafter kids started noticing me, so I was always trying to hide that and I’d flex my stomach muscles.

What was the biggest trouble you ever got in?

I failed a lie-detector test at an NSA interview. I was interviewing for a summer internship while I was at Cornell. I saw a poster that asked, “What Would Will Hunting Do.” I went to Virginia on their bill and took a battery of psychological questions, like asking whether “I sometimes believe there are worms in my stool.”

But I’d already lied on the application form. One of the questions was if you had done any drugs. I said no, and apparently knowingly falsifying this form was punishable by prison. I was taking the test and then they asked the same question and I got a big spike. The interviewer refined it, asked more detailed questions about drugs. So I stopped the test and I left. When you’re in the bowels of the NSA, failing a lie-detector test, there’s not much you can do.

What was your favorite television show or character?

I really liked The Wonder Years. I’ve watched as a kid and as an adult. It was for Winnie Cooper. I’ve seen articles about her as an adult, but I want to keep her as she was. Do I really want to look up my childhood friends on Facebook? Those are memories I want to keep as kids.

What was your most daring childhood moment?

Oh, I don’t know. What’s the statute of limitations in the state of Ohio?

What was your favorite candy?

I stopped eating sugar when an uncle of mine, who was an alcoholic, didn’t eat sugar, as a test of addiction control. He fell off the sugar wagon, and I’m the guy who takes a challenge and goes whole hog.

Before I had any videogame systems, our neighbor had an Atari VCS. I remember playing Adventure,where you’re a little square running around. That was fascinating to me.

As told to Jamin Warren. Illustration by Trip Carroll