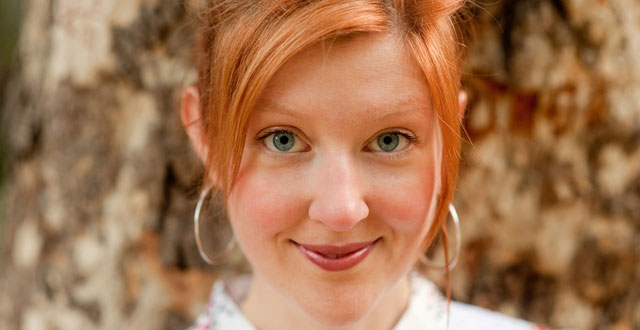 This is the first of a series we’re calling the Pre-Game Interview. Profiles of game creators tend to focus on the products themselves and ignore who the people are as creative individuals. We think that looking at their early lives might be a revealing way to think about game developers’ later output.

Robin Hunicke spent years working at Electronic Arts on the Sims and Boom Blox franchises before taking a role as executive producer at thatgamecompany. She is currently working on the studio’s third major outing, Journey, which is released later this year.

Where were you born?
I was born in Albany, New York and grew up in Saratoga Springs. It’s a horse track town. They run a special race called the Travers Stakes. All these people come up from New York City with jockeys and bring their “little” families and really big dogs.

I went to horse races as a child. I also spent a lot of time riding on my bike. There were places where horses were kept, and it was the kind of place where you could ride your bike in town, with old buildings. It was really very idyllic.

What did your parents do?
My dad was Homer Simpson. He worked at the nuclear power plant, just north of Schenectady. He was trained in the Merchant Marines. My mom was a teacher in Long Island. They got married and moved upstate. My dad ran the reactor through tests, and other times doing stress testing.

He was a quality nerd, and spent a lot of time thinking about process and making sure things were safe. It is similar to what I do! After a while, he became interested in “total quality management” and doing it right the first time. A third of what people do is wasted because of miscommunication and people not understanding each others’ motives. My whole life was an education in mismanagement.

What were you afraid of?
My biggest fear has always been blindness. I’ve always been sensitive about my eyes. My mom and dad were into colonial arts. We had a loom at the house and made our own paper. We had a really nice shop in the basement, but one year, a piece of metal got into my eye and they had to pull the metal piece out at the hospital with my eye open. Now I have this wigged-out memory about my eye. I was worried something would be lodged in my eye; and I trained as an artist when I was young.

Also, nuclear war. After seeing The Day After, I was afraid we’d die from some radiation sickness.

What was your favorite outfit?
My grandmother sewed most of my clothes, and I had this white dress that I loved so much. I wore it while my dad was tarring the driveway. It got so dirty that I took it off and put it behind the dryer.

What did you want to be?
An artist, a painter. And I spent a lot of time building things. I love watercolor and photography and woodworking. I thought a folk artist or field photographer. Now I’m a folk artist in videogames!

What kind of art did you make?
I liked to draw people without faces. I was frustrated how when you put a face on a person, it made them look a certain way. My teacher in high school criticized me. When you put a face on a person, you’re telling the audience what you think. I wanted to make paintings about the person without showing their face. I had all these crazy ideas where you could walk in front of a rippled shower glass so you couldn’t even see the painting. I was obsessed with this idea. Maybe that was a little bit creepy.

What was your least favorite childhood game?
I hated Monopoly. It was long and boring. My brother was obsessed with the money. The problem is that it has a bad risk condition where you get ahead pretty quickly. It’s random, and the fact you’re making random payments only makes things work. It’s really agency-free. It’s effective to show you that you can’t win, which is the point; but it’s not built for children.

Did you have a nickname?
Birdie. Because my name was Robin.

What were your childhood fantasies or daydreams?
I daydreamed that the trees were people and were alive. They talked to each other about the people in the neighborhood.  When I couldn’t sleep, I would think about the tree in my front yard and all the trees connecting to each other. That was a calming thought.

What was your first videogame experience?
Pitfall for the Atari 2600, with my friend Jody. Her dad was a doctor. She had this basement filled with Legos.  My memory was that it was filled wall-to-wall with them. She played her Atari all the time, so she’d play for a long time and then I’d play for a bit and I’d die immediately. I bought the cartridge when I was in college to try again, but I didn’t like it. You don’t own me, Pitfall!