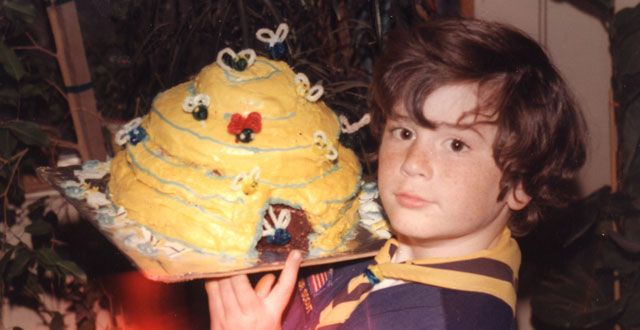 This is part of our ongoing series looking at the early lives of videogame developers. In this edition, Double Fine studio head Tim Schafer, whose credits include The Secret of Monkey Island, Day of the Tentacle, Full Throttle, Grim Fandango, Psychonauts, Brütal Legend, and Costume Quest, among other hits. He talks to us about trying to create a nickname, how videogames kept him company, and why he hates superheroes.

In Sonoma, California. I was the youngest of five children.

My dad was a doctor and my mom was a nurse. They met in medical school. Then my mom was a librarian and as a child, she worked as a butcher shop. My grandpa was a master sausage maker and master butcher. My father was a general practitioner. He also did surgery. My daughter loves medicine—she’s already pretending to cough so that I think that she’s sick.

Some white siding and brick. I would call it a ranch home, except it’s got a story more like the Brady Bunch home. Sonoma is a wine country town north of San Francisco. It’s one over from Napa. That’s where the money and fancy wineries are. In the hills though is the Falcon Crest home and the less-fancy valley of Sonoma. We spent a lot of our childhood roaming vineyards doing undisclosed childhood indiscretions.

It was a guy named Scott Martindale. He had a Steve Austin doll and it had a telescope that came out of his head. You could look through a hole and see out of his eye. It wasn’t telescopic. I never had those action figures and he had all of them.

I was into Legos too. People say Legos and programmers are connected. I don’t know; it might be true, but I was not socially advanced. I think playing with human figures helps you practice for social setups whereas Legos may help you think digitally. It does help you with an engineering degree, but not people skills.

We’d go bring a bucket down to the stream and collect pollywogs. Once, the school bully came over and kicked over the pollywogs. They went back in the water so I guess they were psyched. Someone asked once asked me the name of the bully and it was Bobby. Someone at my office recently pointed out that’s the bully’s name in Psychonauts. I didn’t even realize I had done that. That’s why games are art—because they reveal things about us we don’t even realize.

My parents had a kid every other year until the fourth one. I was separated by four or five years. What’d happen was, I’d get a boardgame and I’d try to get my brothers and sisters to play, but it was a kids’ game so they wouldn’t do it. They’d throw the game away, and I never got to play.

I guess I didn’t have a lot of friends, so that’s what made videogames so important. They played back. I could do them myself. Solitaire can’t surprise you; there’s no AI. But videogames play back with you. People talk about games and loneliness—it’s a lonely activity. I didn’t understand that. Gears of War was the first multiplayer game for me that I enjoyed. But I wasn’t sad. I liked being alone. I liked playing games by myself. I had lots of companionship at the house.

Mean dogs. I’d walk to school by certain houses, and a dog would come running out. You’d think he’d rip you apart and I’d never walk by. I don’t like dogs barking at me aggressively. When I see a fighting dog off the leash, I always pick up my kid. Those dogs look like Blutos.

Did you have a favorite outfit?

I always went barefoot. [Laughs] I had this really awesome space jacket—a replica of a space suit. There’s a picture of me wearing it with my dad, and I thought how awesome that coat was, and to I think I got rid of that. But my mom said otherwise: “Timmy, whenever we put that on you, you cried bloody murder.”

Dr. Demento. He hosted this syndicated radio show and he played novelty music like “Psycho Chicken” and old Barnes and Barnes stuff like “Fish Heads” and then Steve Martin’s “King Tut.” In sixth grade, I had the 45 of that. I thought it was good music. I loved Mork and Mindy.

Mr. Chris & the Instant Animals. This kid wants a pet. He buys from a shady guy in the alley and he pours them in water and gets this whole collection of them.

What was the first award that you won?

“Wacky hat” in fifth grade. It was a stovepipe hat, and it would open and then a skeleton hand would come out. I also won “most creative,” and made a beehive for the father-and-son cake-decorating contest.

We loved Mouse Trap. We would just build the trap, skip the game, and set it off over and over. It was a reward cut scene that we just played over and over again.

No. I’ve never had one stick, but I wanted one. At camp, there was a guy named J.T. and I tried to get Timothy John to T.J., but it didn’t work. There was third grade, where I was called “Tim Shave Your Butt” for the entirety of recess, but it didn’t stick either.

Bobby the bully called me Mushroom Head. I have this hair that’s smooth on top and fluffy on the sides. To his credit, he’s right.

There was a “magic rock” my mom would lift up, and under the rock was a bunch of bugs. Roly-poly bugs and worms. Somehow I thought that it was a magical world of insects and I wanted to go there. It was the same impulse as Pikmin—I wanted to go into that world.

What superheroes did you love? Did you ever try to fly?

I’ve always hated superheroes. I cannot stand them. I love Norse mythology, but I hate superheroes. They ruined movies, then comics and now games. I can’t stand that they’re making a Thor movie.