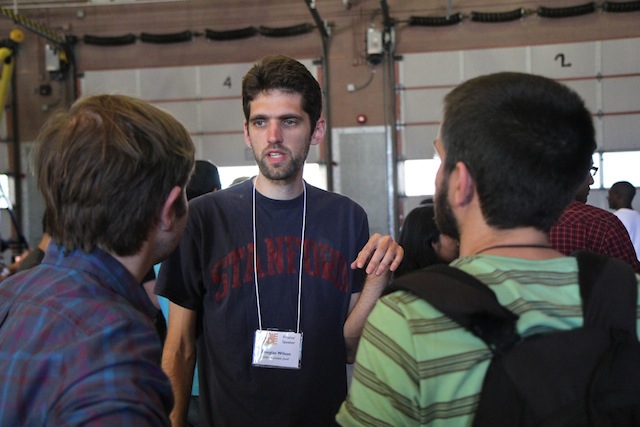 What are the strengths of the game jam format?

Game jams are particularly good for multiplayer and installation games. That’s the environment.  I’m surprised more people don’t do crazy installation games, because it’s the perfect setting to show them.  If you have all these people in person, take advantage of them. Make a crazy 8-player game. We hung fucking 20 Move controllers from the ceiling. I wish more people did that.

People get the wrong idea about what game jams are really for.  They see the output, they see a bunch of crappy, kind of bad games and they’re like “what the fuck, fuck this shit.” But it’s not about the product; it’s about the process. I think game experts who are skeptical of the output of game jams don’t realize it’s an end in itself, not necessarily what comes out of it.

How formal can a game jam be?

I’m going to make a distinction between ‘game jam’ and ‘jamming out.’ ‘Jamming out’ is more informal, and it’s a verb. Really exploring ideas, maybe doing something quick and dirty.  Often for me, it’s pretty collaborative. But you may not be working on the same project. Kind of like jamming with a band. It implies some kind of intensive burst.

How useful is it to work within the constraints at a game jam?

Maybe to my discredit— I feel morally guilty or something, it seems a little out of spirit to the game jam (so maybe I’m not doing the game jam the right way?)— but for the last few years, I don’t give a shit about the constraint.  To me, it’s just an excuse: finally some time set aside to work on something. Once you design enough games, you start picking your own constraints. I like to come in with the core of an idea. For the last few years I haven’t bothered with the Global Game Jam theme.

What is your method at a game jam?

Gee, I wish I had a more organized method. For me it’s just latching on to the hilarity.  All those games were done very collaboratively.  For J.S. Joust, we were just walking around with controllers on our heads. At the point where we were really laughing, we knew we were in a good spot. All of these game jam games happened to be really hilarious from the very beginning.

How did J.S. Joust come about?

There’s always this magic moment at a game jam, it’s like Saturday night, I can remember this at every game jam I’ve been to, you’re totally sleep-deprived, with people you like, and someone makes a bad joke, or you do something silly in the game. There’s this tired-giddiness, and everyone just starts giggling and cracking up.  That’s what happened with J.S. Joust. I only slept two hours that night. It was going to be this racing game, and maybe they’ll be able to horseplay during the race and that will be interesting.  We’re walking around the room. We [Wilson and collaborator Nils Deneken] would be walking past each other, testing the threshold, and both of us would hatch this evil plan and try to push each other at the same time, and both of us were cracking up. Then it was like, ‘Oh, this is a fighting game, not a racing game.’ It’s important to have other people in the room to mess around with. If it had just been me in this room, I would have forced it to be a racing game. But at that point, it was so early in the process, it was just like, ‘Okay fine, fuck the rest of the idea, we’re having more fun joking around and trying to push each other, let’s just do that.’