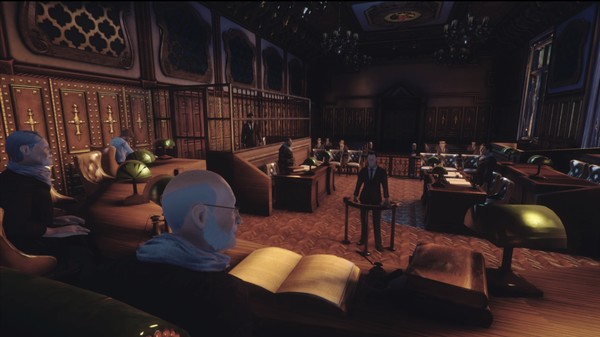 Bohemian Killing, released last week on Steam, is a game about being guilty. More specifically, it’s a game about being guilty and then convincing a court of law that you’re not. A courtroom drama that wants to avoid both Phoenix Wright camp and Law & Order plodding dullness, the main draw of the game is not discovering who committed murder or why, but instead constructing a lie believable—or not—enough to exonerate yourself. Your past is known; your testimony is malleable, and eager to be manipulated. If a blatant lie won’t do, sift through the evidence and twist it to your own desires, and if that’s not enough claim provocation, or coercion, or insanity. The jury is listening.

the mainstage act of lying flagrantly and gloriously under oath

Where many games would leave the player’s past actions up to hearsay—amnesia is highly contagious among protagonists these days—Bohemian Killing’s explicit guilt gives it meat, with nothing to draw away from the main act of lying flagrantly and gloriously under oath. You may have had good reason: Marcin Makaj, the designer, hinted in an interview with us in 2014 that though guilt is certain, motive is far from clear.

However, this doesn’t seem like a game that’s keen on getting one to confess. A solemn backstory and admission of guilt may be satisfying to watch, but to play, what can beat the tangled layers of excuse over excuse over excuse? After all, you get to watch these lies be born into truth as you play, your actions narrated by the protagonist at trial (voiced by experienced VA Stephane Cornicard) in a way reminiscent of Rucks’s narration in Bastion (2011). If you’re convincing enough, the court might believe anything.

Secondary to the plot–or lack of it, or abundance of it, depending on how creative you get—is the setting. Paris in the late 19th century with a steampunk twist. Racial tension and class differences feed into the cultural climate, some of which is implied to have led to the unfortunate predicament the protagonist finds himself in. Whether his intentions were noble or twisted is yet to be seen.

Bohemian Killing is out now on Steam and looks beautiful, but will the court be able to look past that beauty and decipher the blood on your hands? Jury’s still out.