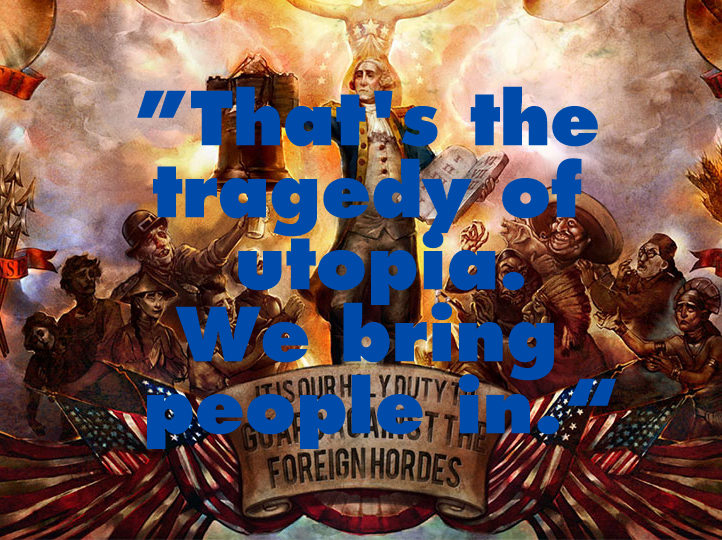 Despite the ubiquity of military conflict in videogames, not many games handle the topic of realism all that responsibly. EA’s promised that Medal of Honor: Warfighter would be the most realistic military shooter released last year, but the game clearly designed to dethrone Call of Duty turned out to be even more of a muddled jingoistic nightmare than even Black Ops 2 could ever hope to be.

What do these developers do wrong? BioShock Infinite, which comes out today, takes a rare and unflinching look at some disturbing themes in American history such as the racial supremacy and economic oppression embedded in the idea of American exceptionalism.

And while many games that try to approach such sensitive topics often get mired in controversy from fans and critics alike, Infinite has been met with near universal praise in its early press coverage. In the first part of our conversation, Ken Levine cautioned against game designers thinking that they can remain topical to the day-to-day discussion of political and social issues. In the second part of our conversation, we talk about what parts of BioShock Infinite’s magical realism he felt that he could keep realistic, and what’s better left to fantasy.

KS: Last time we spoke, you talked about how you like to put abstract ideas into the hands of real people and see how they played out. But you also admit that games aren’t necessarily real universes in the sense that they don’t mimic real life. It doesn’t seem like that’s what BioShock wants to do, even. So what do you consider “real” about those experiences? Where does it fall to this level of realism?

I think the thing that is very real about it is people’s motivations, what they want. Like Andrew Ryan, I understand what he wants. And in a way, there is a real world version of him that just didn’t have the resources to fulfill their dreams. She [Ayn Rand] wrote about characters like that.

You know, it is Galt’s Gulch. But unlike in Rand, where she can set all the rules for the characters so it all works in favor of her philosophy, I try to be more of a neutral judge and say: “Hey let’s really play this out. Let’s play out all these ambitions, and let’s give everybody proper feet of clay that we all have and see what really happens.”

And that’s the tragedy of the utopia, right? We bring people into them. And people and ideas…people aren’t as rigid as ideas are. Therefore, these experiments keep getting corrupted from the start. Quite often, either they explode or they transform into something much like what we have now! You know, it’s not an accident that society is the way it is. The soup simmered for thousands of years, and here’s where we ended up.

“These experiments keep getting corrupted from the start.”

But I think that people are very real in them. I mean, I believe there could be a guy like Andrew Ryan. I believe there could be a character like Tenenbaum. Her motivations…we try to tie them to very real things. Her transformation comes from maternal feelings being aroused in her. Booker’s got some very clear motivations in this game. He’s got a problem on his hands; he owes some people money, and he’s doing this thing because he’s got no choice.

We spent a lot of time both on Booker and Elizabeth establishing what their motivations are. With Elizabeth—you know, a lot of people compared her to Rapunzel or something like that, a much darker version of it. But what all the Disney films have is this thing [Alan] Menken and [Howard] Ashman, who wrote The Little Mermaid and Beauty and the Beast, called the “I Want Song.”

We have a convention that allows the heroine to sing her inner thoughts—with The Little Mermaid, she wants to be on land, with people; Belle wants to have adventures. I couldn’t have Elizabeth do that, right? Because that would be really weird. All of a sudden the gamer would say: “You know what, I accept flying cities, I accept all of this…but I do not accept that.”

Why does it stop there? If she was sitting there singing, “I’m waiting for my prince to come,” or something like that?

God, who knows! I had this great conversation with a friend of mine; we were talking about the end of Inception where the top is spinning. People argue over whether it falls over or not, if that was in reality or if he was in dream. And my friend said: “He’s not in a dream, he’s in a movie!”

What he meant was the fact that it doesn’t matter if he’s in a dream or in reality. He’s not in either! If you step back in reality, what is the actual the difference? It’s all fiction, it’s all made up. Like, this can of soda [taps soda against the table] is on the table, right? Our experience supports that notion. But, really, in a piece of fiction, the rules are what we emotionally attach them. So why is a floating city okay but a girl singing a song not okay? I dunno, but it’s not! So you can’t do it.

So what we did say was say: “Okay, how can we then get across her ambitions and her goals?” The notion of her being in a tower and observed—not just trapped, but observed, the tower was designed to observe her specifically—was very helpful. Because then you have an opportunity to see who she is and what she wants when she doesn’t know she’s being observed, just like Belle is not aware of her being observed, at least in the fiction of the world.

But also the player then gets to be painted with the brush of the creepiness of the observer. Because she is being intruded upon; her privacy is being invaded and you’re now complicit to some degree. So that was useful…once we figured that out it really made her introduction work. For the longest time, we were like, “What are you gonna do, go in and have a ten minute conversation with her about what she wants in the world?” By the time you meet her, you know exactly what she wants.

A lot of modern, data-driven political science and econ is motivated by a similar idea as the one you mentioned—putting an idea to test as a variable in some elaborately constructed, perfect, and self-contained system…

Perfect, or self-contained? Or both?

Well it might be “perfect” insofar as you can hold all the values to be true, at least as you want to maintain them. But what do you think is different about how games handle this type of experimentation or analysis versus something like, I don’t know, an economic simulation?

In terms of their accuracy, if you did your research, there’s no reason that games couldn’t be accurate. But the ability to express the stages at which things start to break down is stronger in a game. That’s what I spend most of my time thinking about—how does Rapture break down? How does Columbia break down? In Rapture, it happened in the past. In Columbia, it’s all happening in real time in front of you.

We think we’re these sort of machines that can act on ideology perfectly. And Andrew Ryan finds that when it really becomes clear that his ideology is not going to save his business, he tosses the ideology and uses the government to take over Fontaine’s business! And that’s because when you’re an ideologue and your ideology fails you, you’re left with nothing.

He was an original artist on Spider-Man back in the day. He’s an objectivist. If you ever read The Fountainhead, he’s very much like the real-world version of Andrew Rourke in the sense that he would rather not get paid than compromise. He kept walking away from jobs because it violated one of his objectivist principles. And unlike The Fountainhead, he lives in a one-bedroom apartment in Queens! One of the most brilliant comic-book artists ever has been struggling, but he held true to his principles, which makes him more of a true believer than Ryan was at the end of the day.

Most people are not Steve Ditko. I mean, you can certainly drive up to Queens, knock on his door, see if he’ll talk to you, and have an argument about it. “Hey, wouldn’t it have been nicer if you were able to trade your talent in and gotten a nice house and x, y, and z?” And who knows? I guess Ditko would probably say, “No, I’d rather have my ideals be intact.” Most people aren’t that strong. Who’s to say what’s right or wrong? But once their ideology is tested…

It’s the same way people say, “You know, we have to compromise the country’s principles in times of extremism.” The argument to really make is: “No those are exactly the times when you don’t compromise the principles.” They’re there for the hard times, not for the easy times!

It’s funny covering the tech industry—general consumer technology, not just videogames—today and seeing how much has changed since the original BioShock came out. I’m working on a story right now about so-called “lifebands,” so I’m wearing this thing that tracks every step I take, how much I sleep, and all these other inputs. And then there’s this meter on the app that gives a happy face if you’re feeling good, a frowny face if you’re feeling tired…

How does it know if you’re feeling tired?

That’s the one thing you have to put in. Though there are others that measure your heart rate, stress level, things like that. But I remember reading this article that said, somewhat ironically, “Now we have all this technology that can you make you such a better person, and all you have to sacrifice is your free will!”

Yeah, that’s fairly utopian, right? There is a proper path, and that has to be based on certain ideals—you should weigh this much, you should do this. I was heavier a few years ago, and I struggled really hard to deal with that and lost about forty pounds. But there are tradeoffs! Like, certainly I could lose more. But I like ice cream, you know? Probably there’s an ideal that says I should eat more ice cream, there’s an ideal that says I should not eat any ice cream. You see food idealogues…there’s this one game developer that posts on Facebook all the time. He’s a paleo, and basically he posts these rants that say, “If you do not do this, you are inherently broken.” You can’t eat any grains, you can’t eat any of this.

But you know what? Yes, maybe I will die sooner. But I do like a nice loaf of bread every now and then.