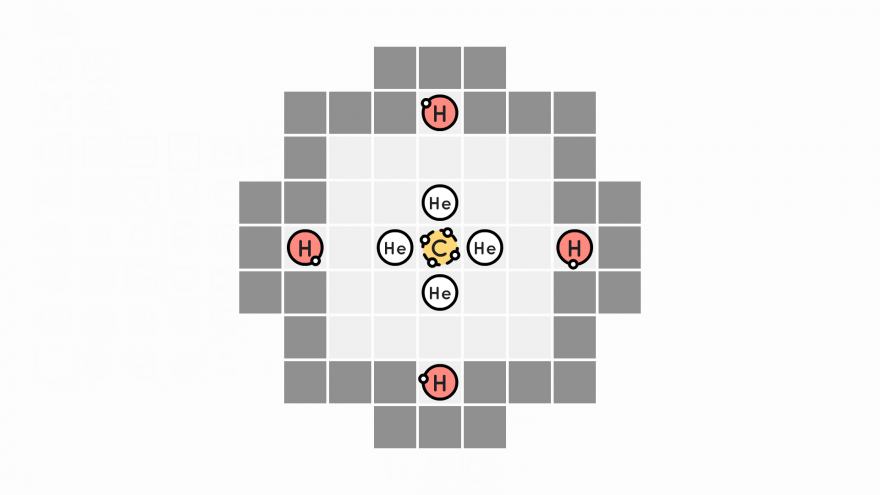 The beauty of a puzzle game is that it can be about anything, since the subject often serves as a red herring for the meat of the experience: the puzzles. A great puzzle game doesn’t need a story, or even any context, to be masterful (Tetris, anyone?). But by couching the puzzles in a larger environment they can become metaphorical, rewarding not only because you solved them, but because they further a storyline (Might and Magic: Clash of Heroes), provide intrigue (Professor Layton), or humor you somehow (Thomas Was Alone).

Of those categories, Sokobond most easily fits into the middle one. Created by Alan Hazelden and Harry Lee, two designers who met at a game jam, and Ryan Roth, who cut the future-ambient, waiting-in-line-at-Space-Mountain soundtrack, the game cuts a striking figure: clean, minimal, uncluttered by framing devices or special power-ups. The formula is simple: you control an element, and must use the limited bonds (represented by the circumambulatory electrons) of both your element and the others in the level to form increasingly complex chemical compounds. The difficulty comes from the limited space on each map, and the awareness that some moves will cause unwanted bonds to form. Simple additions, like bond splitters, double bonds, or the introduction of noble gases will lengthen the challenge, and often lead to levels where you’re flitting your atoms about haphazardly, trying to avoid the space around one hydrogen atom until you can connect your hydrogen to a nitrogen first.

This fits, since “Soko” is Japanese for “there,” although it more accurately inhabits a space that is between here and there (kind of like the Dark World in A Link to the Past). This sentiment abounds in Sokobond, as the game guides us through the bonding processes of molecules, its mechanic contingent on the ways they can and cannot interact with each other. Yet these connections tell us nothing of how these bonds work, or what the bonds are at all (remember the differences between covalent, ionic, and metallic bonds?). Biology is already made up of stratified zones—protons are made of quarks; protons, along with neutrons and electrons, form atoms, which then form molecules, which form cellular organs, which enable the many functions of cells, which themselves can specialize and beget organs, and all the way up to a sentient being, and beyond. It’s like a familial lineage in the Bible, with its bewildering sense of continuation, and provides a distance that is enforced by the minimalist, sterile presentation and the contemplative soundtrack.

So, do you need to be interested in chemistry to enjoy Sokobond? In college, I managed to sneak my way into a job in our Biology Department’s Laboratory. The job was tedious: I had to sterilize test tubes; measure agar, glucose, peptone, and yeast extract to make a petri dish; make sure the red pin was in the duodenum and not the bile duct; and other things to prep your Intro-level Biology class. But it brought me into direct contact with a variety of chemicals both familiar and foreign. (The most worrying temptation we had was the 5 kg. container of pure caffeine.) Most of these chemicals appear in Sokobond, and it’s refreshing to see such a normally dry topic handled with such fluidity and verve. Removed from the strain of having to balance a chemical equation, the chemicals are instead heralded for their intriguing spatial formations. This allows the repetitive mechanics to remain fulfilling, as you won’t realize until after you’ve solved the puzzle that you’ve formed methane for the fourth time.

Sokobond is a challenging, quiet game. But it’s also a fun game, as the post-level facts come out, telling you about the practical applications of these little elements you’re pushing around. The game is a blast to play, but if nothing else, it reminds us of the fact that our universe is made up of a discrete number of elements, and that they can combine in intriguing, illuminating, and irrationally amusing ways. Where else would you learn that Bombadier Beetles shoot hydrogen peroxide as a defense mechanism, or that the very same chemical is also used to bleach writing paper? Just as the puzzles of Sokobond are flexible and multi-faceted, so too are the chemicals they portray. With Sokobond, there’s a brave new world out there—or is it here?