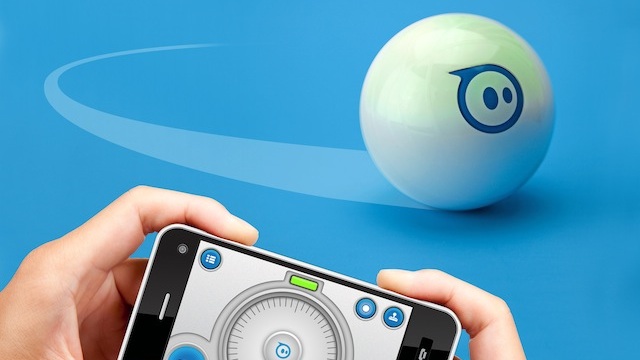 Game and toy companies have been attempting to breathe life into inanimate objects for generations. While gesture-based videogames have recently won the hearts, minds, and screen-gazing eyes of game players worldwide, toy companies stumble confusedly toward the elusive promise of a place known as mixed reality. We expect the toys from science-fiction films to be available now, but so far every single mixed-reality toy on the market exists in the earliest clunky stages of a long continuum ahead. Moreover, because it’s all too often true, tech toys are usually shrugged off as gimmicks. But that won’t stop the Gepettos of the world from tinkering with designs, media, materials, and even endless combinations of various realities until one day the wooden puppet will have a life all its own.

Two newcomers have mobile devices and videogame consoles interacting with toys in unexpected ways. The first, Skylanders: Spyro’s Universe, attempts to bring a unique identity to action figures with the help of rich videogame play. Its key feature is that each Skylanders action figure doubles as a memory device. As the site claims, “Skylanders are special action figures that come to life! Just take a Skylander, place it on the Portal of Power and BOOM! the Skylander will come to life in the videogame.” I spoke with Alex Ness, Producer and Chief of Staff at developer Toys for Bob, to give him the chance to defend against the typical criticism that tech toys are gimmicks.

Skylander toys remember their videogame achievements, levels, and powers; and that can create a sense of imbued identity for each individual toy. One figure, after gameplay, will likely be quite different than the same figure at a friend’s house. That said, because the physical play with the toys doesn’t add any real-world power to the digital side, are the Skylander toys, in their current state of development, essentially glorified thumb drives?

Definitely not in our minds. Your Skylander is a toy. Not to wax too philosophical here, but to us, toys represent childhood and all the cool, magical memories associated with it. Many of us have emotional connections to our toys. In the case of Skylanders, as you point out, your toy is not even the same toy as your friend’s toy down the block. It’s yours and only yours. And while everyone remembers playing with toys as a kid, the toys never remembered playing with you. But our Skylander toys do. They remember all the adventures they have with you in the world of Skylands. To us, that’s magic and that’s what we believe our toys are.

What are the biggest challenges kids face with the learning curve in Skylanders: Spyro’s Adventure?

I would say it was teaching people to upgrade their Skylanders. We try to communicate to the player how important it is to upgrade your characters as they progress into the later levels, but we also know that manual upgrades are [a role-playing] element of gameplay—and that’s not something our entire audience may be familiar with. Not only are the character upgrades important to do as the player gets deeper into the game, but the upgrade powers are a lot of fun to play with, too.

There is a real novelty in the combination of the physical toys with the virtual game. The narrative is extremely rich and relevant (the characters are Earthy, saving the planet). Aside from the combination of toy and game, how is the gameplay different from that of other videogames?

We’ve got a lot more playable characters than many games have. There are 32 totally different Skylanders—plus each one has 11 upgrade powers that generally change the way each character plays. Then we have a lot of optional areas that only certain Skylanders can explore. There are a lot of different ways to play the game. We put the choice in the hands of the player—probably more, and certainly in a different way, than other videogames have done.

Along those lines, your Skylander toy is platform-agnostic. If I play on my Wii at home but want to go over to a friend’s house who has the game on the Xbox 360, I can bring my toys over and play with them on his system, with all the upgrades and experience points and money the toys had over at my house. Then anything my Skylander buys or collects while playing on my friend’s Xbox 360 will go back with me to my place on the Wii. That’s definitely something pretty new to videogames, and also something people hopefully enjoy!

Sphero tries its hand at reinventing the wheel, introducing a whimsically tricked-out version of … a ball. Sphero is remotely controlled with a smartphone or tablet, but is also reverse-engineered so that the ball can become a controller for gameplay on a screen. Sphero’s glowing lights, combined with imperfect movements, give it a lifelike personality. Its golf app is also a magical experience, especially compared to the likes of Wii Golf. You swing your phone, and it passes over Sphero, the ball is prompted to action as though it connected with an invisible putter. I spoke with Paul Berberian, an experienced chief executive and entrepreneur who became the CEO of Boulder based Orbotix, developer of Sphero, in August 2010.

Mixed reality is already part of our daily lives, but at a basic level. Take for example the Nintendo Wii and Microsoft Kinect—they use real-world gestures to control virtual objects on our screens. Even basic tilt games on an iPhone or Android can be thought of as mixed reality (MR). When we talk about controlling machines, it gets a bit complicated. Simply controlling a machine directly with a computer interface is not mixed reality. But if the computer has to interpret the command to control the machine, then that can be an example of MR. It’s hard to tell unless you know the inner workings of the software. I suspect most high-tech medical machines, modern-day aircraft, and perhaps some sophisticated industrial robots use a form of MR.

Sphero’s basic drive app is a computer-interpreted control system—meaning you aren’t really driving the ball; you are commanding the phone, which interprets your wishes and then sends command to the ball, which then interprets and controls the motors to move the ball. But to the casual observer it feels like a direct connection. At the edges, MR won’t feel that different from what we have experienced in the past. Done right, MR will feel natural and simple to use.

I recently conducted an interview with a developer of autonomous toy helicopters and the relationship that world has, wanted or not, with the military. This might be an odd question, but given that context, is Sphero the kind of toy that has any implications for the military?

We have been approached by a few defense companies to explore military applications, but the interest is always surveillance. Having a super-cheap, throwable, repositionable robot that can detect certain types of information is highly desirable. The challenge is not whether we/they can make something; it is whether the soldier can carry yet another piece a gear on his/her person. Giving the soldier more information about any situation—especially in urban environments—can be life-saving. If we can help in that endeavor, then we are all for it.

Why a ball and not a vehicle?

In robot speak, the ball is considered the ideal robot. It can travel in any direction, has no appendages that can get stuck or fouled, and can travel across varied terrains. A ball is also very approachable: it is the world’s most popular toy; it is extremely versatile; it can be anything; everyone gets it without explanation; it is a natural form; it isn’t gender-specific; and it is generally associated with fun. [Sphero creators] Ian [Bernstein] and Adam [Wilson] wanted a robot that could become anything in the user’s imagination. No other object allows for that versatility other than a ball. An RC car will always be an RC car, but a ball can be anything.

“In robot speak, the ball is considered the ideal robot.”

How about Sphero and game design, since the ball can be both controller and play object?

We realized early on that we could take all the data Sphero was using to drive, and send it back to the phone. One of our engineers thought it could be a great controller for some types of games on your phone. Sphero can provide six axes of control data (basically, tilt and twist information in three dimensions). It was essentially found functionality—something we knew about, but never knew how well it would work.

Getting to augmented-reality games is all about getting feedback about the real world into the computer, so it can know what to do. Trying to understand the room layout, where the floor is versus the walls, what objects are where, and tracking their position as the user moves around, are the core of creating AR apps. The phones aren’t powerful enough to create really cool AR games, but they are getting close. MR is much closer, but we need feedback to create the action/reaction gameplay.

Do you foresee a future where there’s just reality, and everything we interact with—virtual, augmented, mixed—is as seamless in our day-to-day as life without technology?

Mixed reality is about creating new, immersive ways for humans to interact with computers and machines. It is not about creating the holo-deck and an alternate existence. Think of it as the mouse or GUI [graphical user interface] for the 21st century. We will have varying degrees of MR to ease and improve the way we interact with and use computers. At some point it will all be blended, but I suspect you will always be able to discern real from virtual.