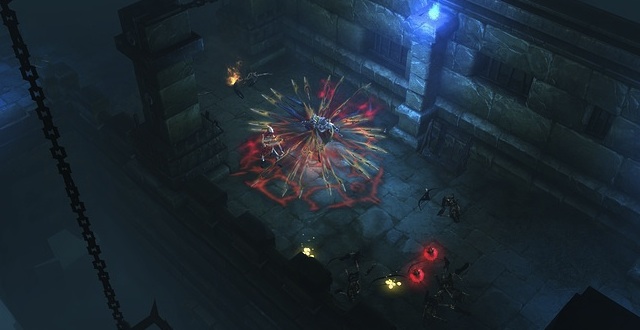 This past March, NPR’s “On The Media” ran a segment on the changing standards for how violence is portrayed in film—not in terms of how graphically it’s visualized, but how moist it sounds today compared to the dry, cracking punches of early crime fights. Videogames have a shorter history than film, but they have no shortage of lush compositions of violence. I got in touch with Joseph Lawrence, Blizzard’s sound design supervisor for Diablo III, to hear about the humble origins of the game’s gruesome noises.

What’s a sound that you really like from the game?

I’m a little biased because I actually did it, but the cackles of the skeletons when they laugh uncontrollably. I did them very early on when I was trying to figure out what those guys sounded like. You actually have to sit there and wait for a while, but then they just burst into this maniacal laughter.

That was before we were union, so all of that got grandfathered in. Now we wouldn’t be able to do such stuff unless I got a SAG card, but back in the old days we were able to do that.

I played as Witch Doctor, so I think a lot of my favorite sounds are those really gushy explosions. How did you get those?

Well when we started this game, we all knew that we were going to need an absolutely metric ton of gushy, gooey, squishy sounds. ‘Cause that kind of stuff is everywhere in the game. Over the years we’ve done numerous sessions for those—we’ve put our hands in giant vats of yogurt, glue. One particularly disgusting session that just looked horrible by the time we got done was this pile of stuff I’d been manipulating with my hands—it started off as bits of spaghetti, then I mixed in some yogurt [and] chocolate sauce; I think there were some packing peanuts. All these different liquids have a different viscosity and way they sound sticky. We used all manner of vegetables; by the time it was done there was this big pile of disgusting brown goo. There was even a New York steak at the bottom of it that I was slapping against to make splat sounds.

I can’t tell you how many trips to the grocery store I had to turn in to the accounting department when I’d bought 10 watermelons and crab legs. It’s like, “Mmm, what’s for dinner? Doesn’t really look very good!” [Laughs] The grocery store is just a playground for a sound designer. There are so many things there that make an interesting noise, and there’s no end to the combination of things you can squish together and smash.

You were basically standing in a studio alone with a large bowl of disgusting salsa?

Yeah, just moving it around, squishing it with your hands, hitting it with something else. You experiment until you find something that’s really interesting. Usually we’ll have two people in a room, because once your hands get completely covered in goo then you don’t want to be touching a recorder. So we have one guy running the recorder and the other one doing the goo-mangling. You’ve got to always be open to experimentation, because there’s really no book you can open that says: “How to manipulate yogurt to make interesting sounds.”

The thing also is that sounds are so soft, so if you’re not careful you won’t notice them at all. Sometimes we’d have to move the mic literally a half an inch away from what we were trying to record and turn the levels way up. You get a sound that’s really unique—something that the average person would never hear in a million years because they’re just not listening for it.

There’s a trick I’ve modified over the years as it’s evolved—originally you would have to light something on fire and then get away from it rather quickly. So you’d have to make these fuses with some gunpowder—I poured a little bit of gunpowder over two-inch masking tape, folded it over, and it made a great fuse.

Certain types of gunpowder would make these amazing fiddles and whistles as the fuse burned. So I started experimenting with these elaborate constructions of masking tape and gunpowder. After three or four trips out to the desert to do this thing, it really evolved. You see it especially with the Demon Hunter, but pretty much with every class except maybe the Barbarian. A lot of casters have the whistle sounds that we did in those fire sessions. I’m still working on that, actually.

“The grocery store is just a playground for a sound designer.”

What about some of the nonhuman voices in the game? One of my favorites is the Witch Doctor’s fetishes.

A lot of those fetish monsters came in as we trying to hit a really important deadline and we just had to get them in really fast. I actually think the fetishes are based in part on the little crypt-child voices.

Those are actually … I think it’s my voice. Those got done a really long time ago, back again before we were union. That was a really important tool that we don’t have anymore—because we’re sound designers, we know exactly what we want to do. We can hear it in our head, and a lot of us used to just do it on the spot. We would just grab a mic and spit out what we thought we needed and then take it and process it immediately.

The flipside to that is, some of the union actors that we use now for monster noises are absolutely amazing. Some of the stuff they do, it just doesn’t sound like it’s coming from a human being. You watch these people and you’re like, “That is not possible; that dude is possessed or something.” I miss the days when we could have done more of that, but at the same time now we’ve got this stable of monster actors.

Specific actors that only did monster voices?

Yeah. Dee Baker, he just does some amazing stuff with his mouth. [Laughs] I guess there’s no other way to put it. He sticks his fingers in his mouth, he’ll put objects in his mouth, anything goes. There’s a lot of people we had come in just to do that. We’re pretty lucky to be that close to LA to get access to the talent up there.

How did you work with making very heavy impacts in the game register? The Barbarian has so many abilities where he makes the whole ground shake in one way or another.

Very early on in this game I realized that I wanted it to be: If you hit something, or when you break an object, it had to be powerful. I wanted you to want to hit something, because it’s so satisfying. Generally when you hear stuff like that, it’s not just a single sound that’s firing. We’ll have the main body of the sound—say the impact, which will be a solid mid-range thump. Then over the top of that we’ll have another randomized layer of sword sounds—the metal content. And then there will be another layer of squishy sounds. Each one of those layers has multiple sounds that we’ll randomly pick, so if you have, say, ten permutations in each layer, you’ve got a pretty big range of randomized possibilities.

Because this is a hack-and-slash game—you’re out there just whacking on stuff and blowing stuff up. It has to be satisfying, because that’s all you’re doing!

How do you see the sound in this game relating to the sounds in Diablo and Diablo II? In my write-up of the beta I commented on the whistling of the loot-drop that brought me back to the original game.

It was always a question of which ones we were going to use, which ones made sense, which ones we thought we could make better. We wanted to pay homage to the earlier games and keep a sense of continuity. Over the years a lot came in, and a lot went back out. One that’s the most recognizable we called “the flippy sound.” When the monster dies and the loot flips out, there’s a little [whistles]. That’s the same exact sound from Diablo II, it just made sense! I couldn’t imagine trying to make that one better—after a while you don’t even hear it anymore. But the older fans, they loved hearing that.

Another one is the health well, that [slurps]. The original gold sound just wasn’t holding up under the compression that we were using—often high-pitched metallic stuff will just totally break down under compression. It had to be something new, but close enough to the original that people still appreciated it. It’s there because it’s gold, but after an hour or so you kind of tune it out.

After speaking with Joseph, I sent over a list of some of Kill Screen’s favorite monsters and moments from the game to see if they could chime in more specifically about the ingredients in each. Sound designers Michael Johnson and Kris Giampa weighed in as well.

Mike: The Festering Maggots were made by me by combining two predominant layers: The first was a recording of a wet silicon oven mitt being folded back and forth, and the second was various goo and gore sounds that fellow sound designer Jonas Laster had recorded by utilizing hand soap and other gruesome things.

The Toad of Hugeness

Mike: The vocalizations for the huge toad from the “Plague of Toad” spell were made by pitching down real recordings of bullfrog croaks. The tongue-whoosh impact on the enemy target was a bullwhip highly saturated and compressed for effect. The swallow was just a recording of someone taking some gulps from a cup of water and really close mic-ing it for that proximity effect that you get. That really sold the size of the frog for me.

Kris: Rapid Fire took many iterations before we stuck with the one we shipped with. We wanted to have it sound aggressive yet organic at the same time. It basically consists of a few layers that are triggered randomly with every shot, which happens very, very quickly. You will generally hear the wooden “chunkiness” of the crossbow, along with some low-end thumps mixed with a ricochet type of sound every now and again to give it a little bit of a machine-gun type feel. Along with each projectile shooting off, there is a “firey” type of loop attached while also triggering aggressive sounding one-shot whooshes as it flies away from the player. We didn’t want the loop to be too audible for the player, as it could easily cloud up the mix too much. So you don’t hear the “firey” loop of the projectile too much as it flies away from the player, but you will hear it more obviously as it flies by your head if you play co-op with another Demon Hunter.

Mike: The vocalizations for the Demon Hell Bearer (Siege Wall Monster) were performed by voice actor Fred Tatasciore and recorded by Mike here at Blizzard. Once we had the recordings from the voice actor I pitched them down quite a bit and layered in all sorts of animals—primarily pigs, tigers, and bears. The Vomit Soldiers (Demon Troopers) were basically Fred Tatasciore pitched down with some bass-enhancement plugins, and then layered back on top of themselves, offset, and recorded out as a final audio file.

Mike: The actual spellcast sound was a mixture of verbed-out voices, lava bubbles, paint splats, and some steam iron chuffs. The residual acid loop that you hear after the spell is cast is actually Mike recording some heated-up olive oil in a skillet with water being trickled down into it.