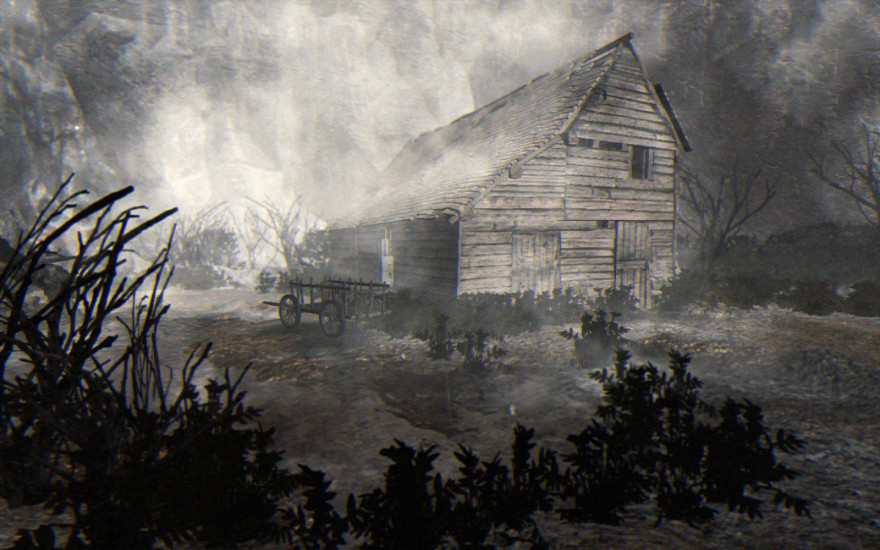 Sylvio was a humble ghost-hunting horror game in the foggy, abstract lineage of Silent Hill. It also boasted an indelible protagonist in soft-spoken Juliette Waters. Her resolve through all manner of supernatural phenomena makes you, the player, feel a bit better about the screaming ink-black blobs milling about as you investigate an abandoned amusement park. Using EVP recording equipment, you can capture the whispers of the dead on analog tape, scrubbing back and forth to pinpoint clues about how each spirit met their end. Yeah—Sylvio is a game about helping ghosts find peace.

Now designer Niklas Swanberg is back on Kickstarter with Sylvio 2, which swaps the tape machine and amusement park for a video camera and a gnarled, misty open world. Check out the new trailer premiering below, and then read Swanberg on horror, Twin Peaks, and Ingmar Bergman.

Kill Screen: My first question is simple: Why do Sylvio 2?

Niklas Swanberg: When I was in the last year or so of finishing Sylvio, the story was set. I couldn’t add anything to the game, or I wouldn’t have finished it. I really just needed to discipline myself out of the creative zone and force myself to finish. You know, fix bugs, create GUI, make stuff logical for a player. But new ideas kept coming nevertheless, and by the time Sylvio launched, I had a skeleton for a sequel living in my head.

I am very fond of that park, the concept, and the main character. I believe there is so much more content, characters, and situations yet to explore, and that’s why I feel it has to continue. Also, I feel the communication with both the living and the dead can go so much deeper than in the first Sylvio. In Sylvio, there was a point in keeping Juliette isolated, but now I’d like to occasionally break that isolation and give her direct social interaction, which means more focused objectives and situations.

KS: What’s behind the switch to video? Can we expect any found footage elements to sneak in?

NS: The reason is to deepen Juliette’s communication with the spirits, to deepen their story and their characters. I am also very interested in experimenting with movement, how a spirit moves in different speeds in different parts of the recording, where it goes, how it moves, why it moves. It can be a part of puzzles, it can tell you things that speech can not. Lastly, I believe it gives the player a sense of presence to have their movement, zooming and panning recorded, while they record the sounds. It’s still very much in the experimental state, but I’m very excited about it as a concept.

I am intrigued by the found tape concept, but I don’t think it would be a big part of the story. It would be fun to find VHS tapes of something like a children’s show though, or lost family vacation footage. Just as an extra.

KS: What’s scary to you?

NS: When a familiar situation becomes unexplainably unfamiliar, that’s horror to me: when logic tells us something should be one way, yet it’s another, and there’s no way to control it, and there’s no way to predict what will happen. That’s why I enjoy horror games from other cultures; I can’t read the words in between the lines, so I’m all alone with what’s happening. But when I see a film from Sweden or the US, I can always rely on my past film experiences, or my knowledge of acting, or anything else familiar in the setting to explain the situation. I believe all horror must always strive to be unique and original, in order to place the viewer somewhere unsafe.

KS: Do you see Sylvio to be a straight-up horror game or does it simply deal with the supernatural?

NS: Even though I know Sylvio is technically a horror game, in my mind I like to see it as just a game. A game that has disturbing parts, and darkness pounding beneath a calm exterior. It’s realism, but evidently there’s something supernatural going on. But you can’t really be sure, you know? Nothing is for certain, you’ll just have to tolerate that it’s happening to you, and hopefully eventually you’ll understand why, unless you lose your mind first. It isn’t there to be scary, it’s just simply there.

KS: You mention film; is there any cinematic DNA in Sylvio 2?

NS: That depends. The foggy, grey look, I think is very cinematic. A bit like an old Bergman film, maybe. I remember watching the cinematic trailer for The Witcher 3, before there was any gameplay footage at all, and I remember being so pumped up. Not because of the graphics—I knew they were prerendered. But in my naivete, I thought the whole game would have that colour palette to it. Later, when I saw how the game actually looked, I was really disappointed. I mean of course it was beautiful—the trees, the skies, the winds, all beautiful. But it was just so colorful, it was exactly what you expect—I’d wished for the whole world to be that dark grey, muddy and hopeless.

As for cinematic in any other sense—the sound design and musical scores, yes, very much so. Some of my absolute favorite all-time scenes are the dream sequences in Twin Peaks. The way they used backwards speeds to manipulate the voices—I just knew there had to be a way to use it in a game. It all came together after combining speech in different speeds with the diffuse quality of EVP recordings, and giving the player the playback controls. I knew I’d found something different, and the audio recorder became the core of Sylvio. So naturally I had to make my protagonist an EVP recorder.

KS: Who or what inspired Juliette? She’s such a unique character, from her quiet voice to her profession.

NS: Many years ago I played a game called Broken Sword, where the protagonist was a female journalist. She spoke in a French accent, commenting everything around her and I just fell in love with the mood in the game. I think a lot of that game’s calmness inspired Juliette’s character. Also, I don’t believe in putting emotions on players by telling them that the character is afraid, like using hard breathing or angry speech. The effect is much stronger if the player is alone with his or her feelings. I wanted Juliette to be strong, intelligent, and calm, because that’s a bit rare for a female character in games.

You can support the creation of Sylvio 2 over on Kickstarter. You can download the Sylvio 2 prototype on itch.io.