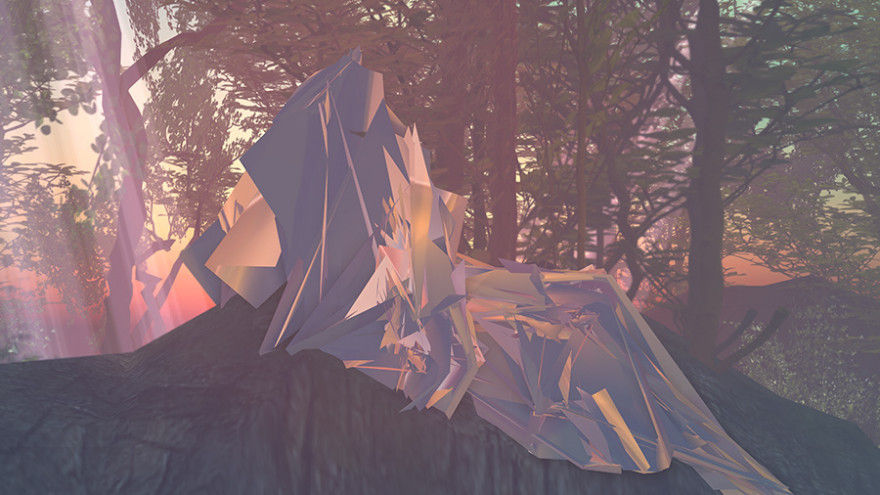 Nostalgia can feel a lot like homesickness. We often talk about videogame nostalgia as defined by 8 or 16 bits, but this aesthetic fails to acknowledge different styles of games and their accompanying styles of nostalgia. Some nostalgia, in other words, cannot be captured by the art of pre-3D platformers and arcade shooters. This is the kind of nostalgia specific to titles where becoming the game is a key aspect of its play—games whereby becoming an avatar you become a part of the environment and a part of the narrative.

My first taste of this type of game was Star Wars: Knights of the Old Republic II. There’s no way to explain how this game, sans predecessor, made its way into the pile of junk by my family computer, residing there for some time before I decided to pick it up and play it in high school. It was just there amongst tangled wires and the subpar educational games my anti-violence school teacher mother would allow. KOTOR II begins like a standard RPG, wherein you make an avatar and suffer through a thinly veiled tutorial level. The first section of gameplay is devoted to discovering why your avatar wakes up on an almost uninhabited mining planet. This section aboard Peragus II is widely hated (to be fair, the whole game is widely hated) for its tediousness and length. And in reality, it isn’t the best opening sequence in game history, but that hasn’t stopped it from crystallizing in my memory. The way I remember wandering the eerie halls, amongst corpses (not all dead) and hostile mining robots—it might as well be the best opening sequence ever.

LaTurbo Avedon is a digital artist who understands this type of nostalgia. “It is really nice when you find places inside of RPGs that have a feeling of staying, sort of like visiting Fisherman’s Horizon in Final Fantasy VIII. Even typing the name I can recall the tune from the location and the different houses.” This nostalgia is much like homesickness. You find yourself longing for a space that never existed, wanting to visit it over and over again. Like many artists today, LaTurbo is difficult to define purely through the medium she works with. Even though she experiments with different digital media, she primarily creates renders in Unity and Cinema 4D. But even describing them is difficult. They don’t look like anything real. LaTurbo’s figures are so strange and otherworldly it’s easy to get lost trying to understand what exactly you are seeing. In her Transplanted Objects series, she installs undefined, deeply complex polygons into ambiguous 3D environments. The artificial nature surrounding the sculptures looks like it could be from any game, deep in the woods, off of the trail you were intended to follow. These reflective alien objects embody the essence of the surrounding space. Their solidity in the space gives off a sense of permanence; it’s impossible to separate the sculpture, the feeling, from the surrounding terrain. The result are environments that look and feel like somewhere you have been before.

“There is this really amazing preservation that happens in game spaces, and it’s something I think about a lot with my work,” she told me. “If you boot up your copy of Dark Souls after years have past, it is actually pretty amazing how you can find yourself suspended exactly where you left off. The places you’ve probably familiarized yourself with more than your own neighborhood are still there, even if you haven’t been. There’s a lot of memory associated to these game spaces and I try to connect to that feeling somehow.” Real-life places are in constant flux, in other words, but games never change. LaTurbo captures this. We experience these places as flesh and bone intruders; we can visit, but we will never really belong.

LaTurbo, on the other hand, presents herself as more than a virtual tourist burdened with being a real person. She is not a real person.

It is difficult to capture game nostalgia outside of the common pixelated aesthetic. Not every game can enthrall the player so deeply they lose consciousness of the hardware separating them from their avatar. This is due to factors that go beyond just the game itself. The effect a game has depends a lot on the person who is playing it. For a 14-year-old girl who always wanted videogames but had only really played Nancy Drew and Carmen Sandiego,

KOTOR II had a considerable amount of power. If I played it now, it would not. When you play as an avatar in a game, you are inserting yourself into a world with which you are incompatible. This is why, when we speak of games we have intense nostalgia for, it is difficult to separate the circumstances in the game from the circumstances in your life. Are you remembering the avatar you were when you were playing the game, or are you remember the person who played as that avatar? Is there a difference?

The answer, I think, is yes, and that difference is LaTurbo Avedon, who does set up a scenario where she is never anything less than pure render. When speaking of games, she will not reference who and where she was in life while she played it. When talking about her work, she will not mention the difficulties real-world artists have. Her body of work as a whole is exactly what an avatar would create. She renders standalone sculptures similar to those from Transplanted Objects. She takes selfies. She makes videos with titles such as “HUD Rave” and “Soc Net Vogue.”

LaTurbo’s presence is not only limited to games. Carrying an avatar over from one digital space to another only makes sense. The person you try to be as an avatar and the person you try to present as yourself online are very similarly unsuccessful and incompatible with reality. As an avatar, LaTurbo’s presence is as natural in digital spaces as it is in games. Facebook, in particular, is where she completes her repertoire. Like her sculptures, it is difficult to explain what LaTurbo looks like. Her appearance is in constant flux, fluid but not unfocused. Some features are quintessential LaTurbo; blonde hair, circular sunglasses, strappy stilettos, a Nyan cat face tattoo.

She crafts her image from “lots of little pieces—Quistis Trepe, Petra Cortright, Miley Cyrus, Madonna, Cammy.” This carries into the games she visits: “when I appear in Skyrim I have to forego a lot of my favorite accessories/hairstyles, but I enjoy how I can take up a little bit of a different story each time. There’s a different part of me in each title, and playing more games just makes that variety even greater.” Everything about LaTurbo is a conscious reference to something else. Her video piece Final Fantasy turns allusion into poignant poetry. The short film features her shadowy outline jumping up and down slowly as a mechanical female voice recites familiar lyrics. Each line comes from a different source, from Vanessa Carlton to Donna Haraway. She is a blank slate defined by the pieces she puts together. LaTurbo’s chameleonic qualities are reminiscent of a lot of contemporary pop icons, but she executes this fakeness in a way that, like her game nostalgia, is wholly authentic, multi-layered. An avatar is fake by design. Renders can become whatever they want as easily as they can be sculpted. We expect fakeness from an avatar, just as we expect fakeness in the darkness of nightclubs and in the pages of magazines.

She is a blank slate defined by the pieces she puts together.

I talk about KOTOR II so often it led one recurring acquaintance to ask me, “Is that the only videogame you’ve played?” While the answer is clearly no, I would say that technically, it was for a long time the only game I did play. Over and over. Even through the tedious intro on Peragus. KOTOR II let me in on something I had known I was missing for sometime, sampled through the sleepovers spent on the hostess’ computer playing Barbie’s Horse Adventure alone, the punches exchanged with neighborhood boys who would not let me play Call of Duty, the few bargain bin Game Boy games my family could afford. I will forever associate KOTOR II with thinking to myself: “This is what a real videogame is like.” You spend so much time in some games that we can’t help but become attached to them. And while we are attached to the game itself, we are also attached to everything that comes with it. The seat we were sitting in, the life surrounding that seat. LaTurbo presents a scenario where all of that excess is stripped away. She’s completely fake, from a fake space, created from pieces of fakeness. The best part is that she takes all this fakeness seriously—as seriously as we feel nostalgia for rendered places existing only within software. It may all be fake, but it doesn’t make the experience any less real.