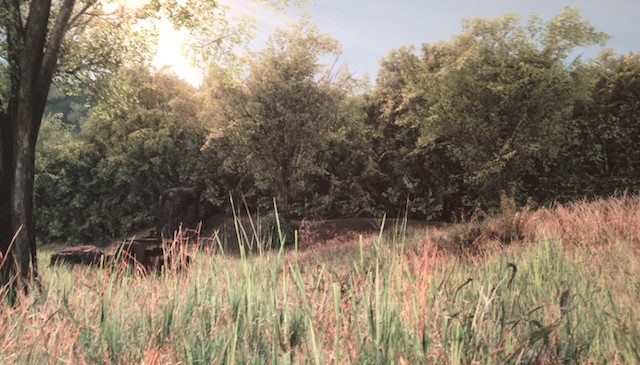 In the realm of media art, Mark Tribe, who often works in installation, video and performance art, is a name to know. As a curator, he has produced content for Mass MoCA’s Game Show and is the pioneer of Rhizome, an organization that supports emerging artistic practices that engage technology—especially net.art. His scholarly endeavors include teaching in the Art Practice MFA program at School of Visual Arts and teaching Modern Culture & Media Studies at Brown University.

Tribe’s artwork is currently featured in the solo exhibition Rare Earth at Momenta Art. Tribe questions the boundaries between real and virtual worlds through photographs of vivid videogame landscapes and an exceptionally still video of a militia training ground in Upstate New York. Are the landscapes our avatars walk on all that different from our very own?

What did the Rare Earth project grow out of?

As I was doing research on militias [for another project] I discovered that a lot of militia groups post videos of their training exercises on YouTube. When you look at them, YouTube recommends other videos. At the same time I had been working with a student who had been doing machinima. I noticed a lot of gameplay videos of first-person shooter games are visually similar to the militia training videos.

One of the things they have in common is the landscape. These landscapes are backdrops for military activity. I started to think about militia members who also play videogames and about whether when they’re out there with real weapons in the woods, of Michigan or wherever, if they are kind of reenacting what they’ve done on the screen. Normally, I think of videogames as the fiction that’s trying to recreate reality, but then I started to realize that people are kind of re-performing what they do in videogames.

The blur between real and virtual is a very interesting issue when it comes to drone pilots.

And drones are basically piloted planes, but from afar…

Typically they are flown by air force pilots who operate them out of trailers. I know there is a base in Las Vegas and there’s one in Syracuse, and there are probably several others. And they’re flown halfway around the world. I think it’s a pretty intense experience for them, and at the end of the day they hop in their car and drive home from Vegas to some house in the suburbs. Some of them are contracting PTSD from it. It can feel that real.

John Perry Barlow—he’s a former Grateful Dead lyricist who was one of the founders of the Electronic Frontier Foundation, and he’s this kind of cyber culture pundit. He sent out this tweet, something like, “If this were science fiction, the side with the flying killer robots would be the bad guys.”

Why did you feel static imagery over machinima or creating a game was the right way to go in speaking about this blur of reality?

I thought about it. I wanted to distance them a little from videogames. I wanted to put them in the dialogue of Western representation. A dialogue with art history, like the paintings of the Hudson River School. I felt like still images were the way to do that. You can see the resonance of those art historical images in the landscapes that game designers are making.

A lot of people are doing landscape photography in videogames and posting their stuff on forums. There are whole forum discussions about how to maximize the resolution. Whole categories, like “time of day” mods where you hack the game and modify the time of day to optimize the lighting for your shot. There are a lot of people making their own maps and levels, not really for the purpose of traditional gameplay, but just for wandering around.

In a past interview you spoke about how net.art, in a way, realized this dream that video art once had. Where do you think games exist in that portion of art history?

Video art existed in this kind of dialectical relationship with television,where television was the evil parent and video was this sort of rambunctious rebellious child. There was this dialogue with video. Television had this huge audience and video art had this little tiny audience. It’s a somewhat similar relationship between contemporary artists whose work is either about games or uses games to make their work, or those who make games and the game industry as a whole.

This dialectical or dialogical relationship involves artists trying to do something with the medium that it wasn’t meant to,or taking a critical look at it—like this project called Velvet Strike by Anne-Marie Schleiner, Brody Condon, and Joan Leandre. It’s a pretty old project where they did these performative interventions in Counter-Strike, putting pacifist sprays on the walls.

The audience for what I’m doing is teeny compared to the audience for the games in which I am making photographs. I’m not doing this to say that games are bad, but I have a critical relationship in that I’m sort of thinking about assumptions, consequences, implications,and aesthetic dimensions.

As a media artist you often have to consider the installation of the artwork. How did the gallery setting influence Rare Earth?

I did conceive Rare Earth specifically with an art gallery in mind. Which really influenced how I decided to print them, on what kind of paper, how big; they’re on this matte paper and they’re framed with white shadowbox museum-style frames.The smaller ones are about two by three feet and the larger ones are about four by five feet. Those are common sizes that you would see on the walls of an art gallery or museum.

I could have printed them on glossy paper and placed them onto Plexiglas and floated them so there’s no frame. And a lot of contemporary art is framed or mounted that way. And that would make them look a little bit more like screens,because they would be really shiny and have that kind of incredible depth of color. But I really wanted to emphasize how similar they are to the images you would see in a coffee-table catalogue of landscape painting.

Without reading anything before visiting, do you think viewers would just see the images as real-world landscape photographs?

Most people—as far as I can tell, younger attentive viewers, people who look at art—come in and think these are photographs. And then they quickly realize they are not photographic, and then they think they look like photographic reproductions of realistic landscape paintings,and then it becomes clear that they are computer-generated. Almost no one guesses they’re from games. It says, “Huh—games have really come of age in a way.”

It’s now to the point where you really can’t quite tell what they are. You can’t tell that they’re not something else. Which really points to this kind of collapse of the difference between simulation and reality. Which is something that theorists have been writing about for over 30 years, like Baudrillard, this French post-structuralist; and the whole cyberpunk fiction, William Gibson’s Neuromancer, Neal Stevenson’s Snow Crash, was [concerned with] the collapse between virtual reality and real life. And we are now witnessing it—now it’s really happening.

Last question, why was the exhibition titled Rare Earth?

I don’t have a very clear answer for that. It did feel like these images were images of Earth, but it’s not the one we know. It’s this weird, rarified place that you only see if you go into videogames. It’s not real, but it’s a place where people go and interact with other people in a multi-user mode. Lots of people lay eyes on those trees, and then in some way it is somewhat real. I was thinking about this expanding territory. Nature is being created, really, really, rapidly in videogames, and it’s disappearing really, really, rapidly in the real world.