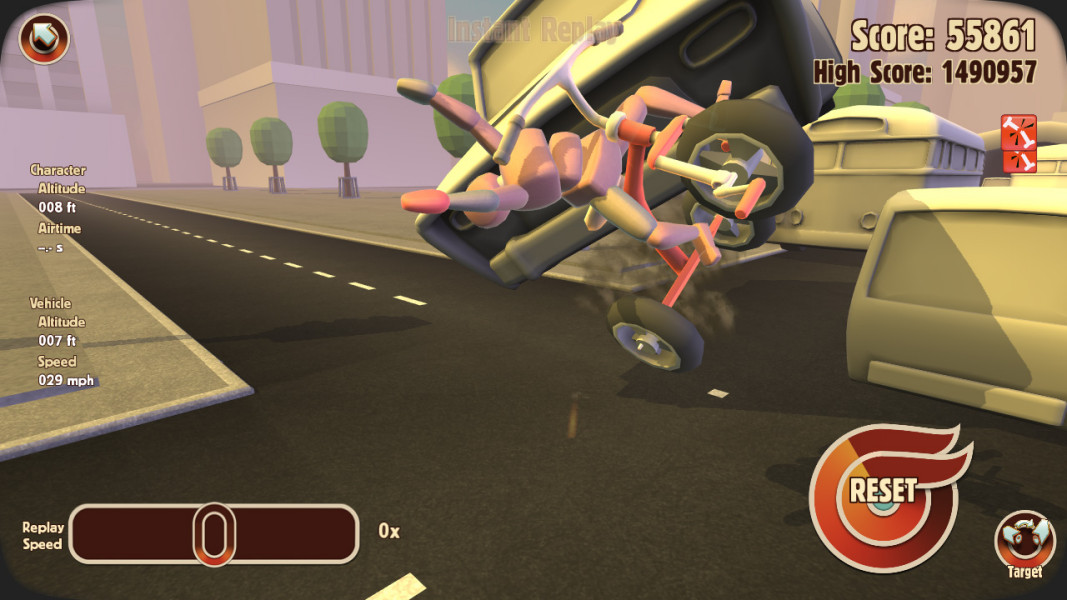 What’s so funny about ragdoll physics? In the early goings, ragdoll tech was primarily used to make death animations more environmentally aware, taking into account the directional force of projectiles and the architecture of surrounding objects, instead of merely playing canned sequences. Ragdoll is an attempt to make these death throes look more realistic, but they are often anything but. The ragdoll physics flip on like a switch when a character’s health bottoms out at zero, instantly turning it into a weightless, oddly flexible corpse that flops to the ground and squirms about until the algorithm finds a resting place. In games like Dark Souls you kick around the bodies of the slain like a ball pit of half-inflated balloons. Ragdoll deaths are so absurd, they become darkly comic, as if all of a sudden your intense dungeon crawl has transformed into Weekend at Bernie’s.

Plenty of games have tried to capitalize on the comic absurdity of ragdoll physics—“simulation satire,” let’s call it. There’s even a website dedicated exclusively to free ragdoll games, the most popular of which tend to focus on the death and dismemberment of some poor avatar. These figures are treated essentially as crash-test dummies, whose sole purpose is to be hurtled into a brick wall for the player’s amusement.

Secret Exit’s Turbo Dismount is a game that more or less follows the standard ragdoll formula. You place the aptly named Mr. Dismount in a vehicle of your choosing (sports car, tricycle, fire truck, among others) and send him careening down a runway toward certain destruction at the hands of oncoming traffic, ramps, walls, or any other of a variety of obstacles you select. The difference the developers are going for with Turbo Dismount is to buck the trend of ragdoll games as “sadistic torture simulators” by creating some sympathy for the titular pain-inflictee.

“Mr. Dismount is not a crash-test dummy, he’s an abstraction of a human figure,” says Jani Kahrama, designer on Turbo Dismount and CEO of Secret Exit. Mr. Dismount is a fairly blank avatar, bearing resemblance to those little posable wooden mannequins used as models in art classrooms. “By having a simplified, abstract visual style the viewer’s attention is not on the surface details, but instead on the movement itself,” Kahrama continued. While the typical flailing and crumpling ensues, it’s really the way that Mr. Dismount clings to his various vehicles that inspires empathy. As the car speeds up, he grips onto the rear bumper for dear life—a life that’s about to get real messy in about 3 seconds.

it’s the way that Mr. Dismount clings to his various vehicles that inspires empathy

While Turbo Dismount deals in its fair share of high-impact, can’t-look-away collisions, it holds back on the blood and guts. As a result, the game doesn’t feel like it’s trying to be visually shocking. You’re not torturing Mr. Dismount, you’re just making the arrangements for all sorts of unfortunate situations that may or may not occur (they will). Kahrama believes that letting the sound design handle the gross bone-crunching moments evokes “a stronger emotional response than full-on graphic violence.” (“Full-on graphic violence” being a relative term here.)

Oddly enough, it’s the comic timing in Turbo Dismount that accounts for a large portion of the game’s humor, which is notable because ragdoll physics, by its nature, is unpredictable, and the game’s pacing is largely dictated by the player, not Kahrama and company. It’s like you have a script for Jackass: The Movie, but it’s up to you to instigate and direct all of the stunts. Slumping Mr. Dismount over a tricycle’s handlebars and starting him at 2 mph toward a busy intersection is as much a part of the gag as the eventual crash. With instant replays you can position the camera and alter the playback speed to your heart’s content, looking for that perfect angle to witness the removal of Mr. Dismount’s torso from his lower half.

The science experiment nature of Turbo Dismount’s trial and error tinkering and controlled crash test environments gives the game a simulator feel, albeit one that’s significantly warped from whatever upstanding research from which it would have stemmed. “Simulators are usually considered the most grim and serious end of the gaming spectrum,” Kahrama mused. “So yes, perhaps our coining of Dismount games as the premier personal impact simulators has a bit of contradictory flavor.”

And ragdoll physics is at the crux of that sarcastic delivery. Sure, Turbo Dismount is slapstick to a T, but there’s a deadpanned-ness to its physical comedy as well. Mr. Dismount has no face; he’s the shape of an empathetic human form, but infinitely disposable and respawnable. Ragdoll physics illustrate the fakeness of their own “realness.” Turbo Dismount is a simulation. But of course it isn’t —that’s the joke.