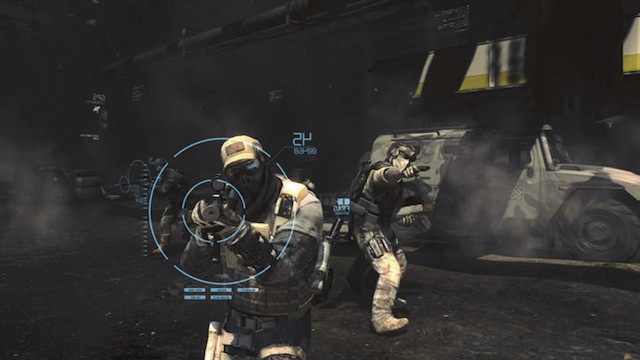 My interview with members of Red Storm Entertainment, the development team behind the upcoming tactical shooter Tom Clancy: Ghost Recon, made a distinct impression: These guys could kill me if they wanted to.

Of course, they wouldn’t want to. They are very nice guys. But let’s just say I feel confident that they could pull off many of the special operations performed in their games. They train with military specialists. They are just as familiar with firearms as control pads, enabling them to bring a legitimate wartime experience to the living room. Yet the influence goes both ways. While Ghost Recon is deeply entrenched in the realities of war, videogames are also pushing the boundaries on the battlefield, as soldiers come to expect combat to be more like playing games.

What gives the series the extra oomph in terms of fidelity?

Travis Getz (Authenticity Coordinator): We have an added advantage in that we are based out of North Carolina. A lot of the California studios can’t really have firearms. Here, we have people who shoot for fun. We have four or five guys whose weapon collections easily go into double digits.

Michael Climer: (Weapons Artist): I’ve probably got the most expensive collection of the people around this table. At last count, it was 13 or 14 [guns] in my personal collection.

Is it a competitive hobby?

Michael: I’m more interested in long-range rifles, so I shoot in thousand yard competitions. Most people are into assault rifles. Every now and then, we do the occasional team-building exercise with airsoft or paintball. We went up against another local studio in a paintball competition. That was pretty fun. We cleaned the floor with them. [Laughs.]

How much time do you spend at the shooting range?

Tommy Jacob (Multiplayer Creative Director): We invest a lot in understanding how guns work. We have regular trips to the firing range. That’s pretty common. We get to fire some pretty impressive weapons–not necessarily legal to own, but legal to train on. We carry that over to making good gameplay decisions.

Travis: Case in point: Trey, one of our weapon designers, had been shooting, but not shooting full-auto. So we met up with one of our advisors at his facility, and he got to fire several fully automatic weapons.

Does hands-on experience with the weapons help?

Tray Epperly (Weapons Designer): I was skeptical about it. “I’ve fired rifles before. I know what’s going on.” But then to actually feel the difference between types of weapons showed me how unique they can be.

Tommy: It goes beyond the feeling. It’s the dirt kicking off the ground. The movement of leaves nearby. You might not be able to get in all in, but at least you know it’s there. Authenticity lies in finding out what’s real and distorting that to make a great game. Realistic is a tricky word. In reality, I could get shot in the leg with a 22, and “Game Over.” We wouldn’t categorize ourselves as realistic, but we strive for authenticity.

Let’s say someone is an expert at playing Ghost Recon. How close are they to being a good soldier in real life?

Tommy: What a game teaches you about guns is very different from reality. Even being in a firing range, and knowing that the thing in your hand can destroy something, gives you a completely different sensation than holding a controller. It doesn’t prepare you at all for being engaged in a military exercise.

Travis: Even with our Gunsmith feature, where the player is customizing weapons, he isn’t really learning how. The weapons come apart by themselves. It might bring people to an understanding like, “Oh, there are these different parts.” But in no way is it training.

A player in a videogame wants to be alive at the end. The goal of a soldier is no different.

Michael: We don’t have the gun jam on you. We never have the magazine fall out. We never have any sort of breakage. Every reload is perfect. Even in classes, when you are shooting at a target that doesn’t move, and you have someone yelling into your ear, those things can happen. The adrenaline level is a lot higher.

You have quadrotor drones in the game. I’ve flown one of those before, and it is exactly like playing a videogame. You have to admit, there is a stylized analogy going on.

Tray: Ideally, if you come into our game and you fire an AK-47, and you go out in the real world and fire it, you can see where it comes from.

Travis: The game can improve your familiarity with things. A long time ago, after Rainbow Six had come out, we got an email from a young marine who said his unit had just adopted the NP5. His sergeant asked if anyone knew anything about it. And he rattled off, “It has this many rounds in the magazine, it is a gas operated submachine gun, and blah, blah, blah.” He knew because he played the game.

Is the technology consistent with that which is in use on the battlefield today?

Travis: The games are set in the near future, so they aren’t realistic by today’s standards. But they are inspired by current day sciences. Augmented reality is a good example. Right now, there isn’t a lot of augmented reality on the battlefield, but it is a great assist to the player to know where enemies are.

That makes me think that game design is leading combat in some ways.

Travis: We have actually seen examples. Land Warrior is a technology that will show up on a map and tell you: “the good guys are here.” Knowing where your friendlies are is very important. You don’t want to kill them by accident. Soldiers who were deployed with the Land Warrior system were unhappy that it took two minutes for the satellite link to update. The reason: they had been playing Ghost Recon, where it updates automatically. In a way, yes, [videogames] are driving people’s expectations about what should be going on with military technology. I know from experience that a lot of military development installations are looking to games about where to go next.

Are there any other aspects in the game like this? I suppose the x-ray scope doesn’t exist yet.

Tommy: X-ray technology exists, but not with the fidelity we’ve handed to the player. Those are liberties we’ve taken.

Travis: We can postulate that something like it could exist in the future. The way that our x-ray works is that it sends out a signal, which measures the surrounding metallic resonance of weapons. From that data, algorithms fill in the gaps to create images of bombs, land mines, whatever. That’s the fiction we’ve created. But from what we’ve seen, it’s not out of the realm of possibility.

Tommy: There is portable x-ray technology. It’s just doesn’t have the accessibility that we provide. It requires that you take the device and put it flush up against a surface.

Are there any other examples?

Tommy: We have a concept called the data hack. The idea is that the two warring factions are tied into systems, allowing headquarters to track their position on the field. In our fiction, you are able to hack into the other team’s system, download their data, and transmit that data to your team. Your team will know the position of every enemy.

Tray: One of the real-world analogues happened a few years ago, when the Iranians brought down a US drone by hacking one of the radio frequencies.

If the government called and said, “We’d like the Ghost Recon team to come work for us,” would you do it?

Travis: Yes. I don’t know that they would look to a game developer to help prove a theory, but it’s certainly a good place to look to inspire ideas. The goals are the same. A player in a videogame wants to be alive at the end. The goal of a soldier is no different.