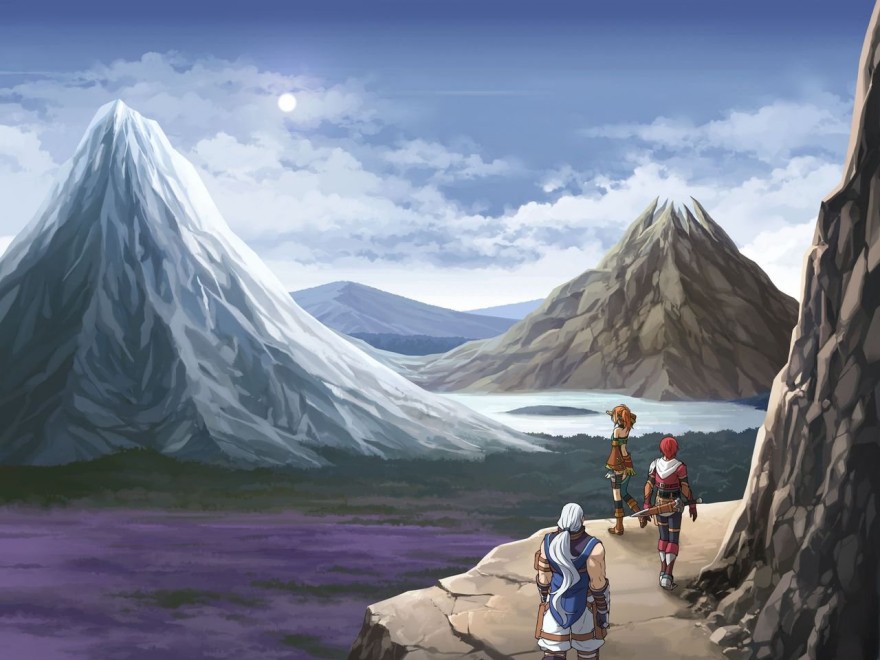 Memories of Celceta is a dream about books. Like fellow game of letters Soul Sacrifice, it calls up an object of leather and vellum to replace the metal and glass frame in your hands. The menus of Soul Sacrifice are flipping parchment used in the world’s greatest cram session: the player is a prisoner tearing through his captor’s journal, on a literary hellride that teaches the nature of both magic and evil. Celceta’s book-lust is less desperate. It’s a game of mapping and indexing, keyed to the image of a library that contains every story, including Memories of Celceta.

Like 2010’s Ys: The Oath in Felghana, Celceta starts with an editor’s introduction, telling you that the book you’re reading is one of the hundred volumes of travelogue written by adventurer Adol Christin. Like Adol himself, the prose is so devoid of character that readers project themselves right onto it. (“Allow yourself to become immersed within his words…imagine you were he,” the Felghana guy says, milking it.) The pages of Soul Sacrifice were smeared with blood and ink, but there’s not so much as a coffee ring on Celceta. Its characters are drawn bright and its ideas expressed cleanly, in the “simple, honest” style of Adol’s thought.

The game taps into the comforts of great archives, thick rolls of maps, inexhaustible bodies of knowledge. The overflowing tomes and scrolls in the god Eldeel’s library, a key location in the game, describe all possible inventions. At the end of the story, you travel inside a written record that spans all of history and controls the fate of the world (it looks like a slower build of the Matrix). Adol’s 100 books might as well stretch to infinity: the story of his life seems too long to read in ours. There have been seven numbered Ys titles, and he’s barely reached drinking age.

Few games have been more proud to belong to a series that seems to go on forever. The editor notes that this volume is significant for being the first in which Adol refers to himself as an “adventurer,” a fine point that can only be appreciated by devoted readers of books that do not exist.

A very long series can be more charming on paper than on screen. Most readers of The Way Some People Die will be glad to find shelves of unbroken Lew Archer paperbacks waiting, but the new player of Final Fantasy XII will be less eager to jump back to FFII. But the modern Ys games capture the welcoming unity of tone some authors develop: what you like in Celceta, you’ll probably find in Ark of Napishtim, Felghana, and Ys VII as well. They’re one-off adventures that never work the continuity pedal too hard. Like Archer or Flashman or Tintin, Adol is a character built for the long haul, the type you can rely on to get into certain kinds of scrapes and come out in one piece.

Unlike them, Adol adds little of himself to the situation; conflicts just develop and resolve themselves around him. He feels less like a character than the moving cursor of the author, pushing forward to create the world. Even in Ys I, his best quality was his walking speed, which always seemed a step faster than Link’s. That pace is the main pleasure of every Ys game. In Celceta, characters forge ahead at breakneck speed, rolling forward in clean snapping motions. Adol seems to practice the technique discussed in old Shaw Brothers subtitles, which turned jumping into “body lifting.” He rises and then bursts ahead, like a man equipped with VTOL thrusters.

As long as Celceta keeps moving, it’s golden. Players come back to the Ys series for the action, which is fast and bloodless, ending in a shower of jingling trinkets. Adol’s charging attacks shove stuttering enemies backward, and his dodges and blocks create space to begin another push. For a while, clearing a path through the forest of Celceta is the most frictionless grind since Xenoblade Chronicles. But you can’t get lost in the landscape, as players did in that game; here you skate over a surface that doesn’t bear much looking at.

You can barely take a step without entering a circle of bland camaraderie, where each of your friends sounds the one note of their personality.

When the easy flow of combat is interrupted, Celceta’s charm drains away. Arriving at any new town stops you dead. More than once, you’re made to talk to every person in the place before you move on. It feels suspiciously like visiting rather than exploring. And as the game continues, a terrible accretion of chums slows the pace to a crawl. You can barely take a step without entering a circle of bland camaraderie, where each of your friends sounds the one note of their personality as prologue to every new area or event.

Early on, the game’s lack of character is almost reassuring; the editor even frames it as an asset. But creeping blandness eventually rots the whole project. It keeps laying on more mealy dialogue and faint shows of local color, as if enough blue text windows would simply bury any powers of judgment players have. It feels like it’s imitating something it doesn’t quite understand, reproducing the form of a story without supplying the sense.

Celceta’s particular love of libraries only suggests an interest in buying books by the shelf. It treasures the idea of a long series, but doesn’t especially care what that series is saying, or whether there are even any words printed beneath the handsome red covers. It feels like it’s copying rather than developing ideas from other Ys games. Its familiarity is comforting only during the fluid action sequences, when Adol still looks light on his feet; even then, it feels like he might be rushing toward a dead end.