Investigating the experience of scent

Working at the intersection of perfumery, olfaction technology, and art ambassadorship, Saskia Wilson-Brown is the founder and executive director of the Institute of Art and Olfaction in Los Angeles. At once expanding the independent perfume industry and opening its traditionally guarded practices up to the public, Wilson-Brown’s work embodies a spirit of accessibility and experimentation. Since the IAO’s inception in 2012, she has launched the Art and Olfaction Awards; produced and co-curated the Experimental Scent Summit; created a dynamic selection of scent-focused courses; and been featured in the documentary film Language of Aroma.

We spoke with Saskia about what access looks like in the perfume industry, the role our sense of smell plays in our survival, her experience in the film industry, and what it’s like to work in a medium known for its intangibility and ephemerality. 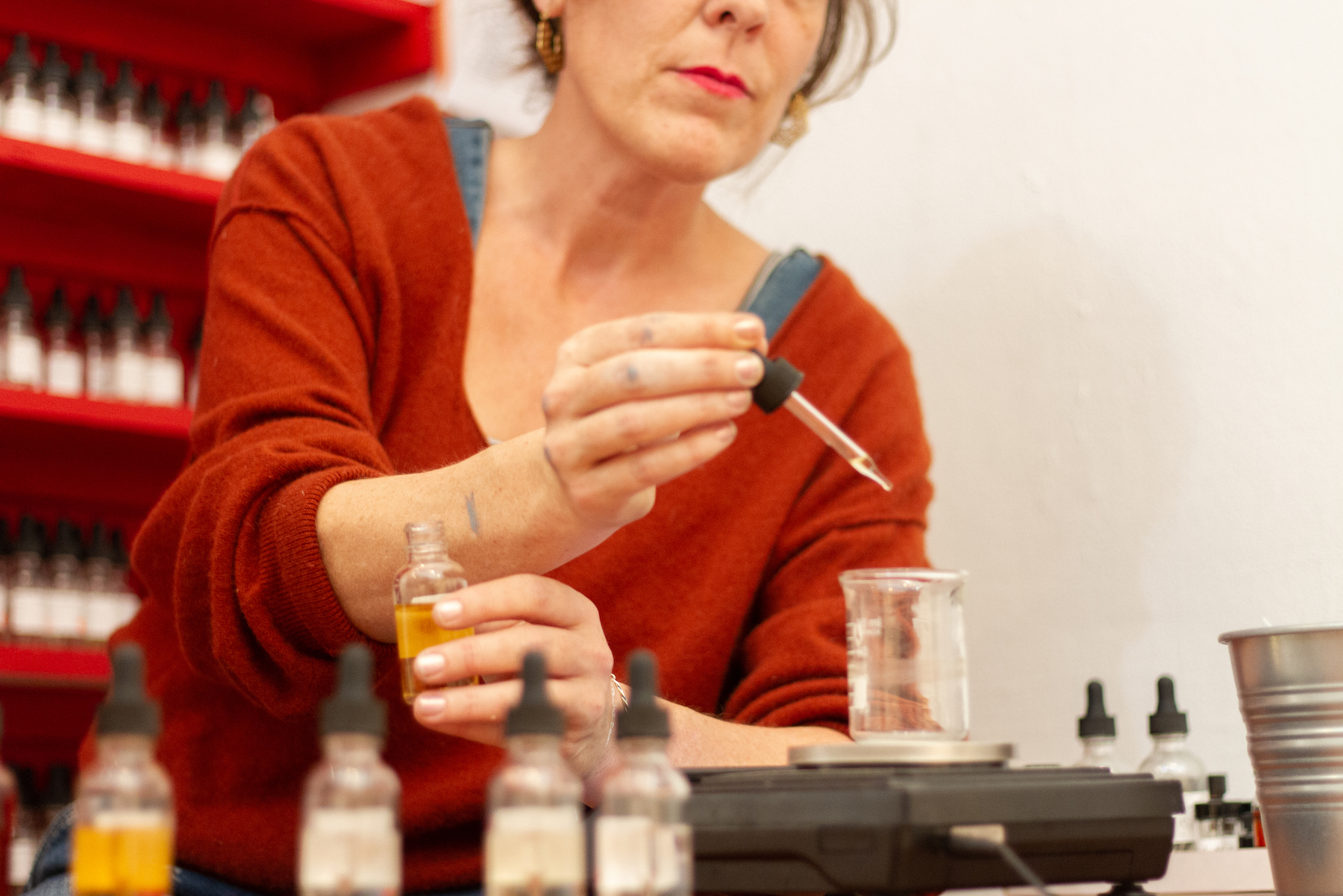 Saskia at the Institute of Art and Olfaction (IAO).

Could you tell me a little bit about your own personal background? I know it’s extended far beyond your work here, with film and everything.

Well, I got a Master’s in art, and then I was in London doing art for a while and then I came back to LA and I got a job. I was broke, so I got a job doing production design assistance, like, assistant assistant—shoveling props and doing laundry. I was doing that for a while, in art departments, and then from there, I started working for this film festival here in LA. And then I started working at this TV network, and I found myself in TV. Film kind of wasn’t my thing, but I became really interested in independent practices in TV and film, film specifically. It was right at the time YouTube launched, so it was an interesting time in film and TV.

For a bunch of years, I worked at a TV network, but then it got bought by Al Jazeera. And previous to that, everyone had gotten laid off, including me. But they gave me a severance, and that gave me a nice little time to start thinking about, “Well, what did I find interesting about film and TV?” And it was really that independent practice. I’m interested in subverting dominant paradigms, wherever I see them. And at the same time, my buddy had given me a book about perfume. I put two and two together, and I thought, “maybe I’m a little burnt out on the film and TV industries or whatever, but here’s another industry that is years behind even film and TV, in terms of creating space for different voices and information sharing.” Because YouTube had changed everything in media, but the perfume industry was really, it still is, very much a top down, corporate industry.

So I became interested in perfume, in that capacity. Like, “Okay, well, what is this industry that has no space for outsiders? And how can I make space for outsiders, in it?” And that’s what inspired me to start this place. So, kind of wide-ranging. 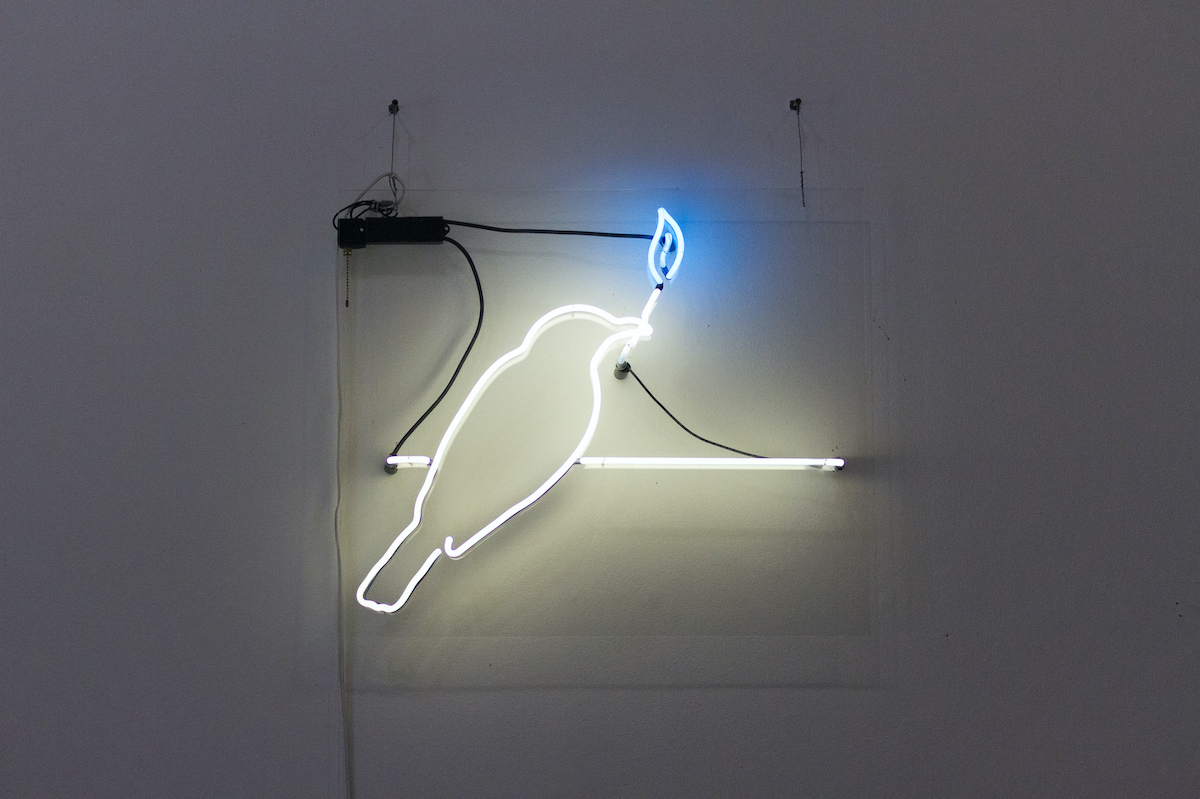 I know it might be a broad question, but could you talk about how perfume, scent, and aroma are important to you?

It doesn’t sound very nice, but I think smelling, like any other sense, is important. Smelling, back in the caveman days, was possibly more tied to our perception of our environment and to our survival. I don’t know if there’re facts to back that up, but there’s this basic purpose to smelling. Which is, “Okay, this meat is rotten, I’m not going to eat it.”

There are things like that, that smelling really services. I think as humanity has developed and de-natured itself, like gotten itself less and less in touch with the natural world, the sense of smell has become more of a tertiary value to us. And I mean, this is supported by philosophers. I think it was Plato, somebody, who said that scent was the lowest order of the senses.

But that belief about scent has really carried us through the years. And what I think is important about scent, in particular of the senses, is that it really requires you to be there. You have to be in the place to experience it. You can’t digitize it. It’s the antidote to the world we’re living in, of all this constant stream of information. And that actually was the first thing that really drew me to it, when discovered it. One, there was the political angle of like, “Why is there no access?” 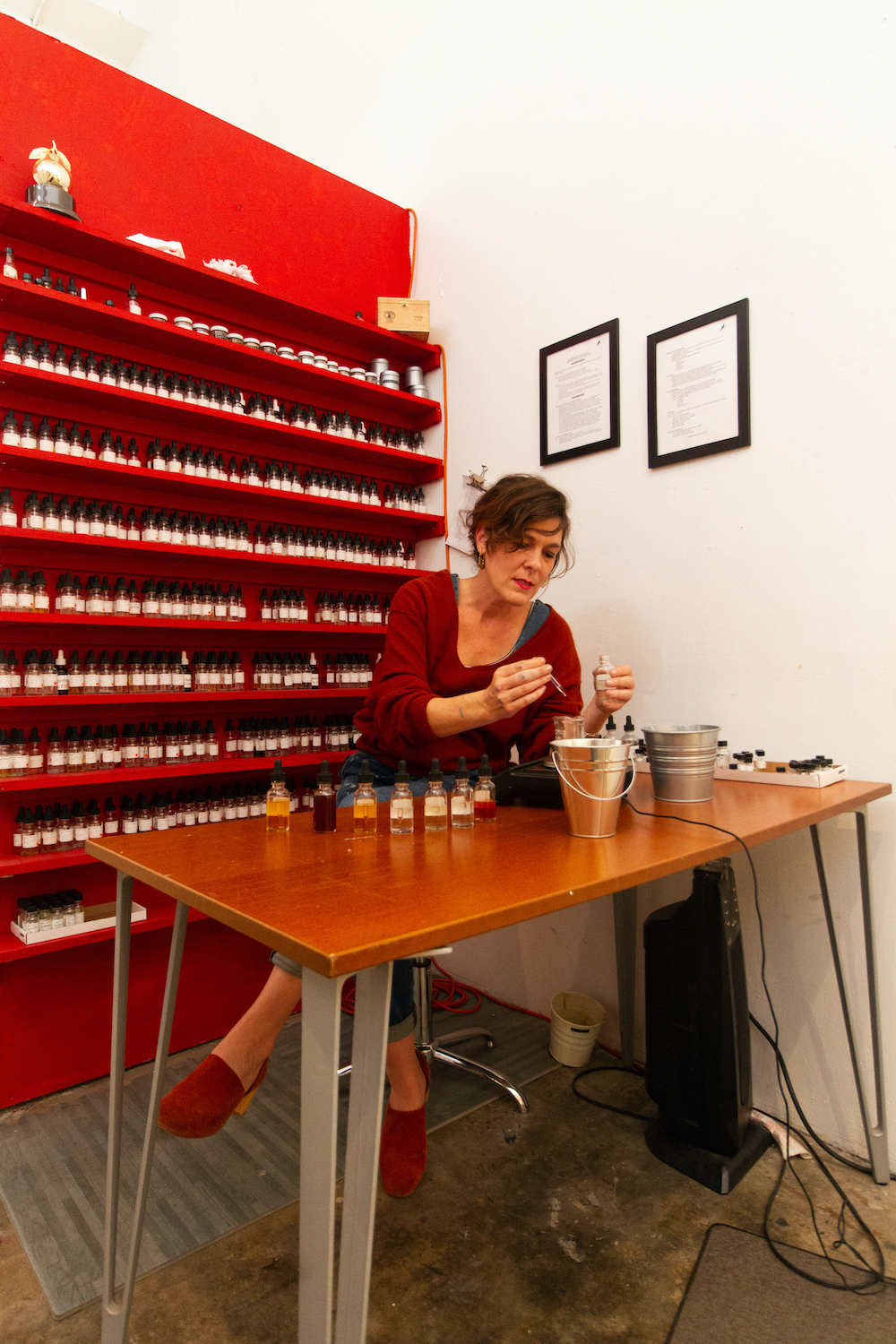 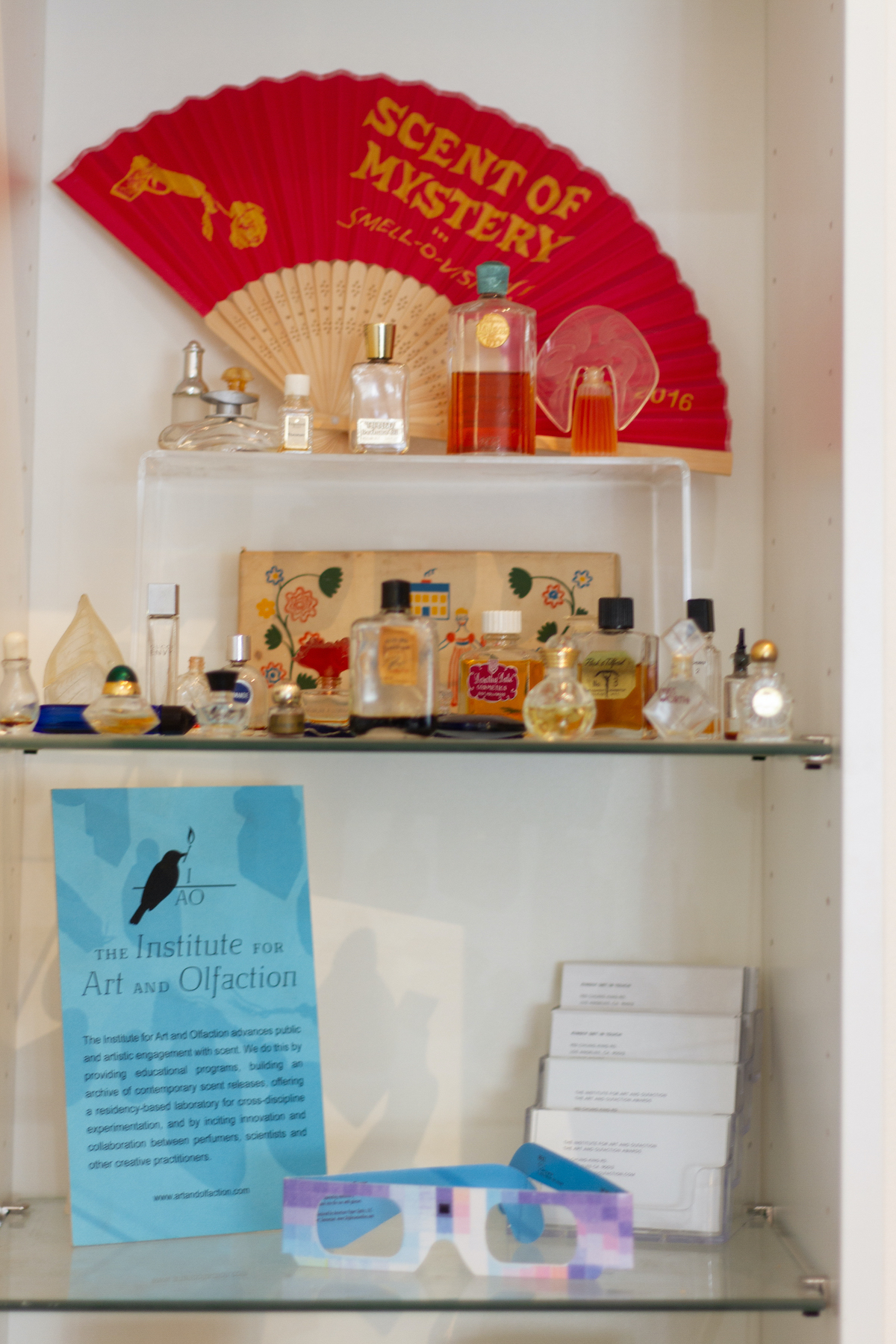 “You have to be in the place to experience scene.

You can’t digitize it.”

But also there was just the pure exhaustion of being human in the world, right then, where I was, especially working at a TV network, just constantly processing media and these digital files in this really disembodied sort of life. And smelling was like, “Okay, you have to be there. You have to take a minute. You have to think about it.” When you’re consciously smelling, it’s almost like meditation.

And that’s what I think smelling brings to people, or focusing on smelling, this, “Okay, let’s take a moment and think about what we’re smelling. Let’s be here. Let’s try to use words.” It’s very hard. “Let’s try to use words to communicate what we’re experiencing.” It’s extremely challenging, but it’s a good mental exercise and it really makes you be, you know?

Most of the work we do is really based on this idea that we need to create access to the materials, in order for people to enjoy their right, if art is a human right, you know, and if perfumery is, or working with scent is an art, which many people claim it is. Then it would follow that we have a right to work with scent, and to work with its materials. It’s sort of like telling people they can’t make paintings because the paint is owned by people who don’t offer access. “Too bad.” That’s sort of how it was. 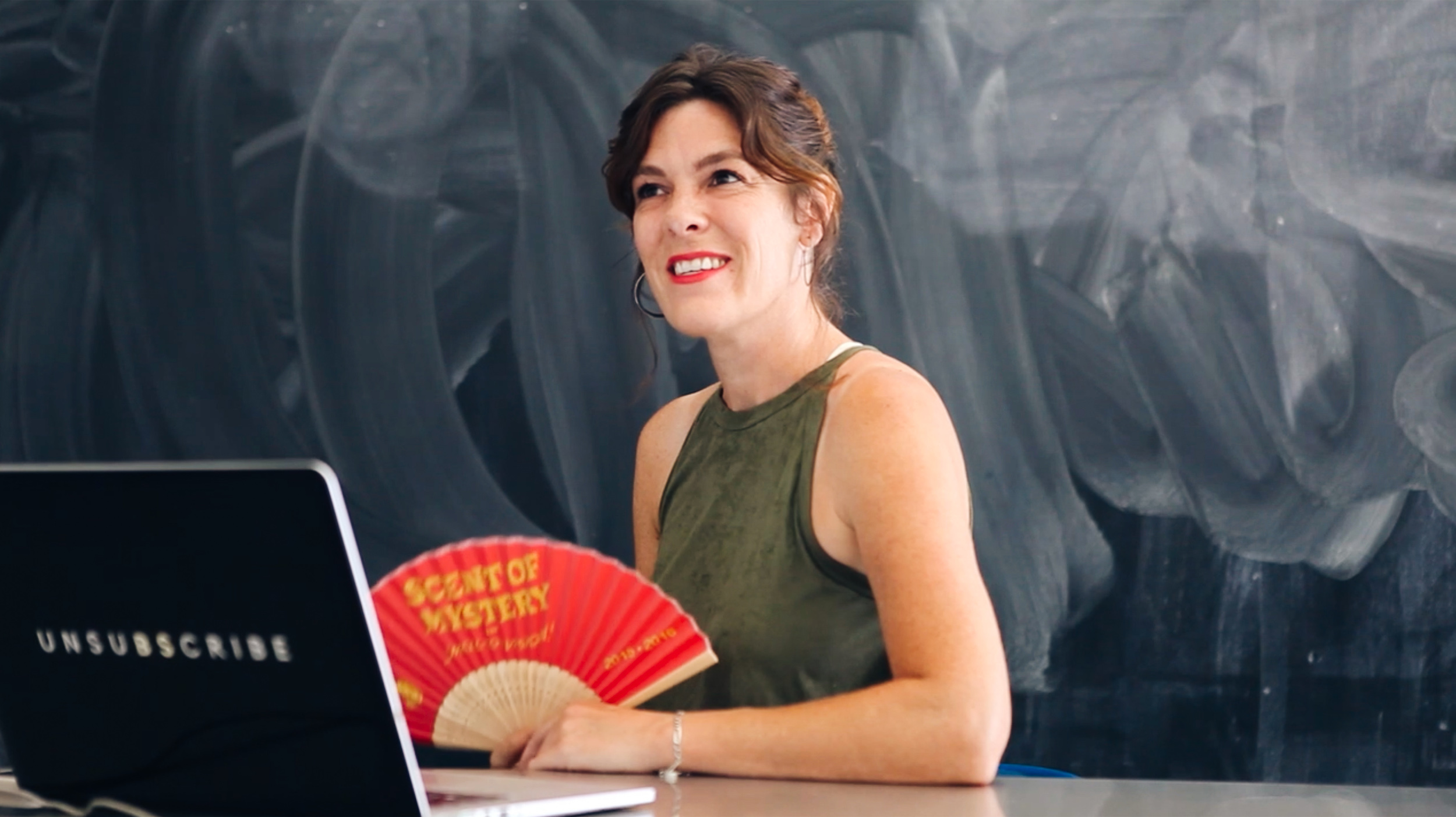 No, it definitely answers my question. And I think that, often it seems as though scent goes unacknowledged, or maybe un-investigated in a lot of different artistic media, whether it be music or film or even more locational ones, like theater or performance.

Exactly. I’m wondering, what would you say to an artist who maybe hasn’t considered the relationship between scent and what they do?

I would say you’re missing out on a very powerful way of communicating with your audience, and a way that is almost so subtle that sometimes they won’t even notice. So I mean scent can be obvious. You could be like, “Let’s bombard people with the smell of skunk.” Okay, that’s a very great way of communicating something, to somebody, and as an artist that can be a really empowering tool to use in your practice. Because it’s just another way of communicating, you know? 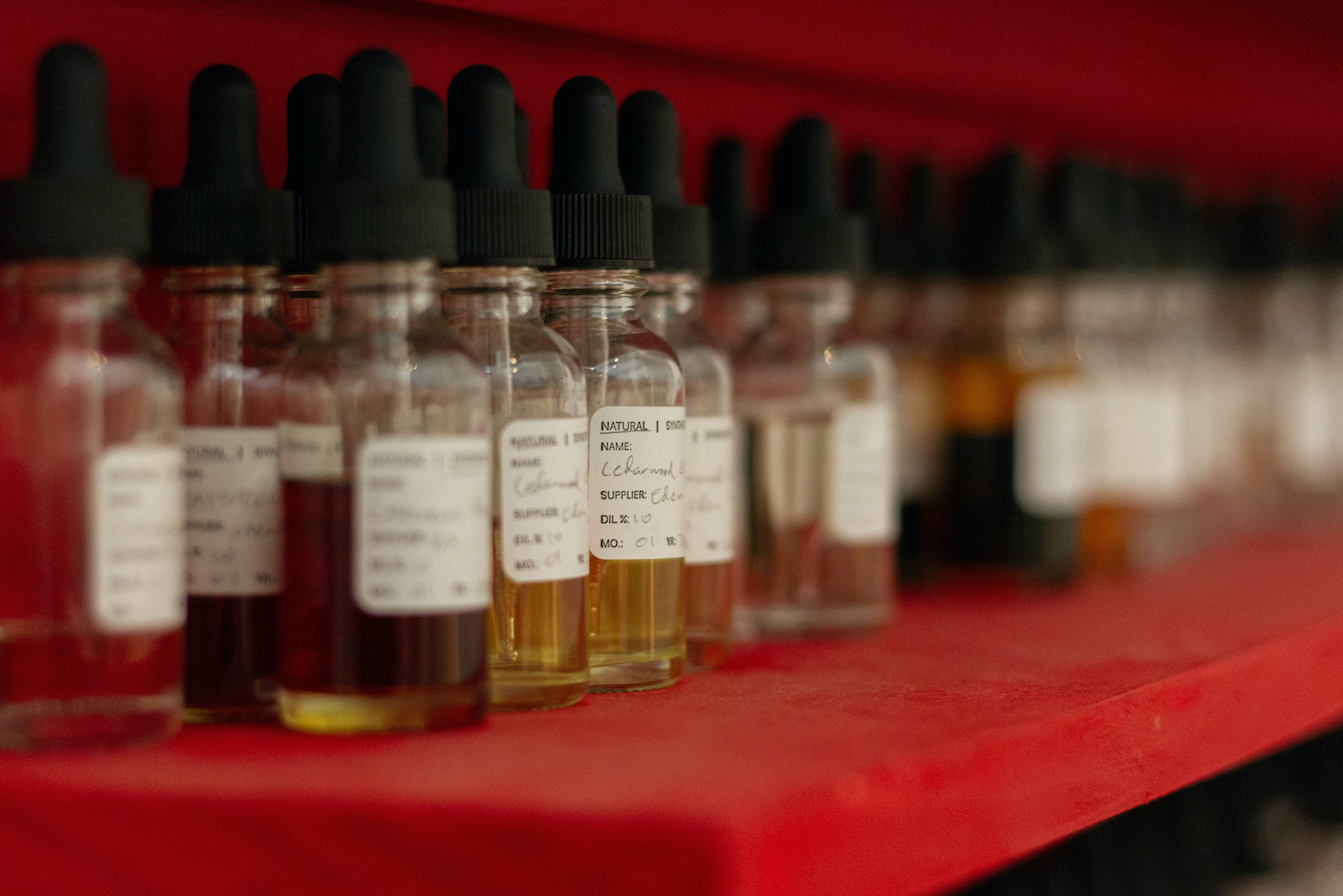 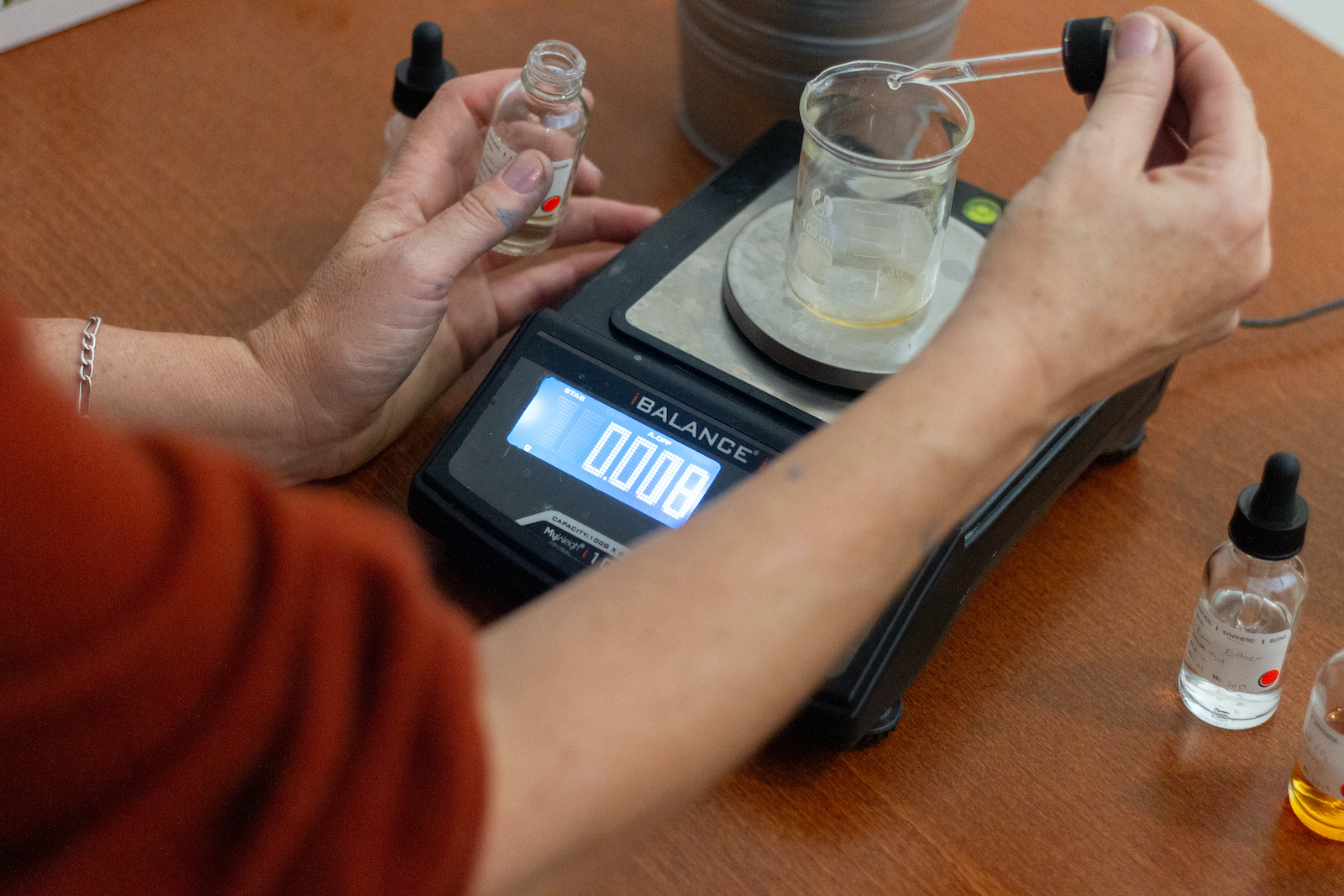 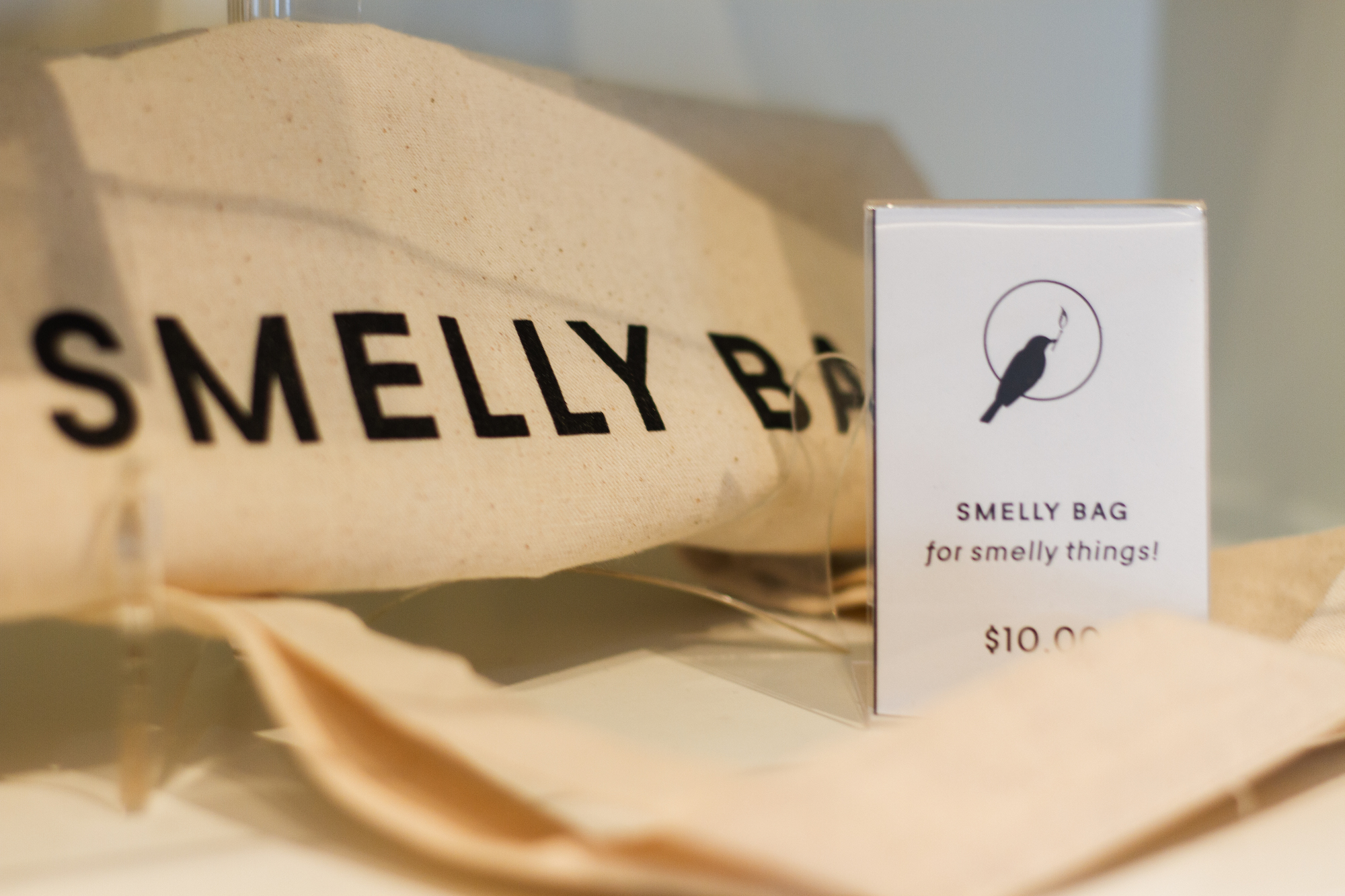 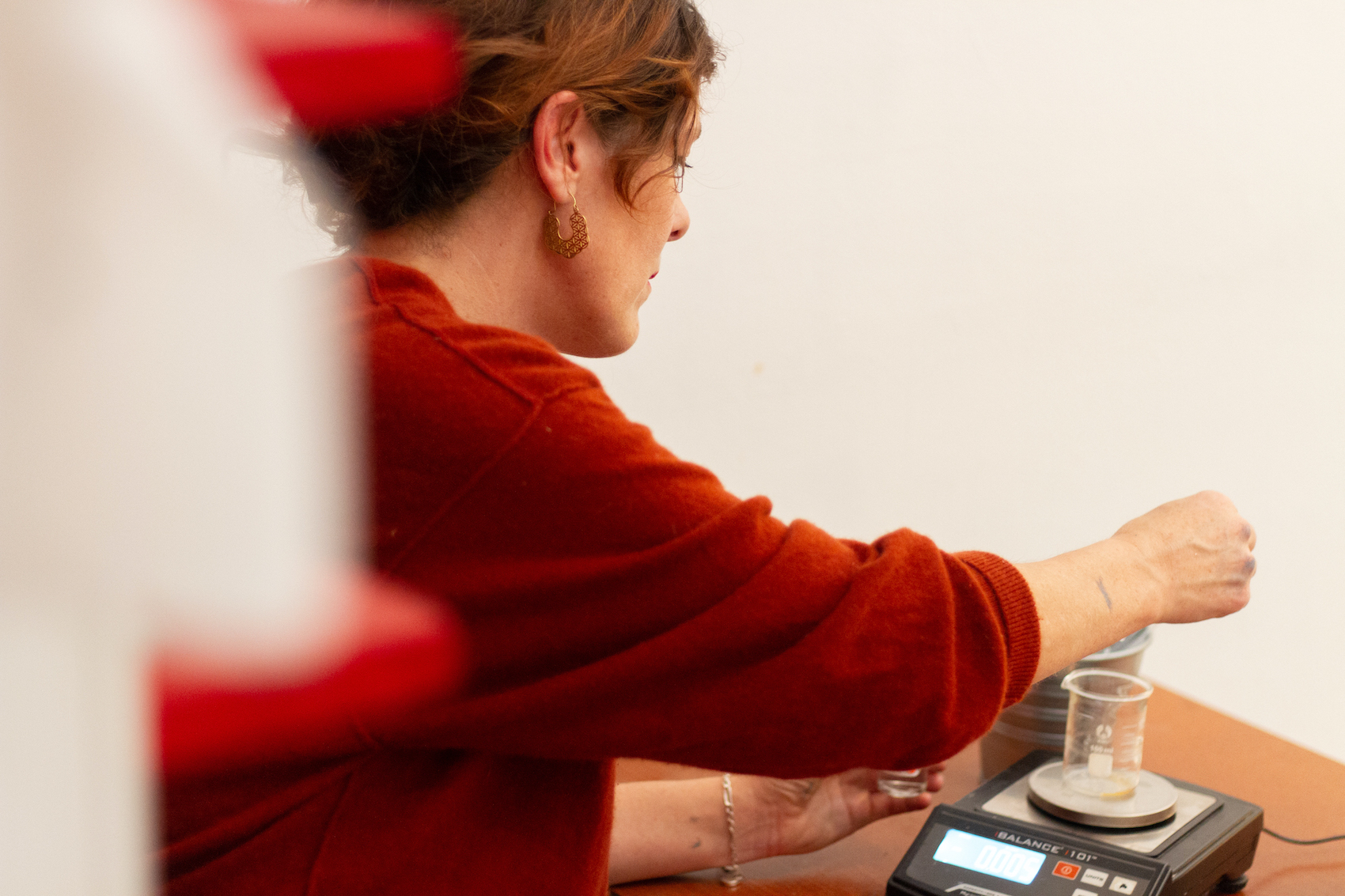 But also you can do really cool things with scent, because it’s so hard for people to place and verbalize scent. Oftentimes people don’t even really investigate, as you said, but that’s exactly the word. They don’t investigate their experience of smelling. And this is an example I give often, and it’s a pretty obvious example. Let’s say you’re doing an installation in some Italian palace, or something. And you’re surrounded by luxury and it’s a very luxurious space. And you’re doing an installation about luxury, or whatever. You could easily, very subtly, pump in a jarring smell or something that doesn’t compute as a luxury. And that would kind of subvert people’s experiences in a way that you wanted. Because it could make people a little ill at ease. And maybe, as an artist, that’s what you want. Or, conversely, if you’re doing an installation that’s really difficult for people to experience, you could add a little element of calm or pleasure by inserting a smell that most people like.

So there are just things you can do with smell, and it comes down to communication. So for artists to use smell, it just gives them another tool, another medium in their arsenal of mediums. And why not? But people haven’t used it, I think, because up until fairly recently, it’s just been inaccessible. People didn’t know they could. And that’s changing a bit. 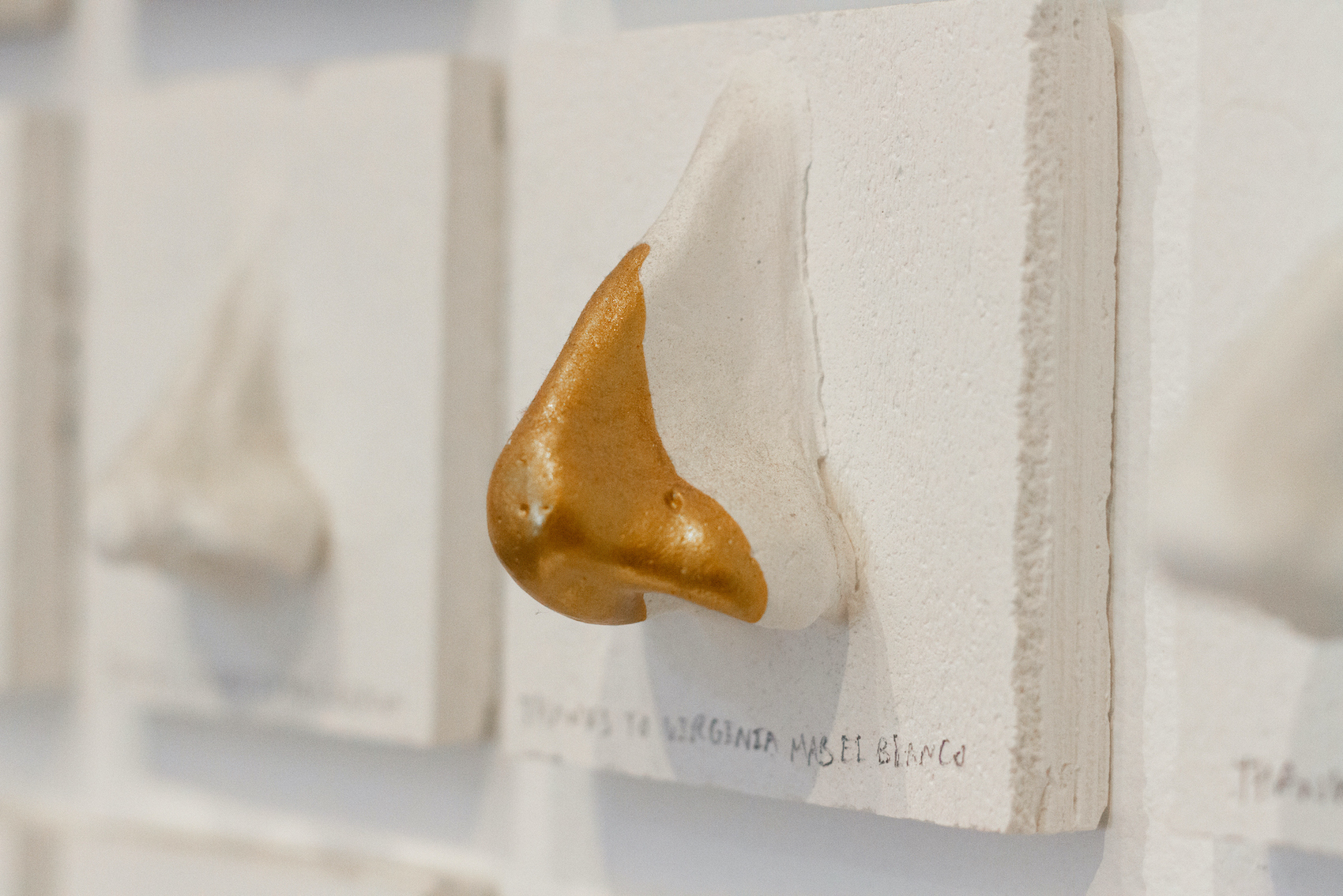 Institute of Art and Olfaction

Language of Aroma, a documentary on scent