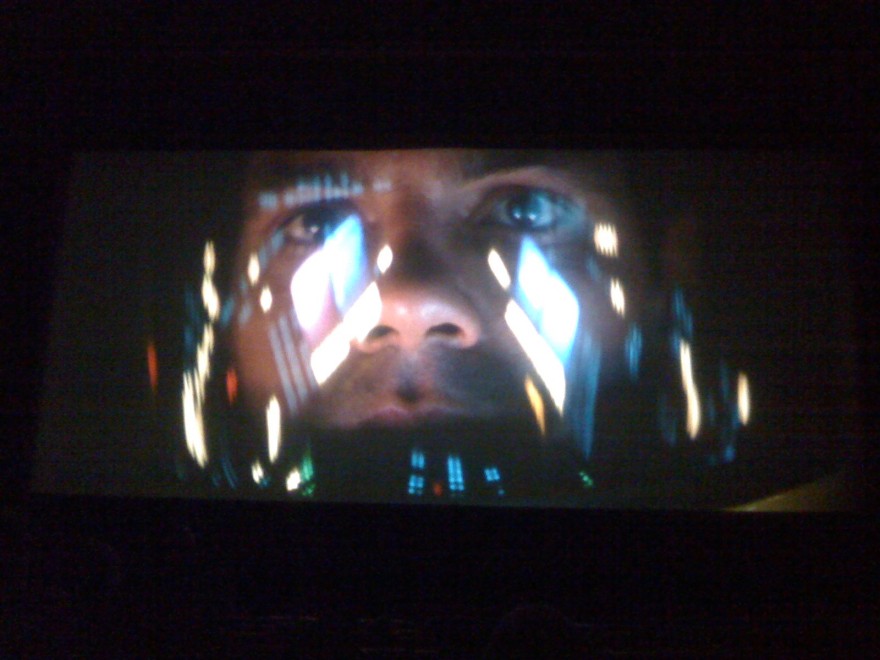 At a recent screening of 2001: A Space Odyssey I noticed something I’ve never noticed in my dozen or so other viewings of the film, doctors Poole and Bowman watch their BBC interview on what might easily be described as iPads. During the intermission, a fellow viewer mentioned this out loud to me as well and we enthusiastically commiserated over the idea that Arthur C. Clarke and Stanley Kubrick had invented the iPad in 1968. However, though there is debate as to exactly what 2001 is about, it is certainly not about the invention of the iPad.

To my recollection they only appear in one scene and now, in 2014, may even be a bit mundane or perceivable to viewers as opposed to a shocking extension of mobility and telecommunication to 60s viewers. Had Clarke and Kubrick imagined the possibilities entangled with such a device? Had they thought and planned for the societal and cultural changes that would come along with the other various inventions that casually appear and never mentioned again or further explored? It was Clarke who famous quipped that quipped that “Any sufficiently advanced technology is indistinguishable from magic.”

These details are what concern Adrian Hon, CEO of Six to Start and creator of Zombies, Run! In his new book, A History of the Future in 100 Objects, Hon explores the past of our future gradually, simultaneously advancing current technologies to occasionally nightmarish ends and questioning the directions of such advancements. He is not interested in the grand mysticism of 2001, instead, he has worked to craft a history via deduction, taking a “hundred snapshots across a century, each one examining a single object from a single time in detail. Who made it, where it came from, what it means, and how it transforms the world.”

Hon’s objects also change the landscape of futurism by constructing what might be thought of as a time capsule encyclopedia of our future told as our past. There’s the bright yellow UCS Deliverbot  in 2021, the Sudan-Shanghai Connection built in 2025 to satiate China’s growing appetite 2066’s Neuroethicist Identity Exam for the Sol System designed to “communicate the options available for identity manipulation to other humans in a clear and empathetic way.”

In this approach to the days to come, A History of the Future in 100 Objects might be considered the opposite of Edward Bellamy’s 1888 science fiction and political novel Looking Backward: 2000-1887. Instead of a Rip van Winkle-esque character being awoken in the future and having secondary characters narrate the past, Hon explores each object as though it were a museum piece and attempts to demonstrate the ramifications that each such object would have on human life.

Hon feels that “only by taking a snapshot in time and comparing it with the past that we can see quite how the world changes” and in doing so not only creates one future but 100 futures, each informed by their own canonical past and our present one.

You can read many of the chapters of Hon’s book for free on the book’s site. Adrian Hon image via Garrett Coakley.