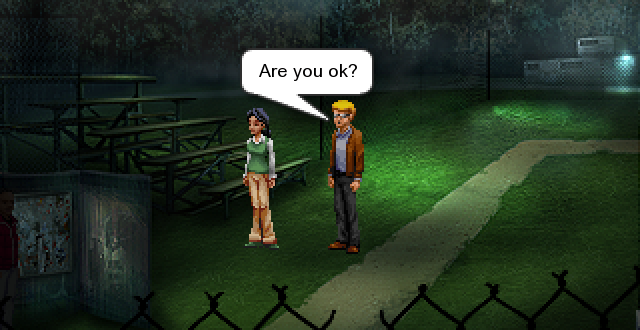 This past June all but erupted in discussions about women in games. At E3, from comments by Tomb Raider Executive Producer Ron Rosenberg about a potential rape scene in the upcoming game and the idea that players will want to “protect” the heroine, to the flurry of controversy over Hitman: Absolution’s provocative trailer, the show brought out the ugly side of the gaming industry in a big way. June also saw Anita Sarkeesian’s Kickstarter success for her video project—Tropes vs. Women in Videogames, and the subsequent vile backlash.

Amidst all of this, Resonance—a classic point-and-click adventure title developed by XIII Games—was released to critical acclaim and introduced the most progressive female videogame character to date. The game tasks players with leading its four main characters—a doctor, a cop, a journalist, and a scientist with intertwining backstories—through a near-future techno-thriller plot.

Conversations around the game haven’t much mentioned its female lead, Anna Castellanos, and just how radical she is. Anna reads like an antidote to all of the negativity surrounding female representations in gaming. She is the definition of a positive, complex, likable character—strong, with a difficult past, but the furthest from a “victim” stereotype one can be. She is a woman of color, and a medical doctor—an element reinforced by the gameplay, in which only Anna can access certain parts of a hospital setting, thanks to her credentials. She’s attractive, but by no means over-sexualized, and she holds her own in any number of difficult situations, including a scene where she evades an attacker in her own home. In many ways, she is exactly what feminist critics have been looking for in female characters.

“Anna was intended to be the emotional center of the story, and it always made sense for that center to be a woman,” says Vince Wesselman, the writer/designer and creative lead of Resonance. “I didn’t have any high-minded ideals or message behind the decision to make her a woman of color. It seems like ‘white heterosexual male’ is the default identity for main characters in games (and movies and television), and the only reason a writer diverges from that is if the story is specifically dealing with what it means to be of that particular gender or minority group. I just wanted to cast that notion aside.”

“I didn’t make these choices to make the game’s cast resemble the census results of an average American city, but would it have really been so wrong if I had?”

The concept of diversity—depicting characters outside of the “white, able-bodied, heterosexual male” “norm” in games—is still very new for many gamers that were raised on predominantly white macho heroes,  and the conversation surrounding it has often been fraught with tension. Game developers have repeatedly shied away from featuring women and people of color (and the double minority—women of color) out of fear of upsetting the status-quo expectations of the buying public and the possibility of backlash.

“I’ve seen a couple reviews or comments that suggested that I included Anna, as well as the ‘token’ black guy and old guy, in order to check boxes on some list. I didn’t make these choices to make the game’s cast resemble the census results of an average American city, but would it have really been so wrong if I had?

“I was worried, somewhat, about sounding stereotypical when writing the character of Anna because I was writing outside my comfort zone and knowledge base,” he continues. “But then again, in some ways, she’s my daughter. She’s an American but has roots in another country and culture, as my daughter does. She was either born in America or moved with her family to America at a very young age, as my daughter did. She grew up speaking two languages, but mostly took to the language spoken at school and on the playground, as my daughter did. She speaks English without an accent.”

The easiest place for the writing to have gotten bogged down—or for the story to have gone down an ugly, stereotypical path—would have been in Anna’s troubled past. Players actually take control of her as she navigates childhood nightmares, and flashbacks reveal both physical and verbal abuse in her history. But instead of ending up a “victim” stereotype, like Bonnie from Red Dead Redemption or the insinuations about the rebooted Lara Croft, or one of the countless female victims lining the great halls of videogame character history, Wesselman treats the character with respect and a realistic sense of strength. The designer credits his mother, a therapist who works with children who have experienced trauma, with his own desire to see a character rise up from that sort of past.

Kill Screen’s own Sarah Elmaleh voiced the character, and noted her own appreciation for Anna’s ability to overcome.

“She isn’t reduced to victimhood because she’s got lots going on,” says Elmaleh. “She’s a doctor, a professional. Without being full-on goofy, she does have a sense of humor. She’s comfortable expressing herself in this group of dudes. These things all point toward a persistent resilience in her.”

“It’s not the same as toughness, which is usually less fascinating to me,” she continues. “Anna feels things very deeply; she’s affected and even damaged by them, but she gets up and goes to work and flirts a little and moves forward. I think that’s compelling and realistic. Many of the people I admire most in life—men and women both—are strong not in spite of, but because of their comfort in vulnerability.”

So, what’s next after Resonance and its non-issue treatment of a realistic female character? The gaming landscape is slowly but surely starting to change, as evidenced by the sheer inclusion of more female leads in games of all sizes. Going back to E3 2012, for example, we saw the first playable female character in an Assassin’s Creed game, a lead based on Academy Award nominee Ellen Page in Beyond: Two Souls, and even a strong teenaged female character in The Last of Us (we’ll reserve judgment for Tomb Raider’s actual treatment of Lara Croft for a later date). Throughout the early 2010s, we saw the powerful ubiquity of fans who prefer a female hero in the blockbuster Mass Effect series—so much so that BioWare changed its marketing to reflect that fact.

“I have no idea how to educate the masses other than to wait until they grow up and experience life a bit,” says Wesselman. But he certainly does have a game plan: “The only thing that I can do as a creator is, again, think of my daughter and think of the kinds of games I’d like her to play someday and the women I’d like her to look up to.”

Elmaleh cites a number of recent articles. “We’re coming out of an era of stock female tropes, negative or idealized, that exist relative to stock tropes about men; that merely react to them. Resonance represents a really neat response to these questions as an indie adventure game,” she says. “Graphic adventure games have always had run of this broad possibility space with wildly varying settings, tones, and concerns.”

“Whether you could project yourself onto them was less important than simply wanting to understand and spend time with them.”

She points to 1998’s Grim Fandango as a perfect earlier example, with sassy, strong female characters and riotous situations.

“They can be set anywhere, about anyone—lady of color doctor! Fella of color journalist! Nerd scientist! Grizzled, tubby cop!—the gameplay consists of puzzles and conversations from the mundane to the fantastical.

“An underlying concern [in games] is that you won’t be able to seamlessly project yourself onto a protagonist and thus successfully engage with the game. With adventure games traditionally being in 2D, the protagonists faced out at you; they were known to break the fourth wall for direct address. They were independent-minded and sometimes outright mutinous, refusing to act out your more thoughtless or spiteful ideas. Whether you could project yourself onto them was less important than simply wanting to understand and spend time with them.”

Spending time with Anna was something of a revelation. As a female gamer who works in the racial and sexual justice nonprofit world, and someone who spends a great deal of time defending games to those who rightly look down upon them because of so many games’ overwhelmingly juvenile treatment of women (to say nothing of their treatment of people of color, or queer characters, alas, the list goes on), here was a character that spoke to me.

The secret, poises Elmaleh, is good writing, attention to detail, and a desire to see some honesty in every character.

“You don’t have to reinvent the wheel for your characters to be compelling and dignified,” she says. “Uncharted flanks Nate with a Girl Next Door and a Sultry Other Woman, and they are written, directed, and performed with such intelligence and subtlety that they’re lifted out of stereotype and into something lovely. And we’ve also been gifted with one of the all-time finest performances in a game, by a leading lady of many stripes and orientations, in a shooter—in this case, through simply obeying the [design] mantra of ‘Options and Choices.’ I think I might go spend some time with my second of three female Commander Shepards right now.”