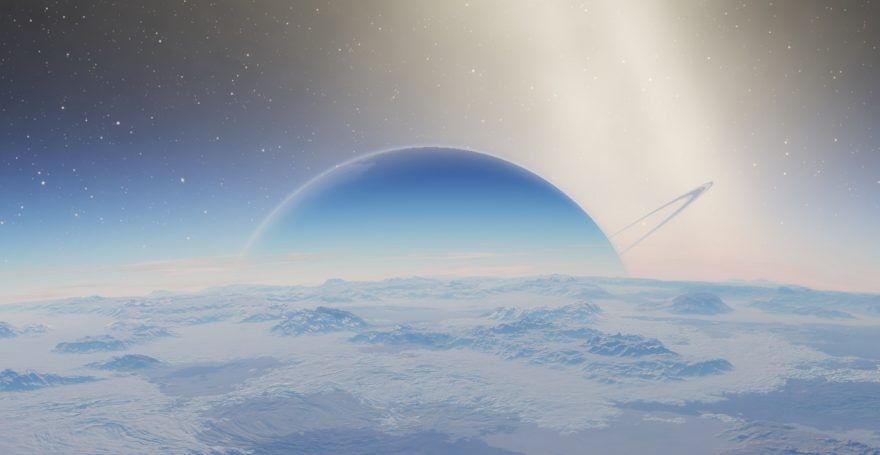 Given the mixed reaction to No Man’s Sky—we love it, others not so much—plus the fact that you have to lay down $60 on it in one go (not to mention the troubles with the PC version), perhaps you’re hesitant to buy in. Or, perhaps you’ve played it and have been disappointed by it. That’s fine. But there’s still probably some part of you looking to salve that itch for free-willed space exploration, to lumber across alien landscapes and discover sights that, in all likeliness, no one else will ever see. Well, that itch doesn’t need to go without a scratch.

While No Man’s Sky‘s ambition (and execution) may be somewhat unmatched by a lot of other games, it certainly doesn’t exist in a bubble. There are other studios and individuals who have ventured to create their own procedurally generated universes, eager to let players fly toothless into a void, or to scan planets for alien artifacts locked away by ancient mysteries. And perhaps the best thing? These other games are either free or will only set you back a few dollars. Yep, you can be a space nomad for no more than $9.99 if you so wish.

There’s a collection of 10 games that fit that criteria below. Each of them comes highly recommended and, between them, should manage to satisfy a lot of what No Man’s Sky is all about.

by Pol Clarissou and Nicholas Gavan

No Man’s Sky has been criticized for its repetitious activities. All the mining and crafting got some people fed up—not that the game asks you to stick with it. If you remove that aspect of the game, you get Even the Stars. Released in 2014, it’s described by its creators as “wandering through space without a purpose.”

You’re given a spaceship, and with it you can enter six-digit warp points in the hopes of finding ancient artifacts and bustling cities. As you have to enter these digits randomly, what you’re going to experience regularly is disappointment—only a star-punched void staring back at you. And when you do find something to explore your interaction is very limited, and so you’ll soon move on. When you run out of fuel, it’s all over, so make sure you spend time to contemplate existence while drifting through the light beams.

Mu Cartographer isn’t about space exploration. It’s a game of colorful landscapes, viewed from an alien machine that you gradually learn how to use through experimentation. The pinhole view that you’re given of the planets is your measure. By twirling knobs and pulling elastic triangles around, you learn have to not only move around and zoom, but to shift the contours of the topography.

The game is considered to be a treasure hunt of sorts, as there are items of interest to find, but it’s also a “sandbox toy” that lets you entertain yourself with the lurid, psychedelic mountainscapes and oceans for as long as you like. It’s No Man’s Sky played from a distance.

Noctis IV may be known to some given that it’s been around since 2000. As with Even the Stars, it’s a space exploration game that doesn’t give you structures to rely upon. To play this you’re going to have a thirst for exploration, especially as the original DOS version of the game has you peering through a 320×200 window into its dense, pixel world.

However, there is a little more to Noctis IV than Even the Stars: it’s much bigger and has within it a lot more variation. There are creatures and forests full of life to be found once you disembark and begin to wander some planets (tip: head for Class 00 stars). But, a lot of the time, you will probably be alone, surrounded only by striking horizons, space dust, and strange motionless architecture that bears down upon you. You do get to name the things you find, though, just like in No Man’s Sky. That should help with morale.

(Bonus: There’s a mod of Noctis IV that makes it a little easier to play, and gives you a bigger view.)

Yes, the title is a purposeful riff on No Man’s Sky. And the game itself is very much the same. Made for the LowResJam earlier this year, Norman’s Sky is a distillation of one of No Man’s Sky‘s biggest promises: the ability to fly to and land on any planet you see in its virtual universe. You can’t do much when you do land given that you’re tied to a cockpit view, i.e. inside a spaceship, for the entire game, but that’s besides the point. Norman’s Sky is a wish fulfillment. You want to zoom around space, hopping from planet to planet, right? Well, here you go.

MirrorMoon EP is a game led by shape, color, movement, and the synthesis between each. It’s a space adventure unlike most others. It starts you off on a red planet that you can walk the circumference of in a matter of seconds. While it is a game of some scale, it is less concerned with attaining magnitude through enormous space and more through its otherworldly mysteries.

The less said about it the better, as it’s an experience meant to be figured out; wordless, without instruction, allowing you to explore the cosmic functions of a handheld tool through intuition alone. Part of No Man’s Sky is learning to understand alien tongues—MirrorMoon EP parallels this, except its language comes not from a creature’s mouth, but the magical art of science.

An ongoing work, Space Engine is, perhaps, even more daring than No Man’s Sky. It, too, has procedurally generated galaxies with a vast number (the creator goes so far as saying “trillions”) of globes and stars. It, too, lets you land on distant planets and moons, as well as asteroids, from where you can watch landscapes cycle. And soon, it, too, will let players bring in their own textures and models for the engine to generate.

But it also contains an accurate simulator of our own solar system as well as the rest of the known universe, it all based on astronomical data, letting you fly out from Earth and out to the wilder reaches of space. It also doesn’t force upon you any of the survival game attributes that No Man’s Sky has, letting you freely explore, to admire light patterns and the continental swirls of planets, all without needing to refuel.

Played on a phone or tablet, Verreciel is an enigmatic space exploration game that takes place inside a Glass Ship. Initially, you’ll need to get used to how to work the Ship, connecting nodes and functions of the consoles that surround you. Once you get the knack for it, you’ll be able to move around its star systems, harvesting currencies and collecting warp keys to get to new locations.

Compared with other games in this list, it might be a bit too fiddly for some, its intricacies not quite friendly enough on first pass. But those who take the time to get acquainted will be rewarded with the subdued beauty of its geometric appropriation of space and its celestial bodies. The advantage of a Glass Ship is that you can see all around.

Before No Man’s Sky there was Elite. It’s the 1980s answer to No Man’s Sky. Imagine No Man’s Sky but made out of vector art. Elite was originally released back in 1985 for the BBC Micro and has since been ported to a bunch of other systems of around that time. Many would call it a classic, its vast universe being unprecedented at the time, and going on to influence open-world design in some of the biggest videogames ever made. No Man’s Sky is, of course, one of those.

The idea in Elite is to make a living by accumulating credits. You can do this a number of ways: piracy, trading, bounty hunting, mining asteroids, and completing missions for the military. With the currency, you can upgrade your ship so that it can travel to new galaxies, of which there are eight in total, with 256 procedurally generated planets to find across them. These numbers may be small in comparison to No Man’s Sky, but it can be considered the seed from which that game has grown from.

If it’s space combat you’re after then FTL: Faster Than Light has you covered. While you do get to explore its vision of space, it is limited, especially as you’re being chased by a huge rebel armada that wants you dead. You travel across sections of space in turns, choosing between different set paths in the hopes that the game’s random generation will give you a lucky break—perhaps a new technology, another crew member, anything to help you survive.

But it could just as likely be an enemy ship who you’ll then have to confront in heated battle. You can play in real-time or pause to better consider your moves. Either way, you’ll have to wait for reload times, to instruct your crew to put out fires, and move them around different rooms to attend to different functions of the ship. You will perish, many times, but FTL makes it easy to get right back in for another round of exchanging laser fire.

Similar to FTL, Out There focuses on survival during space travel, but it differs in that it isn’t concerned with combat. Instead, you’ll be whipping around a view of space that belongs to a 1960s sci-fi graphic novel, stopping off at planets and anomalies to mine for resources and find lost technology. Whereas FTL has you dealing with interspecies relations, Out There is more akin to No Man’s Sky in that it is about loneliness and carries with it an existential tone in its sharp writing.

The advantage of playing it over No Man’s Sky, too, is that it distills what is a similar experience, at least tonally, into something you can play in minutes rather than hours. The reason being that you’ll die that frequently, running out of fuel or oxygen, or coming across an unexpectedly nasty part of space that rips you to shreds. There’s plenty to find in Out There but it also gives you enough time for contemplation too.