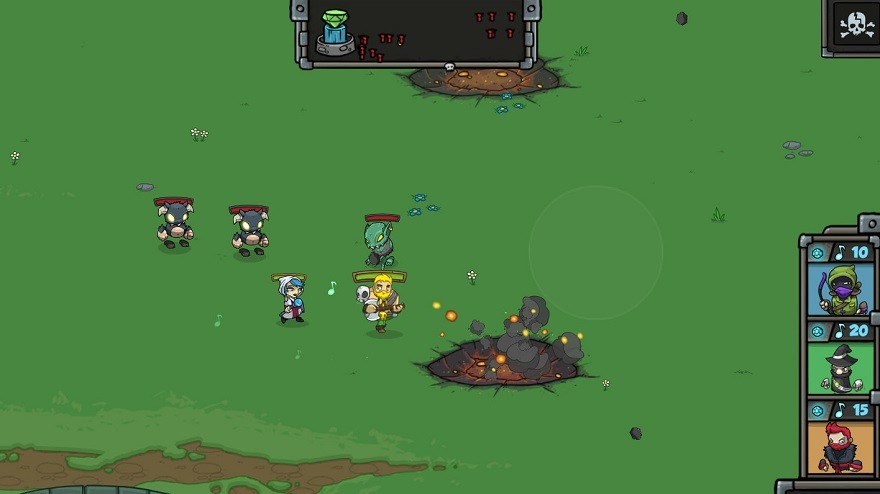 As I play Bardbarian, an impressive debut game from Canadian indie developer TreeFortress, I’m fighting two battles: one on the screen, against ugly goblins and laser-shooting eyeballs, and one in my head. I’m trying to decide whether this is one of the greatest iOS games I have ever played or a total waste of time.

Bardbarian is an old-school role-playing, party-of-heroes game, where axes and magic and fisticuffs meets heavy metal music and tower-defense. You play as Brad, a freelance barbarian who grows weary of “grinding XP, saving useless NPCs, and living only to destroy.” So you craft your weapon into an axe-lute and shred notes to enrapture the peasant folk with music. You leave the murdering to the wizards, archers, and ninjas on your team and the looting to an obedient ratcoon.

All of which, of course, is very cheeky and fun in spirit, but in practice it’s just as much fun. Brad plays notes as you drag your finger and guide him around the screen. Standing still is dangerous—in its dizzy mix of genres, Bardbarian even incorporates the bullet hell shooter—but it’s in these moments that Brad can jam out. A steady stream of notes enables you to summon units who encircle around you and fight the tides of foes automatically, without further command. If the enemies break through your defenses and destroy the town’s precious crystal, your game ends.

The goal, then, is to survive wave after wave, keeping Brad alive through day after day. If he falls, you go way back to the beginning of that morning or noon or evening or night, depending on how far you’ve made it. And since each of those periods consists of five levels, this leads to a hell of a lot of grinding.  If you want to stand a chance, you’ll need to collect piles and piles of gold. The glittering stuff can purchase shop upgrades for your units, improve Brad’s stats, and better fortify the town.

And so, while Bardbarian is inherently fun enough that slaying the same hordes is enjoyable, the meager measure of progress you make is tiresome. The grinding for constant upgrade after upgrade reduces an amazing game to a tedious exercise that makes you question that 99 cents you spent. But then, it’s only a dollar; and for just one more, you can purchase a golden axe-lute that doubles the gold you earn. Try doing it the hard way, and you’ll spend a lot of time dying in Survival mode—an admittedly cool and different trial where upgrades don’t count and party size is infinite, as are the enemy waves, as long as you can withstand them—and in the main campaign, which is best conquered if you start back at the beginning each time. All because that golden axe-lute is always just out of reach.

Microtransactions are a business decision, but in the case of Bardbarian and too many other games they’re a business decision that hamstrings the design decisions. It’s editorial being controlled by advertising; it’s product placement changing the plot. If the gold-doubling upgrade could be earned and not bought, Bardbarian would be a much faster-paced and enjoyable musical bloodbath, even if that meant shaving hours off the time you sink into its campaign.

Does a flaw that runs this deep ruin an otherwise delightful game? It can, if you stubbornly refuse to spend the extra money on extra gold stores and the treasured axe-lute, like me. But for those who do and aren’t burdened by the same laborious grinding, am I simply playing it wrong? Do they get to buy a better game, a different artwork?

Bardbarian, I think, is one in a long line of games that’s fundamentally cracked from the start. Like Brad, I’ve grown weary of grinding for XP, or upgrades, or whatever we’re calling it, especially when there’s so much that’s new and innovative out there to discover.

Come trolls, come goblins; Bardbarian has your number. But microtransactions can bring down the whole village.