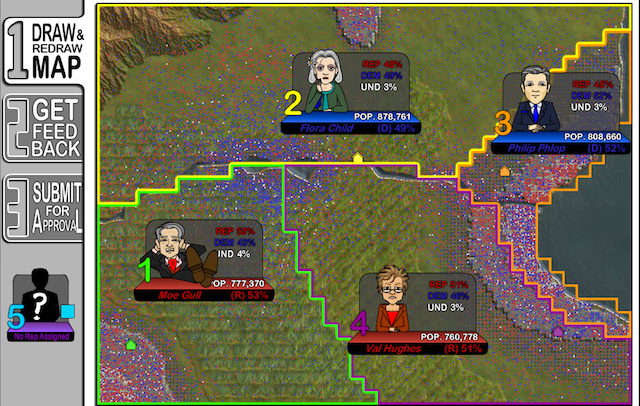 Gerrymandering is one of those entrenched problems in American life that would make people a lot more upset if they understood it. There is, sadly, no Matt Taibbi of redistricting, a writer who has broken this complex problem down to simple components to lay bare its inherent cynicism. There is an election in three weeks and a paltry number of voters will fully understand how backroom manipulations circumscribe their choices.

But we do have The Redistricting Game. It is the best method I have ever seen of teaching the process by which state political parties redraw congressional districts based on census data to protect partisan congressmen.

The game, a project of the USC Game Innovation lab, was made in 2009 to educate voters about the Fairness and Independence in Redistricting Act, introduced by the Tennessee Democrat John Tanner, a champion of redistricting reform. You play as a nameless state’s redistricting consultant with the power to move district lines.

The game starts simply: you must establish population balance among the four different districts. Then it adds layers of complexity: adding an extra district for one party, for example, or doing a deal with your cohort across the aisle to make sure each district has a 55 percent majority in favor of the incumbent.

The goal of the game, according to designer and writer Peggy Weil, is for the player to emerge from a playthrough understanding the basic process of redistricting. The game received almost no press, which is a shame: this may be the best civic engagement tool in the form of a game that I have ever seen.

More on the game, from the creators:

The Redistricting Game is designed to educate, engage, and empower citizens around the issue of political redistricting. Currently, the political system in most states allows the state legislators themselves to draw the lines. This system is subject to a wide range of abuses and manipulations that encourage incumbents to draw districts which protect their seats rather than risk an open contest.

By exploring how the system works, as well as how open it is to abuse, The Redistricting Game allows players to experience the realities of one of the most important (yet least understood) aspects of our political system. The game provides a basic introduction to the redistricting system, allows players to explore the ways in which abuses can undermine the system, and provides info about reform initiatives – including a playable version of the Tanner Reform bill to demonstrate the ways that the system might be made more consistent with tenets of good governance. Beyond playing the game, the web site for The Redistricting Game provides a wealth of information about redistricting in every state as well as providing hands-on opportunities for civic engagement and political action.