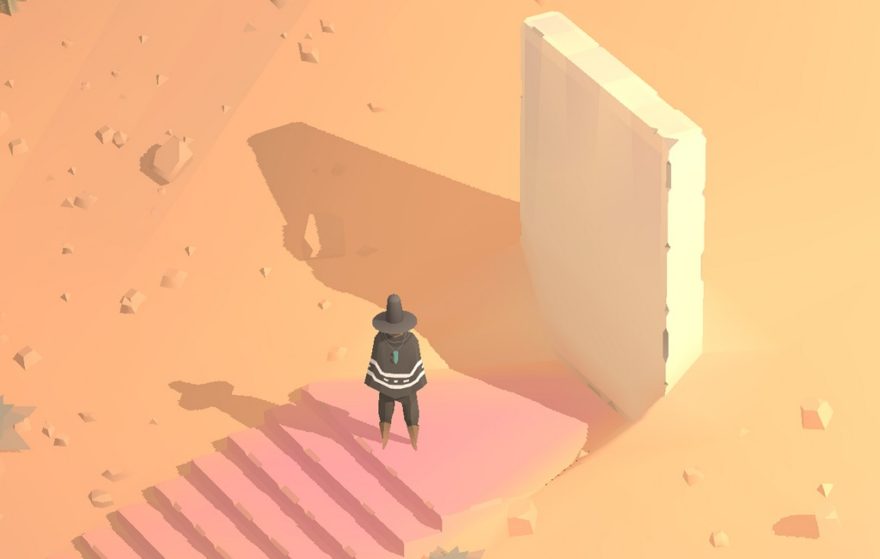 Have you downloaded the iOS/Android Triennale Game Collection yet? We wrote about it a few weeks ago; the gist is that Milan’s La Triennale di Milano, an exhibition held by the Triennale Design Museum, is back after 20 years, and they seem to like videogames. Santa Ragione’s Pietro Righi Riva has commissioned new games from five designers, including Kentucky Route Zero designers and Kill Screen sweethearts Cardboard Computer.

Their entry, Neighbor, is a meditative little vignette along the lines of Mountain (2014) or Animal Crossing. It’s done in Cardboard Computer’s house style: tasteful low-poly art, poetic, spare writing, and a synthesizer score that straddles melodic and ambient vibes. You direct a little person around a sun-bleached, sand-swept crater where they’ve set up a workbench, drawing desk, and cauldron (as you do).

You can make sketches of things you find, or throw coins in a reflecting pool. You can meditate, or sweep the sand from your modernist living structure. There’s always more sand. You can make clay sculptures, or write poetry. You can bury crystals and watch as they bloom into gleaming plants.  You can offer objects before a worn monolith. You can think about your life, and where it’s headed, and what you might do when it gets there.

Occasionally, an honest-to-God cowboy stops by to check on you. According to the game’s pause screen, his name is Sam. He lent you a shovel. Try writing Sam a nature poem and see what he says. He might also like that magazine about trucks that you found. You know Sam’s arrived when you hear him whistling, but there’s no rush. He’s the patient type.

There’s a lingering cosmic vibe below Neighbor‘s surface. The phrase sic itur ad astra, or “thus one journeys to the stars,” from the Latin epic poem Aeneid, pops up a few times. And using Sam’s shovel you can dig up meteorite shards. Nothing is made explicit, though, or if it is I’ve yet to find it. There’s a magnetic pull to this game. It feels like anything could happen in its small, quiet space. Whether or not it does is immaterial in the face of its immaculate, engrossing mood. It’s not really fair how good Cardboard Computer are at this, but I suspect no one is complaining.

You can download the Triennale Game Collection for free on the App Store and Google Play.