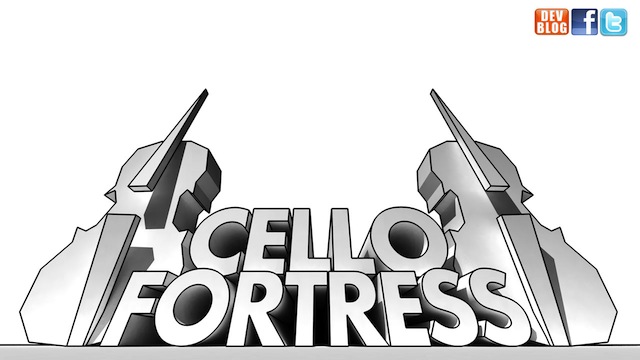 by Bryan Lufkin
The premise is hardly inspiring: four players grab controllers, man tanks, and aim to blast a fortress into pieces. Only one person, the fifth player, can save the base. And he can only do it with a secret weapon. And that secret weapon is… a cello. Yes, like the musical instrument.

This is Cello Fortress. Want to turn on flame-throwers? Fire off a dissonant chord. Aggressive chords activate burst-cannons. The game reacts to the musician’s speed, volume, chords, pitch, and more.

You’ll need a particularly skilled and badass cellist to play, though. And for now, the only such cellist is Joost van Dongen. He’s also the developer.

“The cello is not a ‘cool’ instrument,” says van Dongen. “But it’s fun to watch being played, much more so than keyboards or guitars, simply because a cello is such a big instrument that requires big arm movements. So combined with the game, the cello definitely has a lot of ‘cool’ going for it.”

It’s like Rocksmith, but the electric guitar’s been swapped for something a little more classical. But it’s not like Guitar Hero, DDR, or other rhythm games, either. Don’t expect to be prescribed any hair metal or J-pop to keep up with. The cellist isn’t given notes he needs to hit. It’s all freeform performance. So if van Dongen sees he needs to charge enemy players’ bombardments, he’ll start adlibbing an ominous-sounding melody in order to deploy the attack.

Those other games weren’t van Dongen’s inspiration, either. It was more about his own jam sessions and love for the cello, given the fact he’s played for years and is in an amateur baroque orchestra. (The twin stick-shooter gameplay was inspired by the mecha-filled Gatling Gears, however.)

The game’s still in the early stages, but will be shown at Dutch game convention Indigo September 28 and 29. As of now, the only one who’s allowed to sit on the stool, swing the bow and pound out the notes in Cello Fortress is the creator himself.

“Right now, I like the idea of the game being tied to me,” van Dongen says. “Cello Fortress is a bit like going to a live concert by Joost van Dongen. But maybe it works so well that I want other cellists to perform with it, as well. Or maybe I could add online multiplayer, where I play cello at home and gamers play from home, hearing the music streamed out to them live.”

The missile-launching cellist should likely expect an encore, whoever it is.