Mario is a game that always struck me as highly strange—especially the early games. With almost no motivation you’re set out into a world where you hop on mushroom and turtle people and drop their king into lake of fire only for the princess to reward you with another quest. But, strangely enough, many of the weird things have a basis in Japanese mythology and culture, as well as a few other traditions.

In the very second Question Block ever encountered in any Mario game is a Super Mushroom. This is one of the earliest and clearest examples of Miyamoto pulling from two different traditions, something that can be seen in many of his later games. In an interview with NPR, Miyamoto states that “if you think of stories like Alice in Wonderland and other types of fairy tales, mushrooms always seem to have a mysterious power, and so we thought the mushroom would be a good symbol for why they get it and get big.”

But mushrooms loom large in Japan as well, in Japanese cuisine and in the countryside. Since about the 1500s mushrooms were widely consumed in Japan and only rose in popularity over the next several hundred years finding themselves grilled, boiled and eaten raw. The form is one that was familiar to Shigeru Miyamoto and that he could easily animate with a limited number of pixels.

This combination of East and West, alongside a bend towards simplicity, can be seen in everything from Mario’s design to the design of the castles. The answer to why is simultaneously pragmatic and completely from left field. European-style castles are simply easier to draw, and they communicate what they are a lot easier than Japanese castles, which may look like temples. With regards to Mario’s creation, Miyamoto states in the same NPR interview that big noses and mustaches were “a facial feature that’s characteristic of Japanese people” and that when he was younger he used to like Italian comics. The hat comes from a combination of the pixel limitations and “a hat [made] it easier to draw” instead of hair.

Miyamoto freely admits that he’s often been inspired by his childhood as well. The koopa, for example, is based on a familiar cryptid named the kappa, a kind of river turtle that eats children and lifts women’s skirts. The kappa, like many beings from Japanese mythology, isn’t all bad. They’re known for actually helping farmers and other laypeople and are horrifically polite. While paintings and prints from antiquity depict them as scaly reptiles, many shrines and statues around Japan depict them as much more turtle than salamander. Growing up in rural Japan it’s very likely that a young Miyamoto would have been taught to stay away from rivers with cautionary tales of the Kappa, in much the same way that western countries use tales of boogiemen in order to bring children into line.

It’s important to remember that kappa aren’t openly antagonistic to people. Given the correct circumstances kappa are known to develop Wookie-like life-debts with humans. This mutually beneficial relationship actually comes up in the Paper Mario series, with the characters Koops and Kooper. Both are Koopas that need Mario’s help and join him on his quest. Koops and Kooper’s friendly relationship with Mario despite their species’ general antagonism toward humans is certainly a trope in RPGs like Paper Mario, but it’s also endemic of “actual” Kappa-human relations.

This blurring of roles also occurs in another obvious takeaway from Japanese mythology, the tanuki (raccoon dog) and the kitsune (fox). In Japan each is a kind of trickster figure with the ability to transform to fool humans to either do their bidding or simply make them appear foolish. Within the Marioverse, tanuki and kitsune appear as transformations in the forms of suits for Mario and Luigi (respectively) that appear in the later games. However, unlike the animals, Mario takes on the role of hero. Instead of trying to trick humans or make them appear foolish Mario unleashes this power on other mythological beasts. Gaining a glide move, the ability to dash, glide, and transform into statues, this was one of Mario and Luigi’s most powerful forms in the early games.

Mario and Luigi become other beings who already have transforming powers.

Strangely, like the tanuki and kitsune Mario and Luigi also use leaves to transform. By using a Super Leaf either is able to turn into a raccoon being which behaves similarly to the tanooki or kitsune form without the shapeshifting powers. Oddly, both are able to do this despite the fact that they are, ostensibly, human. There’s little to suggest that humans can also be shapeshifters. Instead, Mario and Luigi become other beings who already have transforming powers. This is unlike the winged hat, a possible reference to Hermes, which Mario simply wears. The Super Leaf transforms Mario into a raccoon and then simply lets him do raccoon stuff.

The lack of animosity between Tanooki Mario and other humans may come from the fact that its trickster ways were not intrinsically Japanese. Prior to the arrival of Buddhism, Japanese animals were revered as lords and keepers of nature with mystical powers. However, the arrival of Buddhism toppled the existing power structure and animals such as tanukis were no longer deified; however, their powers remained leaving them as untrustworthy beings with powers. They became not unlike pariahs despite their origins as minor deities.

This importation of beliefs is also easily seen in Lakitu and Dark Lakitu. The cloud that Lakitu pilots is a figure common across Chinese and Japanese mythology. These flying, rideable clouds are prominently featured in the endlessly adapted Chinese epic Journey to the West. Here the cloud is a means of transportation for Sun Wukong, another trickster. However, Lakitu is not an allegory of Sun Wukong in the same way that Dragon Ball’s Goku is. Instead, the cloud is the only direct connection with no thematic relationship. Like Sun Wukong’s cloud, Lakitu’s cloud is not a power which simply belongs to anyone. Mario, like Sun Wukong, is able to gain the cloud and traverse the world, skipping whole levels the same way that Sun Wukong literally skipped across mountains. 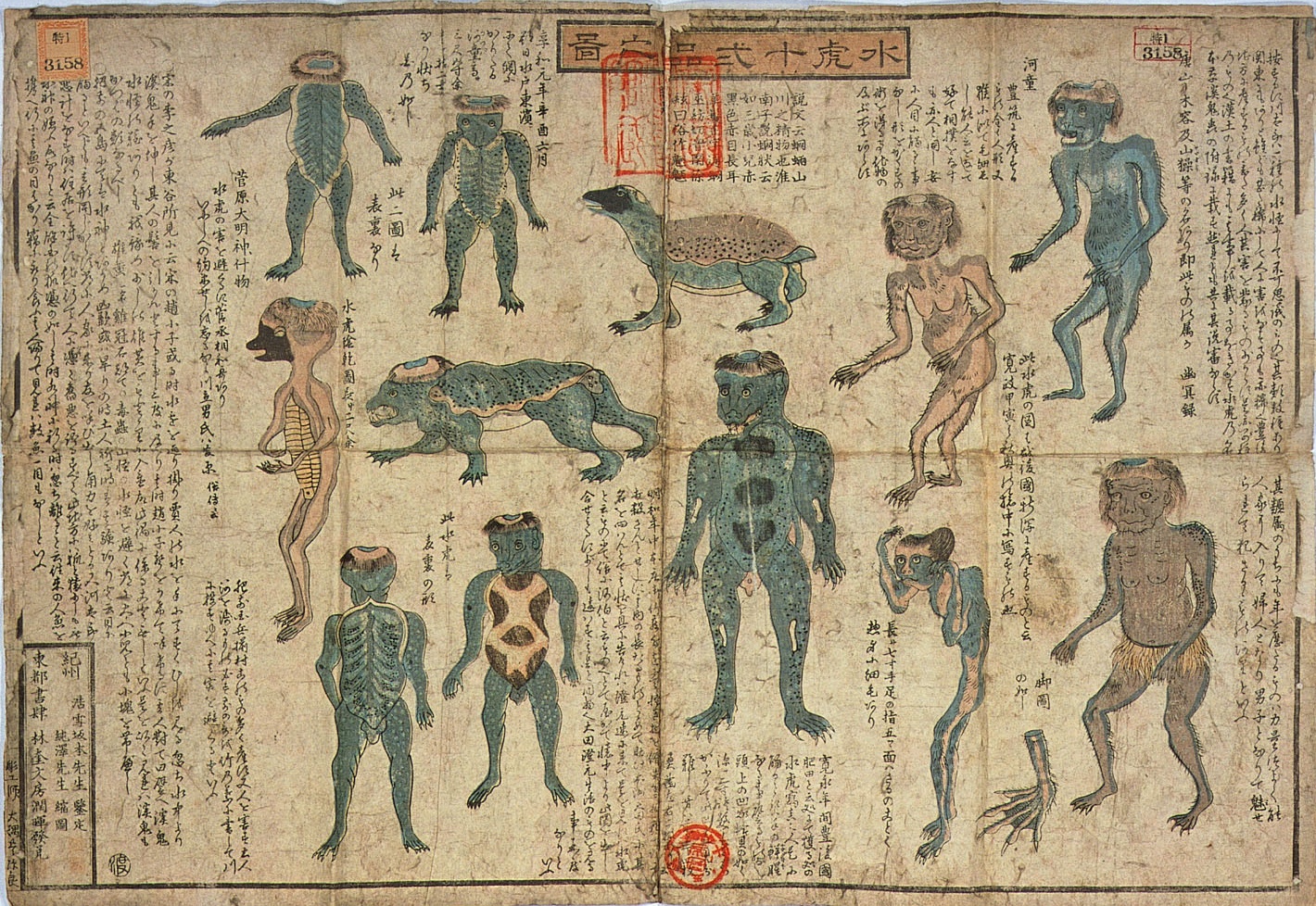 However, Lakitu and its cloud could also have a slightly different origin. Though Raijin, the Shinto god of lightning and thunder, bears little physical resemblance to Lakitu or Dark Lakitu, he may have a more thematic connection, unlike Kappa and Koopa. This would explain the presence of the lightning bolt in Super Mario Kart. If you imagine that all of the items found in a race were brought to the track by characters from their respective worlds then where does the lightning bolt come from? Seemingly it is brought by Lakitu, the race overseer and the only one who rides a cloud on a permanent basis.

One of the final, and easily identifiable creatures, is the Thwomp. Based on the nurikabe, a Thwomp’s sole purpose in life is to impede Mario’s progress. He sits above a passage and simply blocks you when you approach. There is actually very little malice in this act on both the part of the nurikabe and the thwomp; unless you attempt to outrun a thwomp they essentially only attempt to bar Mario’s passage. Any resulting crushing is completely Mario’s fault.

But what does this all add up to? Is there some grand plot constructed by Miyamoto to try and tell us that Mario is in fact a trickster raccoon dog running amok in the Mushroom Kingdom fooling all of the poor toads? Probably not. In fact, after having lunch with a friend of mine, Professor of Japanese history Bill Johnston at Wesleyan University, I realized how far down the rabbit hole I had gone seeking an answer. Johnston explained that these kinds of questions are often self-defeating when Westerners attempt to pose them; Japan operates on a different set of moral and narrative rules than the Western canon does. Why would Mario, a hero, breathe fire? Why give him trickster raccoon dog powers? Why anything? Because Mario is on a mission and those are the tools he has to get the job done. Why would Miyamoto include all of this? Because despite the admittedly pragmatic origins behind Mario and his hat Miyamoto is an artist first, and many of these creatures are seen as fun little folktales—not the stuff of horror, like a boogieman.

Like many great artists, Miyamoto is drawing on a wealthspring of cultural knowledge that extends far and wide. While many games were being made about space or tanks, Nintendo took their very first steps down a different path and started to become the company that is simply different than the others. By intertwining Mario with Japanese mythology, Miyamoto did what he does best: he got creative within the given limits.