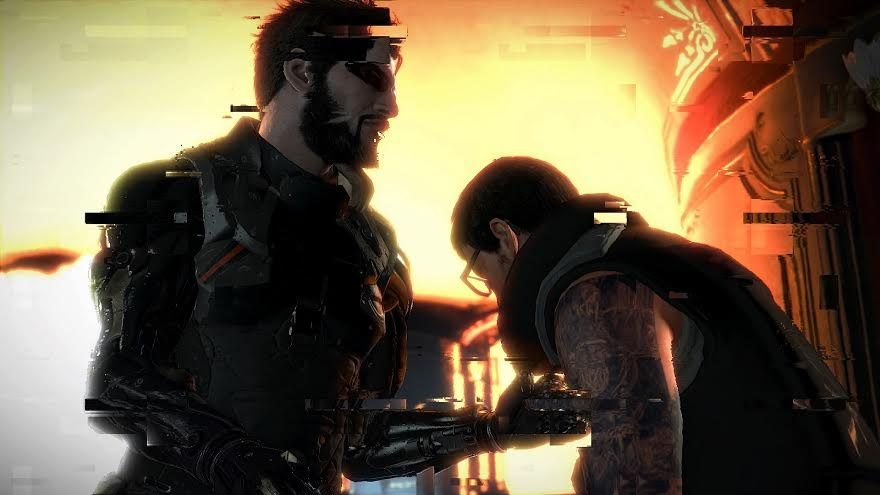 There’s an apartment in Golem City littered with dead bodies. Normally, I’d be the one to put them there, but not this time. One of them was probably named Ana, at least according to the emails in a computer nearby. The messages are from her doctor informing her that she’s pregnant. This would normally be good news. But Golem City’s daycare was recently shut down, the doctor informs her, and infant mortality is through the roof. Without actually coming out and saying it, the doctor seems to suggest that Ana should get an abortion. Given what I’ve seen so far of Golem City, I’d agree.

But how did this apartment—more of a cargo container with furniture, really—end up as a mausoleum? Navigating the blood stains, I loot each body for extra information and some pocket change. I find a PDA that has a message on it from Ana’s husband. “I will not bring another child into this world,” it says. At least I think it was Ana’s husband. Or was the message from Ana to her husband? Either way, it seems someone took the news very badly. The child will not be born in Golem City after all.

These are people I’m too late to help or save

Deus Ex: Mankind Divided is home to many tragedies like this. The bodies only ever tell part of the story, with the rest hidden in nearby computer terminals or PDAs. If you’re anything like me, the details don’t stick half as well as the general impression they create. Email addresses and names, many of them Czech, are strewn about Mankind Divided like confetti. Every person in the game has a unique story, but the precise shape of their life always seems to elude me. One couple in Prague is trying to get a permit from the government for … something. To open a shop, maybe? Or escape the city altogether? They’re debating whether to take their life savings and seek help from the local mob. A few blocks away I come across a well-dressed man lying face down in the sewers and wonder if it’s him—the man I’d been reading about.

The apartments you break into in Mankind Divided are almost always empty. Maybe the people are at work, or fled the city, or worse. Either way, the game seems to have swallowed them up, leaving behind a sea of digital residue to sift through. An ebook sitting on someone’s desk, movie posters hanging on the wall, painkillers sitting in the medicine cabinet—each object builds the sense of a life caving in under the pressures of Mankind Divided‘s world. These are people I’m too late to help or save. I can only witness the fragments of their pre-programmed existence and move on to the next apartment. The result is a world that feels fuller and more textured, not because it’s populated with choice and possibility, but because of their very absence.

This is one side of Mankind Divided. The side that tries to lure you into strange places and take part in people’s most intimate secrets. Despite all of the hacking mini-games and LCD screens, it’s very analog. On a computer, the game only lets you read email or control home security settings, but in the rooms themselves it invites you to take showers, flush toilets, fiddle with radio knobs, or even turn the oven on. One apartment I doubled back to late in the game still had the same front burner on from when I ransacked the place days before.

When elements repeat, it feels thematically significant rather than lazy. From my time spent hop-scotching around Mankind Divided’s scattered European locales, I discovered three constants. Whether in London or Prague, the people of this world are all alcoholics, consummate book collectors, and in love with cereal. I cannot tell you how many times I had to empty bottles of wine or cans of beer from my inventory to make room for more important tools. Boxes filled with “Augmentchoo” next to empty bowls are a harrowing reminder of how agnostic brands connect strangers across time and space.

In Golem City—peering out through the chaos, oppression, and late-capitalist squalor—is a beautiful outdoor bookstore. No one is buying and I can see why: the volume at the end of the row closest to me is labeled “The Manager’s Handbook.” Still, it shows civilization can blossom anywhere, even in an internment camp.

But there’s another side of Mankind Divided. The one that trades in crude analogies and allusions to contemporary politics that have all the subtlety of a prosthetic arm punching you in the throat. In the wake of the “Aug Incident,” an event in which people with augmentations went on a “psychotic killing spree,” people with mechanical implants have been separated from the rest of humanity. This part of the game charges Adam Jensen, now a member of an Interpol task force, with stopping augmented terrorists while trying to uncover who’s really behind the violence.

As we approach the 15th anniversary of 9/11, few things feel more played out than our popular culture’s milquetoast treatment of the politics of terrorism. In the decade it took us to go from the Sum of All Fears (2002) to Zero Dark Thirty (2012), the specter of terrorism was used to do everything from sticking a fusion reactor in Iron Man’s chest to blowing up the White House. Like Tony Stark, we learned to empathize with the agents of terrorism even while decrying their actions. Those responsible for the conditions that might lead to terrorism were not bad institutions, or bad systems, but bad actors. If only we could all elect enlightened leaders there might be peace. Give a rich Western billionaire a power suit and he will save the world.

This is the soft consensus that bleeds so many political parables dry, and Deux Ex: Mankind Divided almost gets around it. Climbing up through the towers of Golem City, I eventually encountered the political leader of an Aug rights group called Talos Rucker, who was trying to ease humanity’s fears. With the sunset behind us, away from all the shooting, we argued over ideology and political tactics. The dialogue wheel was only built for two, even though there are three of us in the room, and so while I can try to persuade the activist, or ridicule him, I can’t befriend him. A pacifist, Rucker was adamant that his ideals could be achieved without violence. Jensen thought Rucker was a pawn being manipulated from afar for corporate and political gain. Every time I looked to bring my protagonist around, his skepticism and realist posturing got in the way. By the end, even Rucker seemed to be more convinced by Jensen than I was, but more shooting started before we could discuss it further.

rivals anything Tom Cruise will accomplish in his lifetime

In this way, the game employs action setpieces to change the subject. Instead of prolonging the conversation tree and seeing where it leads, Mankind Divided lurches back toward the militaristic paradigm of shows like 24 (2001) and MI5 (2002) where it seems most at home. If Jensen is fighting on the wrong side, the game doesn’t want you to spend too much time thinking about it. You might not approve of Jack Bauer’s methods, or agree with the government’s self-serving agenda, but who has time to offer an alternate when so many innocent lives are at stake?

It’s here that the usual suspects are given room to rear their hackneyed heads. Viktor Marchenko is the political militant whose grievances are justified but whose methods are not. Jim Miller, an ex-military spook who heads up the Interpol task force, would prefer to focus on the counterterrorism mission at hand rather than investigate its causes. And then there’s Adam Jensen, dutiful company man, trying to negotiate between both extremes. The trio ends up being adequate purveyors of these myths. Each is sympathetic in his own way. Each is also a monster. And, of course, all three are men. If this side of Mankind Divided seems reactionary, given the current political climate of pre-election America, it’s because it is. The game puts Jensen in-between a rock and a hard place, between state-sanctioned terrorism and its anarchist counterpart, and in so doing stacks the deck in his favor. When you find yourself wishing for the pre-crisis days of Human Revolution (2011), you know you’ve lost.

For being a cyberpunk ode to the potential promise of transhumanism, the missions around Mankind Divided‘s central narrative feel terribly familiar. A firefight in a sandstorm on a high-rise in Dubai. A bank heist in Prague. The escape from a secret science facility in the Swiss Alps. They could all be ripped from the storyboards of 90s Bond movies or the next Mission Impossible. And, indeed, the way Mankind Divided gracefully shifts back and forth between air-duct stealth and a festival of automatic weapons probably rivals anything Tom Cruise will accomplish in his lifetime. But Adam Jensen will never have the charisma to make something so abundantly familiar as doing three double silent takedowns in a row work on its own terms. It all feels a bit like Gap’s version of Transhumanism; #normcore draped in a unisex trench coat.

When I finished Mankind Divided, I started a New Game+, but not to retrieve data from the Palisade Property Bank without killing anyone, or to see what would have happened if I had finished my investigation into the most recent train station bombing. Instead, I did it so I could fly back to Golem City and discover what really happened to Ana. The Illuminati’s convoluted schemes and a byzantine labyrinth of MacGuffins to be chased could wait this time. Contrary to what much of Mankind Divided would have you believe, if there’s any hope for salvation in the game, it won’t be found by unraveling a conspiracy.