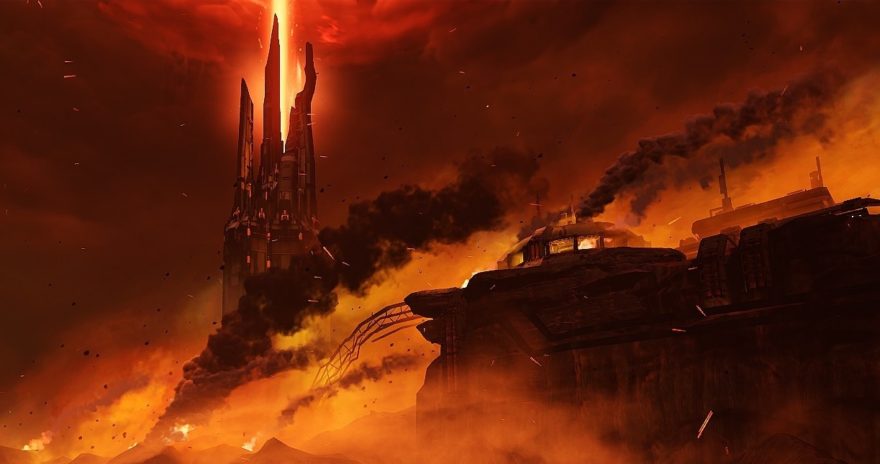 In the Abrahamic religions—and the texts that have grown out of them—Satan is a fallen angel, cast out of heaven for daring to rebel against God. Though his name is synonymous with fear and evil, it’s Satan’s tireless, implacable need to oppose everything God wills that truly characterizes him. He’s a catch-all for the misfortune of heroes and nations. He’s a scoundrel who’s always up to overturn the plans of the master of the universe.

Back in 1993, id Software’s DOOM was another act of rebellion. Created by a small team of industry upstarts, DOOM (like many contemporary metal bands) latched onto Satanic iconography to mark itself as dangerous—a raised middle finger to the authoritarian mainstream of the morally panicked religious right then dominating Western culture and politics. DOOM was meant to feel threatening in both imagery and business. Filled with inverted crosses and goat-headed sigils, splashed with gore, its free “shareware” levels spread like wildfire through the young internet.

something clicks into place

Now, more than 20 years later, id has returned to DOOM, reimagining its best-loved creation with a game called, fittingly, DOOM. It’s a difficult proposition not just because nostalgia can be so unkind to revisits, but because, more than anything else, the first DOOM is defined so largely by its attempt to buck tradition—something that a backward-looking reboot can’t replicate.

The first moments of 2016’s DOOM make deliberate reference to the series’ past, presenting a worrying first impression. A man’s muscular arms tear free of iron shackles and grab a laser pistol. He blasts through crowds of skeletal zombies as if his feet are freshly sharpened skates and the corridors are newly polished ice. It all feels familiar and, at first, too much so. But something clicks into place once the player has stepped into the bomb suit and ski helmet of the Doom Marine’s armor and located her shotgun. The weapon punches into the leathery chest of a monster, shoving them backward and leaving them reeling in place, glowing a tantalizing blue. Push a button and the Marine’s hands thrust out, wrenching the creature’s neck around or punching straight through its sternum so it explodes in a shower of viscera and health-restoring orbs. By the time a chainsaw is found and the player has sawed through the protesting arms of a demon (that bursts with ammunition pick-ups), a rhythm is established that buoys the entire game.

The original DOOM is a game of speed. It demands quick thinking in navigating the Marine around the fireballs and gnashing teeth of its enemies. Choosing the right weapon for the job; prioritizing which demons to kill when an arena is full with a variety of different types; balancing the need for ammunition and health pick-ups—all of it requires on-the-fly tactical thinking of a kind that’s largely vanished from mainstream shooters.

If the 2016 DOOM did nothing more than replicate this style of play with improved audiovisual fidelity, it would be a hollow effort—a fresh coat of paint applied to an already sturdy house. Instead, it takes the fundamental joys of the original DOOM’s projectile dodging and implements subtle tweaks that, with time, create something novel out of familiar parts. Fighting through waves of demons still requires quick footwork, but the ability to smash essential health and ammo from the wavering almost-corpses of the monsters introduces an important new element. Firing off rockets from a distance must eventually be combined with leaps into boiling masses of growling beasts. The player has to be ready, when the screen or ammo count flash a dangerous red, to wade into the thick of danger to smack potentially life-saving items out of deadly piñatas.

The immediate feedback of these up-close kills is resounding. The controller rumbles along with the crunch of bone and the wet thud of organs, the Marine and player’s hands achieving gruesome symbiosis as a physical reward on par with the visual thrill of a rapidly filling health bar. The pace of the combat—constant changes in proximity mimicking a hyperactive boxing match—is unrelenting. All the while nü-metal guitars chug and squeal, their too-clean production propelling the action with a crushed Ritalin fervor and greasy-haired charm that easily matches the 1993 DOOM’s MIDI noodling.

DOOM not only does a fantastic job revising its source material’s combat, but also its blend of sci-fi tech and demonic horror. The Union Aerospace Corporation (whose Martian base serves as setting) is depicted as a cult-like corporation, its employees literally mining hell for resources while ritually prostrating themselves before powerful CEOs and senior researchers. The UAC’s enormous authority over its employees is a satire of not just modern day corporate power—one hologram proudly advertises the UAC’s work in “weaponizing demons for a brighter tomorrow” while an informational log urges new employees to sign up for team-bonding pentagram tattoos—but also the power structures in the Christian church tradition used as the basis of its depiction of hell. (It’s a troublingly unexamined echo of Eve and the original sin that, of the few characters who make up the cast, it’s the lone woman who is intoxicated enough by hell’s power that she facilitates the demonic invasion.)

Opposed to the UAC’s hell-enabling mission is the Doom Marine—a primal and anarchic force. He’s a violent monster but an agent, ultimately, of good. Though he never speaks, the Marine subverts both the rigid structures of a massive corporation and the player’s expectation of the personality a silent character can possess. Through his arms alone, the Marine is responsible for some of the best humor of the game. When he comes across the floating robots who provide weapon upgrades, the Marine yanks it from the air, takes what he needs, and smacks it to the side in a beautifully animated bit of recurring slapstick. When tasked with shutting down the transfer of a renewable energy resource, he smashes apart terminals rather than carry out the complicated work of properly stopping the process and saving the incredible technology.

Id Software has expended plenty of effort to justify a return to the narrative and play style of the 1993 DOOM. The spirit of rebellion that made that game such a bold statement is impossible to replicate—it’s too much to ask that a reimagining match the unquantifiable chutzpah of its source material. All the same, any iteration of DOOM will always be held in comparison to what’s come before. Rather than attempt to emulate design that was impactful because it was released in a different, bygone time, the new DOOM understands that there are other ways to capture the appropriate spirit. It knows its Halloween store gore and demons are no longer shocking. It understands that this culture has changed, and that attempts to repeat prior tricks will only lead to bland pastiche. The 2016 DOOM’s rebellion is smaller than its predecessor, but still impressive: it is unabashedly itself. It’s a game with confidence in the worth of revisiting its history and an earnest belief that doing so can result in much more than an empty exercise in nostalgia.