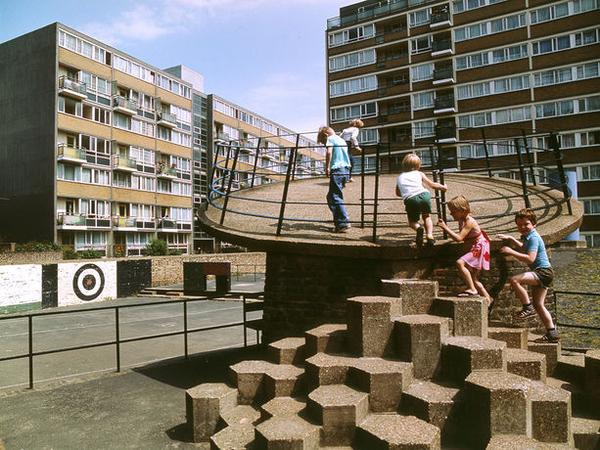 Brutalism gets a bad name. Ok, let’s be honest, it has a bad name. If tomorrow morning you were tasked with encouraging parents to send their kids to a specific playground, you probably wouldn’t call it brutalist.

Or would you? For a brief, wonderful moment in the middle of the 20th century, architects and planners endeavored to design brutalist playgrounds, and the results were often wonderful. These playgrounds are now the subject of an exhibit at the Royal Institute of British Architects (RIBA) by the Assemble collective and artist Simon Terrill. To mark the occasion, The Guardian has a series of images from the exhibit on its site. Go look at them. The rest of this article, like a concrete play structure, will still be here waiting for your return.

While brutalist playgrounds were cast from concrete, they were no more (and probably less) prescriptive than those that followed in their stead. The playground images in RIBA’s exhibit as well as the foam playground created by Terrill and Assemble are, for the most part, abstract collections of shapes, steps, and tunnels. The exact meaning and uses of all these parts was up to their users. Compared with contemporary playgrounds, their tree houses that look like tree houses and clearly indicated passageways, this is what freedom looks like.

In her essay, “The Overprotected Kid,” The Atlantic’s Hanna Rosin observes, “Kids once took special pride in “knowing how to get places” alone, and in finding shortcuts adults normally wouldn’t use.” Note the use of past tense in that quote; Rosin contends that this sort of freedom has been lost to the obsessive forces of ‘safety.’ The hard edges of the concrete playground do not scream safety and have largely disappeared, but at what cost? Is a slight reduction in the number of scraped knees really enough of benefit to justify a childhood spent in a stunningly literal world?

The value of the brutalist playground is not, however, limited to child’s play. In this weekend’s New York Times Magazine, Alexandra Lange asked seven prominent architects to mount defenses of buildings that have been panned. Lot-Ek’s Ada Tolla stood up for the Vele di Scampia in Naples, Italy.  She explained: “None of the planned public spaces, amenities, schools or offices were ever constructed… For me it is important to recognize that the Vele is not a failure of the architecture, but rather a failure in execution and management.”

Though the Vele is not a brutalist building, Tolla’s takeaways extend to the playgrounds in RIBA’s exhibit. Brutalist complexes are often derided as harsh and unwelcoming, sometimes justifiably so, but many of these judgements take place in a vacuum. Brutalist playgrounds, like those that weren’t built in the Vele, were meant to humanize their broader environs, to make them more obviously hospitable to human life. The harsh edges of concrete can indeed be softened by more concrete.