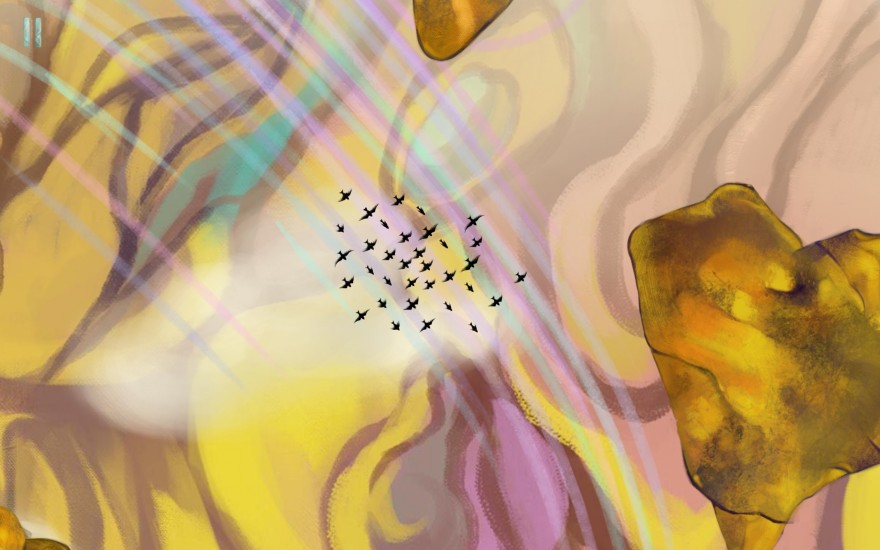 Think of all the words that an eagle typically conjures: mighty, inspiring, soaring, majestic. The eagle in Gathering Sky is none of these. I don’t think I’m going beyond myself to say that, frankly, it’s a bit of a shit. I know we shouldn’t wish an excruciating death on any of Earth’s creatures—especially in the wake of the whole Cecil the lion incident—but I can’t help it. I hope that eagle dive bombs a buzz saw.

Made of angry claws and a screech that inspires only terror, the eagle in Gathering Sky exists for one purpose, and that is to snatch my birds out of the sky. It’s one of the most pleasant videogames you could ever hope to play up until that point. With a finger, you guide a single bird several thousand feet in the air, through wispy clouds, over green swirly fields and cottages straight out of a Monet painting. You watch your feathered passenger flap and swerve, chipper to be alive, the jubilant strings in your ears telling you this much. It’s a wonderful dance-like form of play that turns you into a conductor, your finger a baton, controlling birds as if a melody.

a full range of emotions to experience.

Then it gets better. Appease your curiosity in a glowing orb and, upon contact, it’ll add another sprightly pair of wings to the chase. The multiplication continues, your flock growing in size, no longer an individual but a shape made of birds that carves through the sky on a race track made of rainbow-streaked gusts of wind. And yeah, you do get attached to each one of these birds despite their identical look and complete lack of personality beyond being flap-happy. This is why, when that eagle suddenly arrives, snatching them one-by-one out of the air, it’s heartbreaking and shocking.

Don’t get me wrong, as much as the pleasant moments of Gathering Sky are beautiful, the sudden turn in grace with the eagle’s arrival and later on with a deathly thunderstorm are important to the whole experience. It’s about adventuring into the world, surviving, it asking you to understand that the good comes with the bad. There’s nothing you can do about it except keep flying.

From what I’ve played of it, there’s something orchestral about Gathering Sky (beyond its music); tragic like a stage play can be, giving you a full range of emotions to experience. As is often the case, trying to explain it meaningfully with words is second to experiencing it yourself, and soon you’ll be able to. A Stranger Gravity, the team that made the game, has announced that Gathering Sky will be out for iOS, Android, Windows, Mac, and Linux on August 13th.

The team calls it a “playful, experimental adventure about guiding a flock of birds across the sky, and invite you to “dance in the winds of a far-away world and create an emotional story without words.” That’s about as insightful as anything I can come up with. You’ll understand soon enough.