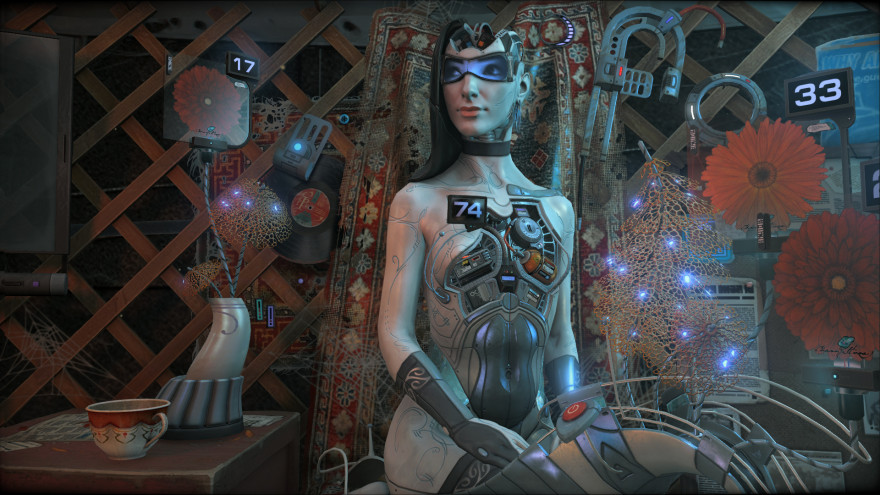 The yurt is full of mysteries. Spices and cooking utensils attesting to months of meals in solitude. Shelves and drawers full of tools and knickknacks; faded pictures of relatives; a TV and tablet that look like they’re from 2005, even though it’s the distant future. You don’t know who you are, nor do you know what happened, but every surface is covered in scraps of paper that add lines to the obituary of a long-dead world. Newspaper clippings about the “contamination sphere.” Magazines announcing new advances in augmentation. A note from someone, somewhere: Times have changed, grandpa. These days any moron can copy DNA. Practically everything is interactive; the only thing that permits no interaction is the altar, containing a statue of Buddha and the Tibetan Book of the Dead. But across from the altar sits an even more enigmatic figure: an android woman, legless, turned into a kind of makeshift flower vase. For now, it’s time to make breakfast.

Cradle’s title makes a lot of sense in at least one respect: it’s a game that works best when it treats you like a baby, confining you to a limited space and asking you to pick up, fondle and throw the objects around you. The parts of the game that don’t work at all are the parts that treat you like a child, asking you to solve colorful cube puzzles that require little more than fine motor skills and seem designed to, above all, produce temper tantrums. It really feels like two games in one. The exploration parts engage the senses and find ways to convey some significant ideas about the relationship between videogames and transhumanism—ideas more important now, with mainstream VR around the corner, than ever before. The puzzle parts are like Portal minus the fun, challenge, or irony. It’s not just that they’re tedious. To me, they undermine everything the game is trying to do.

The yurt sits in the middle of a vast stretch of rural Mongolia, and what you learn quickly is that even rural Mongolia has been decimated by a virus that has something to do with humans’ insatiable appetite for tech-enhanced self-improvement. This is pretty familiar territory. Stories about transhumanism since Frankenstein—or better yet, the myth of Icarus—have tended to dwell on the downsides. One downside is sheer hubristic self-destruction, the idea that those who pursue human perfection will inevitably end up destroying humanness itself. Another is rampant inequality, the specter of a world governed by eugenicist principles. When it was announced a few months ago, Deus Ex: Mankind Divided attracted a lot of controversy for tossing around the phrase “mechanical apartheid.” Maybe it’s questionable, but it isn’t out of the ordinary. In certain corners of Silicon Valley, transhumanism is a legit life philosophy; in videogames, it tends to be a vehicle for dystopia and body horror. In MGS4, Snake’s body is being ravaged by the nanomachines inside him. In Mass Effect, which is otherwise pretty pro-biotic (not in the sense of yogurt), too much Element Zero can make you a monstrosity. In BioShock, the act of “splicing” produces both the hero’s primary abilities and legions of murderous psychopaths. Until Ray Kurzweil himself designs a game in which the goal is to cheat death for as long as possible by amassing a personal fortune, taking 100 pills a day, and staying alive just long enough to benefit from the nanotech revolution, videogames will remain skeptical toward our inexorable augmented future. Even if it could very well make them all-pervasive.

Then again, videogames love transhumanism. They love it in the same way movies love the frontier and novels love neurosis: because it’s something they seem almost designed, as a medium, to depict and grapple with. They evoke it through their systems: ability upgrades, character loadouts, leveling, “limit breaks,” “god mode.” But they also evoke it in their very nature, as human-machine interfaces that so often promise the vicarious, imaginative thrill of being in a better and less vulnerable body. That quintessential Titanfall moment when your character gets hoisted into the cockpit of a hulking, deadly prosthesis and comes alive in a new way is basically a metaphor for what’s already going on at all times: you, the player, jacked into a body that can run, jump, and shoot better than you can. The conceptual affinity creates some interesting tensions in a game like Deus Ex: Human Revolution. As a narrative, it remains purposely ambivalent—if not downright pessimistic—about the ethics of human augmentation, showing you how the technology can go awry. As a game, as an experience, it puts you in a position where augmentation is difficult to resist.

What makes Cradle different is that it’s a game about transhumanism that affords the player zero transhumanist opportunities. You can walk around, look around, jump a little, maybe use a flashlight or turn on the sink. That’s about it. You are confined to ordinary flesh and bone. Every other character in the game—there aren’t many—lives in an “m-body,” the kind of android vessel built long ago to house human consciousnesses ready to discard their fragile sacks of meat. They glare at you through their eye-screens and speak in a tinny voicebox monotone. You speak in a monotone as well, but it’s a human monotone, and it sounds like the emotionless boredom of a math major helping his theater friend do line readings. Your voice gets grating pretty fast, as you click through reams and reams of expository dialogue, but it connects with every other limitation of the gameplay experience in attesting to a single truth: You are human, as far as you can tell. Everything else has left humanness behind.

it’s good to be human

And it’s good to be human. It’s definitely better than the alternative. Much of the game involves switching on Ida, your legless transhuman roommate, and trying to repair her part by part. She can’t see without new eyes; can’t breathe without an artificial lung; can’t live without a new battery. She will never be able to move. Later on she tells you that the “apartheid” in this world is not mechanical but aesthetic: the virus, a kind of ugliness incarnate, can only be subdued by the energy released by beautiful people and beautiful things. Flowers have become the new fossil fuel, precious and scarce; beauty has become a quality not beheld by the eye but measured and collected by machines that can abstractly appraise genetic perfection. In that context—in the context of Ida’s own disabilities and sensory deprivations—the very limited activities you can pursue in this game start to seem a lot less limited. The everyday business of looking around becomes a kind of superpower, a gift not to be taken for granted. The mundane–finding the pot, filling it with water, finding the knife, cutting the fruit–becomes the marvelous. Rather than inviting you to feel the vicarious thrill of enhanced abilities, the game reminds you of the sublime complexity of the body you already have.

That is, until you reach one of the puzzle rooms, which just make you hate your body and its stupid, awkward limitations. Cradle is a game of two buildings: the yurt and its secrets, the derelict amusement park and its puzzles. Every time Ida needs a new part, you have to go do a puzzle room to get it. And these puzzle rooms are just the worst. Imagine a McDonalds PlayPlace designed by B.F. Skinner. Each room contains several levels of multicolored cubes, all of which can be picked up, thrown around, or busted through a la Minecraft. Your goal is to toss a certain kind of cube into an uprising stream at the center of the room, 30 times. Easy enough, in theory. But you are pursued relentlessly by a demonic jack-o-lantern that blows up several cubes at a time or traps you in a concrete cube-box, and it’s all too easy to fall through a hole in the cube-platform and into the water below, which sets you back 3 points every time. The controls and physics are sluggish and imprecise; you never know how far a jump will take you or whether a tossed cube will make it home. It feels like playing basketball inside Jello. There are four puzzle rooms, and they’re all supposed to have different “themes,” but they’re all exactly the same. They can be skipped, but they also comprise about half the game’s total length.

Cradle begins with amnesia and in its very form enacts recollection. It doesn’t actually matter who you are. You’re here to remember the fundamentals: you can see, you can learn, you can walk, you can breathe. It’s too bad that half the game—the half that tries so hard to be a game—makes you wish you could double jump with some rocket implants.