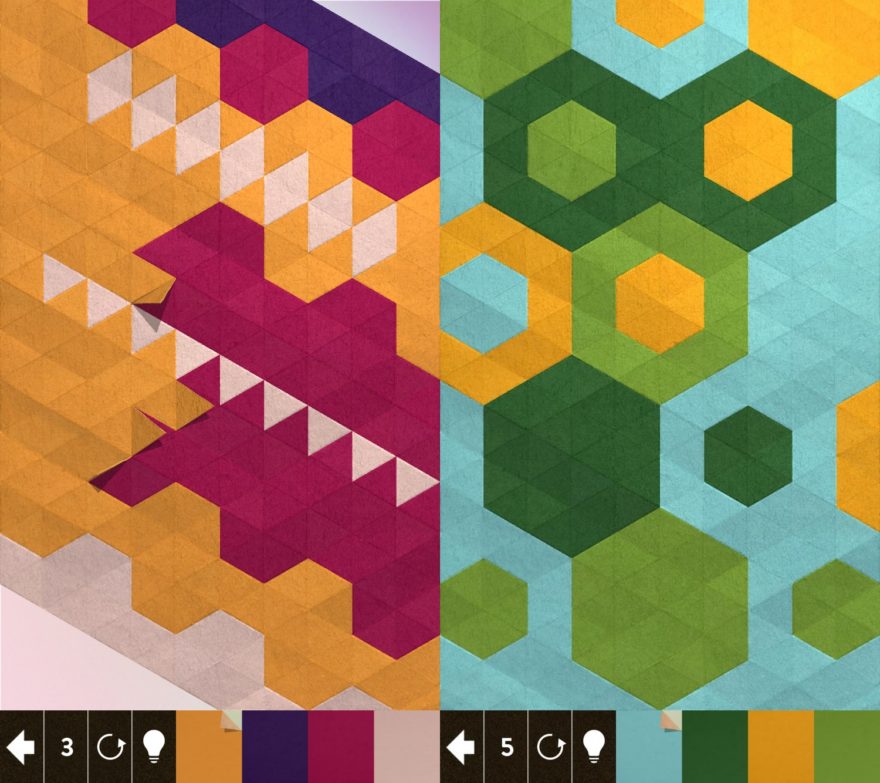 State of Play is known for creating videogames out of physical materials. Their biggest to date is Lumino City (2014), an adventure game set across a mechanical metropolis that the team actually constructed out of paper, card, wood, miniature lights, and motors. Outside of that are smaller titles like INKS, which turns pinball into a form of painting, and KAMI (2013), a puzzle game made out of origami squares.

The next game from State of Play is going to be KAMI 2, which once again is built from tiny pieces of colored paper, scalpels, and glue. Patience was also a crucial ingredient that went into making a game like this, as Dan Fountain, the creative lead on KAMI 2, told me. “Hours were spent at the local art store, poring over paper types to get the best texture,” Fountain said. “We spent a lot of time lighting these to discover how the paper responded to light, creasing, and cutting.”

Eventually, after picking out the right paper, Fountain and the rest of the team were able to put together the two keystones for the project. The first was the prototype you can see below.

The original paper prototype for KAMI 2

The idea in KAMI and its sequel is to make the entire sheet of paper in each level a single color within the number of moves you’re given. You do this by first selecting a color at the bottom of the screen and then tapping a paper tile to turn it into that color. All other tiles connected to that one you tapped will then fold (with a satisfying papery sound) with a ripple effect into that new color.

So, in the prototype pictured above, you would select yellow and then tap a blue tile to turn them all yellow. Later levels introduce more tiles and divide the paper into more shapes to increase the challenge.

The photo used as inspiration for KAMI 2

The second keystone for KAMI 2 is the photograph above that was used for inspiration. “Once we had this example, there was a big technical challenge to getting it looking great in-game,” Fountain said. “When simply using a photograph as a texture, it still looked jarringly flat when being lit from different angles. Instead, we invented our own method of scanning paper textures using a series of lit photographs.”

Fountain explained that the light and texture of the paper in KAMI 2 uses a highly-detailed 3D lighting model, capture from a real sheet of folded paper. “From any angle, the light catches the paper realistically and every cut, fold, and crease comes to life,” he said. “You can even gently tilt the phone and the paper responds as if it is being lit by a static light in the room.”

“We joked amongst ourselves that we were making our jobs really difficult by finding the most complex way of rendering a single sheet of paper, but we think it paid off,” Fountain added.

Capturing the 3D surface of the paper

While the premise of KAMI 2 is the same as its predecessor’s, the major difference is that instead of squares, its puzzles are made of triangles—a “significant upgrade,” in Fountain’s words. “Using triangles instead of squares was both a visual and mathematical advantage, we can actually design puzzles with properties that weren’t possible before,” he added.

KAMI 2 also has a ‘Story’ mode that doesn’t tell a direct narrative as such but has a logical mode of progression. The idea is for it to take players on a journey that teaches them different techniques and skills that can are integral to KAMI 2‘s design. “We’ve also snuck in a few surprises and twists,” Fountain told me.

“We really love the moment when a player gets to a puzzle which is slightly more complex than the previous one, but can be done in the exact same number of moves, they are always shocked, confused and eventually become determined to conquer,” he said. “There are also several moments when a puzzle looks very similar to the last, but needs to be solved in a completely different way. One of my favourite comments from a player was that he felt as if he was having a ‘conversation’ with the puzzle designer as he progressed. We want all of KAMI 2 to feel like this.”

While the Story mode ensures that players get to know the ins-and-outs of the paper puzzles, KAMI 2‘s new level editor puts their knowledge to good use. Each player is able to publish a portfolio of levels so that the community can play them. If a player makes levels that impress others then they’re able to earn prestige. But that’s not the only community-focused features of KAMI 2 as it also has a global ‘Daily Challenge’ that lets players go on a winning streak and compete against their friends on the leaderboard.

State of Play has already soft-launched KAMI 2 for iOS in select countries and are already exploring player-made levels. They’re hoping to open up the game for global release in 2017.

Find out more about State of Play and its games on its website.