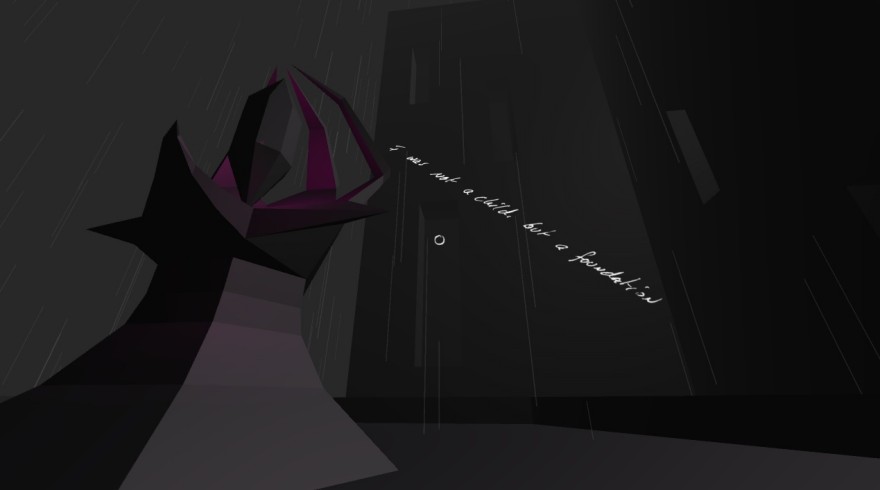 The architecture in Kitty Horrorshow’s videogames has always had the biggest presence. In CHYRZA it was a midnight pyramid that bore down upon you while collating pieces of its monstrous history. Sunset Spirit Sky had jagged helter-skelters to climb and silhouetted windmills with blades like black knives carving up the deep pink skies. Her first, DUST CITY, seemed to serve up a slice of hell’s residential areas for us to navigate with trepidation.

what all the stones and their many shapes represent.

Horror and fear were tied to these buildings. And what made them more unnerving was their utter stillness; a towering killer poised, ready to strike. You got the impression that they were always staring you out. But in her latest game, which is titled Rain, House, Eternity, the mausoleums and lost floating structures you pass by and climb up in your search for precious purple gemstones have an extra dimension to their personalities, one that’s not present in their cousins in Kitty’s previous games.

Sure, they’re frightful at first. I don’t think a forest comprised of gigantic spikes that make a laughing stock out of your insignificance couldn’t be intimidating at first sight. But, as you ascend each stage of the ancient structure, what unfolds is a story about change. And central to it is having you realize what all the stones and their many shapes represent. It’s something close to hope and freedom.

In introducing Rain, House, Eternity, Kitty says that “it’s easily [her] most personal [game] and a lot of [her] went into it, things [she] might not otherwise have shared.” You can get an idea of the topics at hand by heeding the content warnings that comes along with it: “emotional abuse, suicide/suicidal ideation.” This all plays out in short snippets of text that appear every time you collect one of the gemstones. The unseen character talks directly to you, recounting what happened to them when they were younger, leaving out the details in favor of describing how it made them felt.

Sometimes it’s hard to ascertain as to whether this character is speaking in metaphor or not. At one point they mention how they were made to prostrate to altars, to worship edicts from the elders—that could be literal, or it might be figurative. What is clear is how they were left scarred, wondering what heresy they committed by being born, and mistaking expectations for love that consequently left them feeling “such loneliness.” The rain beats down on you relentlessly in a dramatic example of pathetic fallacy as you read how they felt like a “coin thrown into a well of antipathy,” which in their mind made them “not a child but a foundation.” It’s a depressing tale but it doesn’t stay that way.

“I didn’t need to be comforted anymore.”

Rain, House, Eternity ends up being a game about overcoming a traumatic and painful past, one that you thought inescapable, and that would haunt you forever. One player, Rook (who is also a game creator) certainly perceived Rain, House, Eternity in this positive manner, saying about it: “Many games comfort me. This one quietly let me reach a place, on my own, where I didn’t need to be comforted anymore.”

How a trip through this videogame manages to achieve that is something you should find out for yourself. In short, and without spoilers, it encourages those who need it to make a decision not only in the game but in life itself. But before getting there, it reveals the vast possibilities that one of the options opens up to you, and this is illustrated by the architecture you have trawled over. The revelation is in having the real identity of the columns and spikes and stone platforms revealed. For you realize that out of a single, heavy boulder lies a million possibilities in front of the sculptor, and that sculptor is you.

Oh, and make sure you start the game up a second time after completing it, as there’s a second beginning that you have to see.

You can download Rain, House, Eternity on itch.io. You can also support Kitty Horrorshow on Patreon.