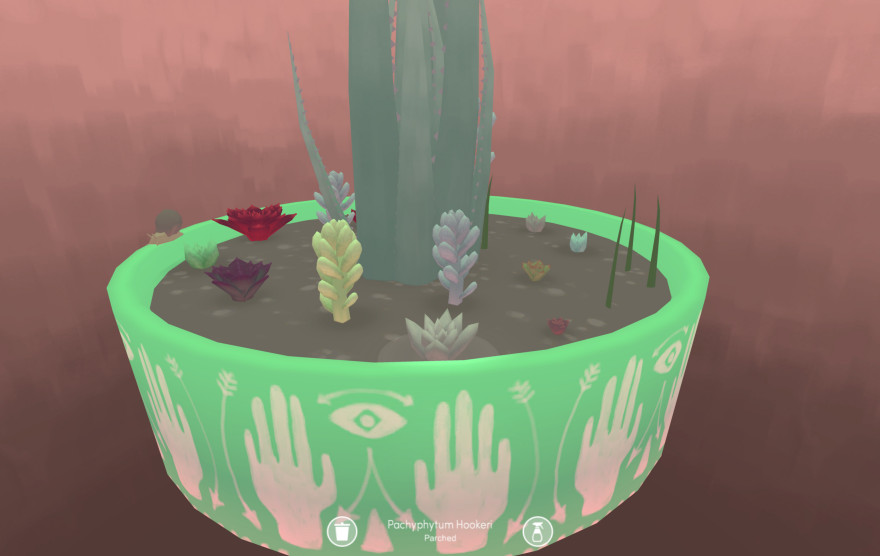 A common answer to the question of why so many videogame players choose gaming as a hobby is “to escape.” What one is escaping could be any number of things, but often the sentiment is that reality is boring or harsh and games are entertaining and fantastical. Yet never is the concept of videogame escapism more paradoxical than in the case of the virtual pet. The act of playing virtual pet games is mundane maintenance work that can unwittingly invade your every waking moment, but the mental solace they can afford and the understated satisfaction of simply keeping something alive can prove cathartic.

In Ice Water Games’ Viridi, you plant and nourish a pot of succulent flora. You begin by selecting a pot from a variety of colorful options as well as a starter bundle of seedlings, which you arrange and lightly spritz with water. Then you can either sit back and wait for them to grow or zoom in close to an individual plant to “sing” to it, boosting the speed of the sprouting process. All the while, twinkling chimes and soft, low-frequency synths lull you into a nurture-trance. A snail makes its way around the outside rim of the pot. You can name the snail.

Viridi, like most virtual pet games, is an experience of living with something instead of relying on direct player input to progress. On PC, Viridi is an additional window to check in on throughout the day. I found myself leaving its precious soundtrack running in the background as I went about any number of unrelated tasks. The game provides an almost therapeutic respite from the humdrum computer workday, but not via escape exactly. No, it’s more that instead of pushing away from reality, Viridi pulls itself closer until it begins to blend in. Playing Viridi becomes another part of the daily routine along with brushing your teeth and feeding the cat.

This year I helped plant and maintain an IRL garden for the first time. It’s been an extremely rewarding experience to see tomato, pepper, and cucumber seedlings grow into mature plants and bear edible fruit. But gardening isn’t without it’s challenges and failures as well. At one point a lawn care worker ran over the corner of the plot with a mower, decimating a pepper plant and bending another in half. Later, most of the garden became infected with a form of blight, and the leaves began to wither and disintegrate. I’d argue that those struggles have made me more attached and appreciative of the plants that managed to survive the summer.

In contrast, Viridi isn’t really interested in trials or tribulations—it’s only slightly more difficult than watching a lava lamp. In fact, the hardest part is simply remembering to play it. As a result, Viridi relies on its aesthetics and inherent player compassion/guilt to form bonds with its virtual pets. The low-poly succulents are portrayed with a simplified realism and labeled by their scientific species names. The polygonal look is quite fitting, considering the leaves of succulents actually have a volume to them, unlike most plants. Yet, for the virtual pet-prone who has been weaned on the likes of cute and quirky fare like Nintendogs and Tamagotchi, the pastel blue stalks of a Kalanchoe Rotundfolia are pretty, but less than squeeingly adorable.

the game is best experienced as an occasional therapeutic exercise

Having only played Viridi for about 10 days, I’d argue that the game is best experienced as an occasional therapeutic exercise—akin to that time your friend spent a few weeks in China and asked you to keep an eye on her cactus—rather than some months-long investment. Supposedly your plants in Viridi can die if over or under watered to a severe enough degree. Though I’ve enjoyed my time with the game, I worry that I’ll eventually forget to check in and plant health will begin to slip, and that downward trend will continue until there’s nothing left but a few weeds and Larry the snail circumrotating the pot ad infinitim. But despite what may await, it’s still been pleasant to have this peaceful little window at my disposal, enriching my desktop with its lullabies and oxygenating my digital space.