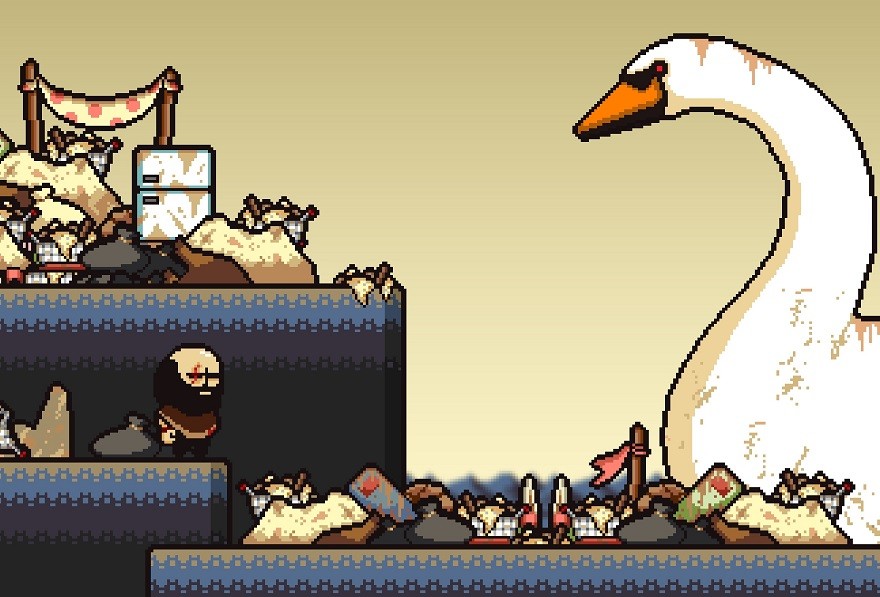 Whenever games allow me to make moral choices, I always play the good guy. Being a scoundrel is fun, but a part of me can’t help but feel sorry when I hurt a character’s feelings (or worse) even though I know that character is no more than data and lights on my screen.

In a game whose Steam page promises that “you will learn that in this world, being selfish and heartless is the only way to survive,” I refused to take the immoral route. I failed. Lisa made being the good guy a lot harder than I thought.

Picture the wastelands and motorcycle gangs of Mad Max. Now add a little Children of Men—only no women and definitely no children. The story of Lisa: The Painful RPG has been done before: a world overrun with violence and the sweat of men, all resources depleted. The world’s gone to hell because for whatever reason nobody knows, all the women died out. The only hope is an infant that the protagonist, Brad, finds abandoned—a baby girl.

He wants to keep her a secret—keep her safe from the world, from the ruthless men who would rape her and torment her. Brad knows evil: He felt it in the punches and kicks of the bullies who beat him and his best friend up on the playground, who taunt him still as an adult. He heard it in the degradation of his father, abusive and drunk, who called him a “worthless shit kid.” Brad crying alone in his room is our introduction to the pain he would face. Cue the title card.

Because Brad knows monsters, it might be easy for him not to become one. When the girl, nicknamed “Buddy,” grows older and is found out, she’s taken by gangs and men who would hurt her. Brad vows to save her. He sets out on a mature, Earthbound-like adventure, where enemies and allies alike do weird moves in battle and you fight the ridiculous: guys who fall from one good hit to the groin (just payback), tiger kung-fu masters (or is that karate?), and poor bastards who were defenselessly taking a nap. The music is even weirder, bringing both joy and sentimental sadness when you’re riding your bicycle around in a world full of mutants, lingerie-wearing transvestites, and a self-professed Fabio whose weak point is the bottle of dirty water you lob at his luscious blond hair.

But pain can make a monster of anyone—and turn a world that is sometimes happy and simple despite its problems wretchedly ugly. Brad, a former Joy junkie, can’t help but suffer cravings the whole game for another one of those blessed blue pills. The player must make unbearable choices for him. Take the Joy in your inventory, or let it sit there. Let your enemy kill your friend, a dumb and innocent fool named Terry, Lord of the Tutorial, or allow him to cut off your left arm. The consequences are permanent, affecting the rest of the game, but by no means are your sacrifices not in vain. Once you play Russian Roulette with your party members and learn how the world and everyone in it (including Buddy) really feels about you and your savior complex, you’re not sure whether any of your decisions were right at all.

All humans have this need

Imagine how blood-soaked Nathan Drake would seem if everyone realized just how many bodies he was leaving behind. Or Joel in The Last of Us, if Ellie learned what he had done. How would they look to us then?

Lisa has a way of allowing you to revel in a joyfulness of pain—a place and feeling where all the agony and loneliness becomes an idiotic caricature of life. I rode my bicycle down a church aisle to a funeral coffin in a vision of the future that blossomed from Brad’s own deep-seated fear, and I couldn’t help but laugh despite the gravity of it all. Other times, I felt sad. Two of the game’s worst crimes are cutting down one of the world’s last trees to make a boat and killing an obese, smiling mutant so you can take his bicycle. When bloodshed is so commonplace, murder is but a trifle offense to commit.

Perhaps great wisdom was said by a character who revered a sport that endured into the post-apocalypse: “Pro wrestling is forever,” he told me. “Even at the end of the world, it still thrives. It completely fulfills the primal need for violence and glistening bodies.

“All humans have this need. Only few are willing enough to accept it.”

Through the final battles with the dozens of people you never thought you’d kill, Buddy “is crying deeply.” It’s only a status effect, meant to reduce your accuracy. But everyone seems to be crying. No one can stop for long.