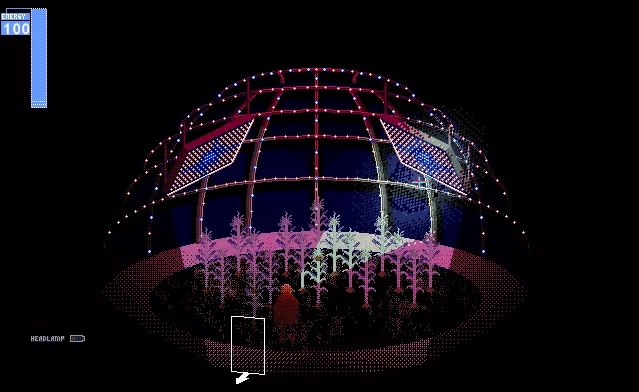 “FAIR FIGHTS ARE GOOD, IF YOU ARE IN A MOVIE, OR WOULD LIKE TO BECOME DEAD.”

This is told to me by a crystal in the middle of a desert, surrounded on all sides by dust and cacti and one single, solitary highway. It’s the third of these I’ve found, sprouting carelessly out of the cracked earth, there for no other reason than to give advice, vehemently and repeatedly. Their surreality never comes into question. Lonely Star, it seems, doesn’t like to spell things out.

I found the first crystal one map south of the demo’s introductory map, a conclave of teen collectors and budding warriors and borderline fanatics, bound together by an unreadable leader named Tom Magus and a ticking clock counting down to the end of the world. Other writers have described it as a cult, and they’re not wrong: the first few minutes, especially, just reek of charismatic sociopaths who want you to drink the Kool-Aid. That is, before the magic kicks in.

Lonely Star is intimately concerned with the details of its world

The crystals are an early symptom, but not the first. Tom Magus’s opening monologue has that honor as he sends you on a quest to gain the “magic” of fire, gifts you a key to the Underworld, and warns you not to linger too long with the dead. The quiet guitar music and flickering camp lights make this hard to digest. Isn’t this just a Western, or someone’s dead-Earth apocalypse?

Subconsciously I wait for this magic to be exposed as fiction, written off as either the ravings of a fanatic or a spiritual knowledge too amorphous to be properly grasped, settling in the ambiguity of religion. Neither happens. Instead I find crystals bursting from the ground like weeds and things much darker besides. It’s hard to explain just how quickly I panicked at the first approach of ghosts—quick and colorful and turning the rest of the world dead black, as the music goes suddenly harsh—and their only harbinger is a cloud of yellow dust chasing you across the screen. Run, lest it touch you.


The environment comes from the last few months of human existence, 2012 AD, which we’ve lived through and I can say with some certainty never looked quite like this. This sorcery, whatever it is, is from the Star—on its way back to Earth, bringing vicious things. By all accounts, it’s the end of the world. You know it, Tom Magus knows it, and I certainly know it after encountering those ghost things.

But it’s also small-scale. Lonely Star is intimately concerned with the details of its world, whether it be the way walking next to a light blinds you to the corners of the room or the certainty that, yes, you can pet every single friendly dog romping around the corners of the cornfields. The brothers who make your ghost-killing gear also collect tapes, and barter that you’ll bring back whatever lost tapes you find in exchange for a sharper machete. A farmer outside their garage calls your name, then stops himself mid-sentence: you’re on a quest, menial labor can wait. Past them, a pregnant woman leans against a wall, pondering why her fear of giving birth is stronger than her fear of the world ending. Her partner volunteers that it’s because birth is an individual responsibility, whereas the apocalypse falls on the collective; she agrees, and says she’d like to name the child Eve—clichéd but appropriate. Tom would object, she sighs, and wishes you good luck on your quest.

Lonely Star’s demo is over an hour long, and it’s impeccably polished. The lo-fi visuals are a wonderful choice for its mix of surreality and rustic America, and the music, composed by Topher Pirkl of Yellow Chord Audio, doesn’t shy away from both extremes. Were it not for flashing walls at the ends of a few maps, I wouldn’t have been able to tell that I was playing a demo. The Kickstarter, which has about a month to go, is about making the transition from “good prototype” to “good game,” but Lonely Star looks well on its way there.