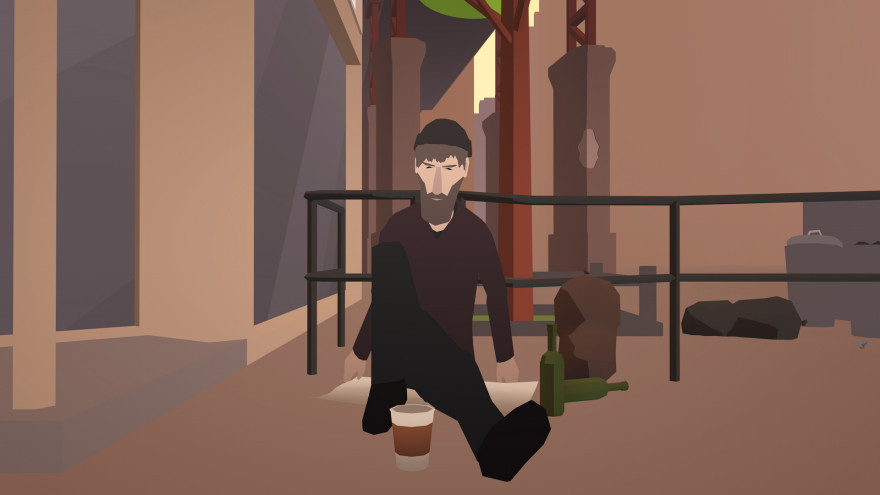 How many times have you walked past a homeless person and ignored them? It’s easier that way, isn’t it—clutch the jingling change in your pocket tight to your thigh, and then stroll stiffly by, being careful to look straight ahead. In doing this, we further exclude homelessness from our lives, hoping to push its unfortunate populace far enough from society that we don’t have to deal with it. It’s this perspective that the students who made Outcasted are trying to change.

Their method is a virtual reality game that slips you into the role of a homeless person living on the streets of a western city. It’s played from a first-person perspective, but you cannot move around the scene at all, the only possible interaction being to move your head around. From your slumped perch on the sidewalk, you can see a number of people walking past, left and right. Maintaining eye contact with them has you hold your hand out for change. Some passers-by may reciprocate by dropping coins into your palm. Many others will ignore you entirely. Then there’s the odd few who will respond only with unprovoked insults and physical violence.

The reaction of the individual pedestrians is randomized and completely unpredictable—there’s no system to figure out here. Likewise, there’s no target or goal to pursue. “It doesn’t matter how much money you achieve and you don’t get extra points for positive reactions,” says Volker Zerbe, one of Outcasted‘s designers. “You simply have to sit through the experience as long as you can take it and are willing to.” The game is endless, rolling through days and nights in an otherwise unchanging cycle.

lack of social contact and simple touching moments with other people

The lack of game components in Outcasted is a reflection of how the lives of actual homeless people are led. There’s nothing you can do to escape the situation—there isn’t a next level to progress to—and the success of your begging isn’t based on your skill, but is entirely dependent on the reactions of other people. This design is informed by one member of the team having talked to the streets’ inhabitants about their experiences. What they learned is that the feeling of exclusion was often the hardest aspect of being homeless. “Most of them were able to get the money they need to survive the day, but the lack of social contact and simple touching moments with other people often enforced their depressing situation,” Zerbe told me.

This is why Outcasted is a simulation that, first and foremost, expresses the frustration and hopelessness of social exclusion. It’s designed to drive empathy for the homeless people we see on the streets into our hearts. And to do this, the team needed to ensure that everyone who played it was as close to the subject as they could possibly be through virtual means—in this case, inhabiting them. Hence the use of the Oculus Rift and the absence of any peripherals that might be used to control the character. There are also some heartbreaking story scenes that explain the background of the character, but these are only slight. You may not be walking in their shoes but you are certainly looking through their eyes.

Outcasted‘s team is very supportive of the potential of interactive media in relaying serious topics such as homelessness. Zerbe contrasts it to other media such as books and films that can describe and show problems, whereas interactive media lets us participate and can give us a quasi first-hand experience in the feelings associated with a subject. “Right now, a lot of this interactive potential is being used for simple entertainment value,” Zerbe said. “But some of the more succesful ‘serious’ games, like Papers, Please, for example, shows the power an interactive application has in conveying more than that. Interacting also empowers you to reflect on your actions in a situation.”

the monotony and tirelessness

Having taken Outcasted to various events including the Games 4 Change Europe Conference, the Ludicous Festival in Zürich, and Gamescom 2014, the team is confident that they’ve managed to embed the message they’re trying to get across. What was notable, according to Zerbe, was how people reacted with such glee to the pedestrians that stopped and acknowledged them. Any interaction at all was its own reward. Through this, the players came to realize the monotony and tirelessness of being the person reaching out to people for loose change. It’s this that affected them the most.

“One person stated that he wasn’t able to ignore a homeless guy on his way home because the game’s topic still stuck in his head—so he had to pay attention to him,” Zerbe said. “And that’s what we want to achieve with Outcasted. We can’t simply make life easier for homeless people or prevent people getting homeless – but we can try to change other people’s views towards homeless people. Show them a glimpse how misarable this situation is and that they are still part of our society which deserve to be included and faced with the respect everyone does.”

You can find out more about Outcasted on its website.