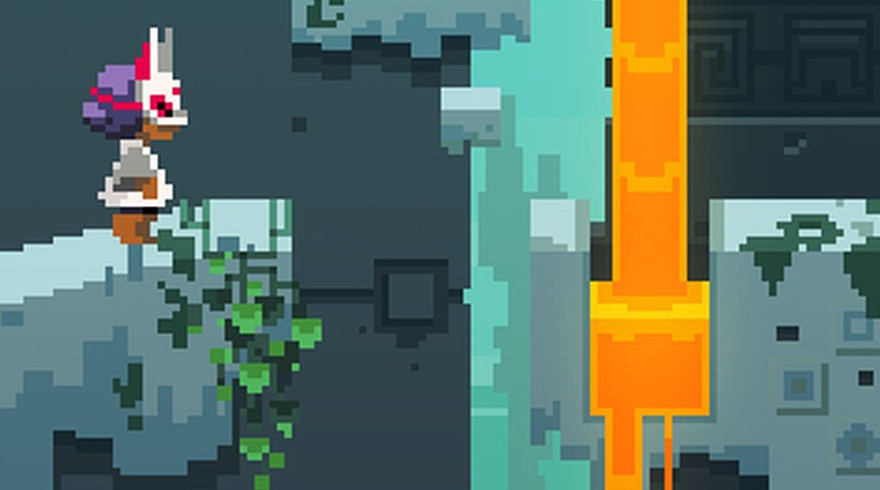 Mobile games have a problem: they don’t do platforming well. Without having a physical controller it’s difficult to move the character around and get the jumps right. For years, designers have made efforts to address this problem: they have added a digital control on the screen, have made the game on-rails so you only have to touch the screen to jump, or have divided the screen in two so when you touch each half you move the character in that direction. All of these solutions have been focusing on character motions. Nachobeard, a Spanish developer, is taking another approach with Cerulean Moon, a platforming game in which you move the scenario.

After a brief time working for larger developers, Nachobeard started making indie games in 2003 while doing some freelance work to pay the bills. After some small games, he started working on Cerulean Moon, a videogame where you move the world with your finger. “The only thing that you do in this game is slide the world left and right under the main character’s feet with your finger,” Nacho says about his game. It maintains the core features of platforming games, like exploration and tight controls, but with a fresh attempt to solve the controlling problems on mobile platforms.

Cerulean Moon was one of the projects selected for Stugan, the game incubator program that happened in the woods of Sweden between June and August of 2015. Nacho left Madrid to focus only on the game and that helped him to focus on level design aspects that he didn’t consider before. “Problems were not actually in the mechanics, but in the pacing of the levels, and in its difficulty as well,” he says. Levels in Cerulean Moon are thought of as descending dungeons, where the player has to find her way while avoiding hazards.

“nobody thought of putting the two together”

The feeling of sliding the scenario in order to advance on your own pace feels natural, and at the same time, it invites us to do it faster. Nacho thinks the game would be suitable for speedruns and he had also worked on a custom physical controller for the game when it’s played on PC: a rotary control. “The idea is if you’ve played Pong, Arcanoid or Tempest, those games all have one axis rotary control, like you just spin it clockwise or counter-clockwise,” he says. “Those platforms have existed for 20 years or more, and this type of control has existed for 30 years, but for some reason nobody thought of putting the two together.”

Cerulean Moon is aiming for an iOS and Android release in 2016, but it could also appear on PlayStation 4 and Steam using its touchpad controllers. You can follow Nacho on his development blog.