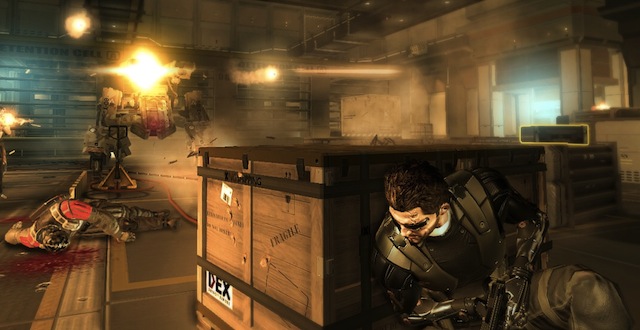 Adam Jensen is a fractured man. His mental state has been shattered like a vase that was broken by rambunctious children, and gingerly glued back together—or like the broken mirror that hangs in the bathroom of his apartment, with each shard of glass loosely held in place by the film. His condition is made known from the start of Deus Ex: Human Revolution, when a beautifully rendered depiction of Jensen forms out of triangles, and falls apart. As he sleuths through a tangled dystopian yarn, in which powerful medical corporations pull the strings, Jensen uncovers biomedical atrocities and a disturbing truth about his past. Through it all, he remains expressionless, as if experiencing genuine human emotion would cause his newly built cybernetic body to short-circuit.

Jensen isn’t exactly thrilled that he is made up of robotic parts—though he rarely lets on to it. His attitude is grudgingly fatalistic. As head of security at a cybernetic research company, he was gunned down during a terrorist takeover; an attack in which his girlfriend, a leading scientist at the lab, was targeted. Jensen was saved after undergoing major reconstructive surgery, in which he was rebuilt with machinelike limbs and computer chips: a process Deus Ex refers to as augmentation. After everything he’s been through, one can forgive him for not smiling.

Nearly every part of Jensen’s body has been modified in some way. Diagrams detail the changes on the Augmentations menu, where players can spend points to upgrade Jensen’s abilities. Upgrading his intelligence lets him get his way in conversations, and hack into computer systems without being traced. His lungs can be reinforced so that he can breathe toxic chemicals. His eyes have been replaced with prosthetics that display a map of his environment. A battery in his chest gives him energy. His heart regenerates health. One thinks he would be proud of his superhuman physique, but to the contrary, he is resentful of it. When David Sarif tells Jensen that he wants everyone to be cybernetic like him, Jensen is skeptical. “Like me?” he asks, regretfully.

Sarif is a powerful CEO of a company on the cutting edge of transhuman evolution; he’s also Jensen’s boss. He tells him where to go, what loading dock to sneak into, and whom to frame. He’s authoritarian and disingenuous. By the end of the game, he has taken to calling Jensen “son,” but Jensen begins questioning his motives long before that. When Sarif tells Jensen to break into a morgue and take a neural hub off a dead body, the player can either choose to follow orders, or confront Sarif about the ethics of it. Their relationship lures you into taking a side on the larger issue at play: Is technology something to be mistrusted, or pursued at all costs?

The complex nature of the issue suggests an indifferent world where there are no right answers, but that doesn’t mesh well with a videogame’s exact way of thinking.

The question goes deeper than a simple sense of right and wrong, even if the answers often read like a multiple-choice exam. The complex nature of the issue suggests an indifferent world where there are no right answers, but that doesn’t mesh well with a videogame’s exact way of thinking. Whether you agree with Sarif or not, you have to go to the morgue anyway. Still, your convictions influence how you approach the game. You can purchase hacking skills and spend hours breaking into empty apartments and spying on coworkers, rummaging through their desks and reading emails. The internet makes it possible for anyone’s intimate thoughts to be tapped—but shouldn’t you avert your eyes?

Other choices are less provocative, but go a long way toward making the game feel like its your own. For the most part, Deus Ex is commendable for encouraging you to role-play as Jensen. You can equip your 10mm with laser sights and a bigger clip, always keeping it at your hip, despite having an inventory full of fancier firearms. You can play the game like a jewel thief, creeping in the shadows past guards and mechs and laser alarms; you can go in with guns blazing; or be pragmatic.

The breadth of choice is only stymied by the game’s polarizing duality, as if the conflict over the value of technology somehow seeped into the structure of the game itself. The side-quests, with their ambiguous moral implications, are there for side-questing. The action segments are for, well, playing a blockbuster videogame. Early on, Jensen follows a lead from the grimy city of Detroit to Hengsha, a nocturnal district of China that could be pulled straight from the pages of a William Gibson novel. He is there to track down a hacker, but becomes ensnared in a futurist noir. It’s possible for you to completely ignore a swanky love hotel, but not likely, with the prospect of a Grand Theft Auto-inspired escapade winking in the neon lights. This pursuit opens Pandora’s box, initiating a side-quest in which a deplorable pimp forces his call girls into modifying their bodies.

Yet as soon as Jensen gets on with the main mission, the issues raised by the side-quests are dropped, and the focus changes to a straight-up action game. A cyberpunk novel set in the twisted streets of the Orient becomes a game of hide-and-seek—played by crouching behind crates and worming through ventilation shafts. Activities that come second-nature to gamers, like taking cover and bagging head-shots, take center stage. In this way, Deus Ex: Human Revolution feels divided instead of integrated; just as Jensen is conflicted about being made of mind and steel.

How much of the body can be replaced before the spirit leaves with it?

It’s too bad, because the two halves could benefit from each another. The open world lacks the tension of sneaking through a roomful of heavily armed mercenaries; the stealth segments lack the rich color of the gritty world. Still, each is fantastic in itself; the entangled human drama, and the technical arena of games. Of the two, the moody atmosphere and fictional quality is more surprising. Everyone half-expected the espionage to be good.

After all, this is a prequel to Deus Ex, the famed spy game that could be played like a first-person shooter. You might notice your heart pounding, and your left hand tightly wringing the controller, as you crawl across the room to zap a daydreaming soldier with your stun gun; or feel exhilarated when you turn a machine-gun-toting robot against its owners. When tactical maneuvers don’t go as planned, you’ll run for your life, duck into a storage closet, down an umbrella cocktail and some painkillers, and emerge firing an unwieldy rifle. Yet not all is laudable. If you’d rather keep a clean conscience and not kill anyone, eluding the patrol comes down to trial and error. I spent more time lurking inside bathroom stalls, waiting for the coast to clear after having blown my cover, than I did sneaking by security guards. And the less said about the punishing, boneheaded boss fights, the better.

Also, the plot is confusing. At times, it’s hard to keep up with who did what; and even if you did, you may find yourself not caring. That isn’t to say that the game is no good at storytelling, but rather that the best stories are the ones that emerge as you play the game, instead of the one told through cut scenes after major events. The intrigues of post-human visionaries and anti-augmentation activist leaders are less convincing than a story in which you hunt down a dealer who is giving away augmentation drugs to patients who can’t afford treatment. There is a connection between playing through a scene and being able to relate to it. It adds a trace of humanity as you unwind Deus Ex’s coils. You discover how the daily lives of ordinary people are affected as they become closer to machines. They are helpless in the face of technology. The irony is that the only thing that can save them is a man with augmented eyes and neural implants.

Jensen isn’t the only one who is apprehensive about being intertwined with wires; the whole world seems to be. Around every corner, people mull over the consequences: How much of the body can be replaced before the spirit leaves with it? The question sounds like a thought experiment, but here, it is given weight. There are riots, and the homeless gathered around barrel fires talking about mechanical hands, and a room at the end of the game where Jensen can choose one of four possible outcomes, but none of them seem like the right answer.