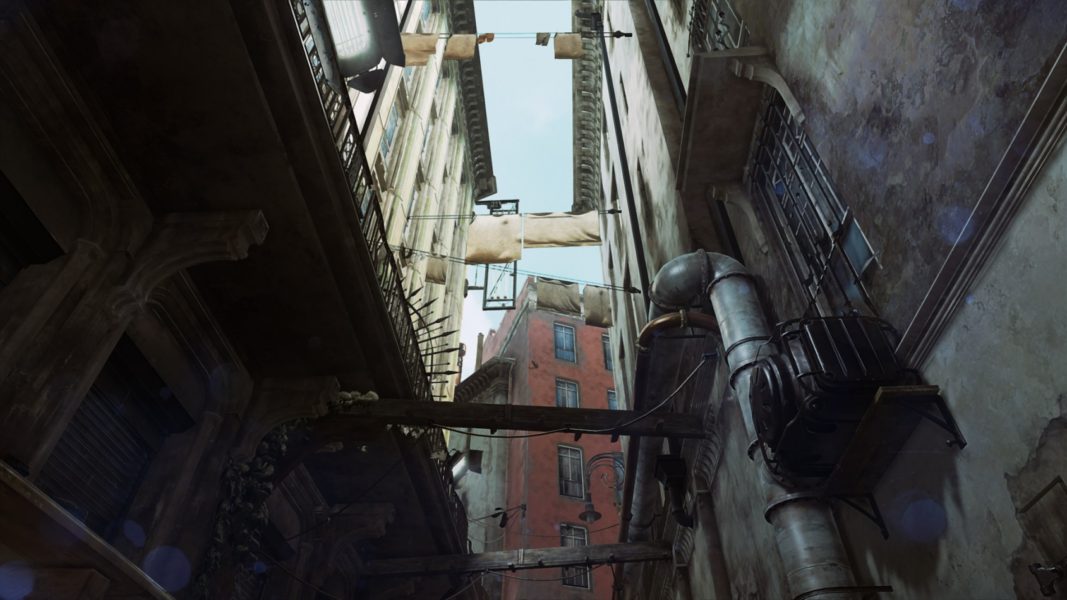 I first noticed it in the windows: their subtle, curving mullions that rise and fall like waves. Those curves lend a romantic lightness to the architecture they are set into. You might not notice them when you first set foot in Dishonored 2’s Karnaca, but you’ll surely feel them.

Like a thousand other details that litter the streets of this imagined city, Karnaca’s arches, windows, and alcoves conspire to create a distinct sense of place. They gather to form a visual map imprinted piece-by-piece in the player’s mind, as they turn the camera this way and that, down back alleys and up toward balconies, on their restless journey.

But the pieces that make up this image aren’t just fanciful shapes, picked from thin air by a designer’s idle mind; they are instead extrapolations of images and ideas that lurk all around us.

Take those curved mullions, set three quarters of the way up the sash windows of Karnaca’s sheer-faced blocks. They are an unmistakable signature of art nouveau, that total style of decoration and design whose organic forms and undulating curves flowered in the late 19th century. It’s a style that is echoed across Karnaca, from counterweighted table lamps to the strange typewriters that perch mantis-like on lacquered desks.

They are an unmistakable signature of art nouveau

Each gestures towards the focused aesthetics of art nouveau, marked by a turn away from the academic and scientific towards expressive ornament. In this turn, art nouveau architects would, for a short 30 years or so, fill their cities with curving, imaginative forms. Yet this does not describe Dishonored 2’s Karnaca. Its use of art nouveau comes alongside hints of art deco, layers of gothic revival, all amid designs cribbed from Victorian industry and colonial extravagance.

The origins of this mongrel style begin to emerge when I speak to art director Sebastien Mitton. He tells me the first city that inspired Karnaca was Los Angeles, for its “lighting and ocean atmosphere.” He also explains that others at Arkane contributed photos from their travels in Cape Town, Benares, and Gibraltar. To this collection he added his own research: “I was very interested in Havana, and did a photo trip to Barcelona which has similarities in terms of urbanism and architecture.” 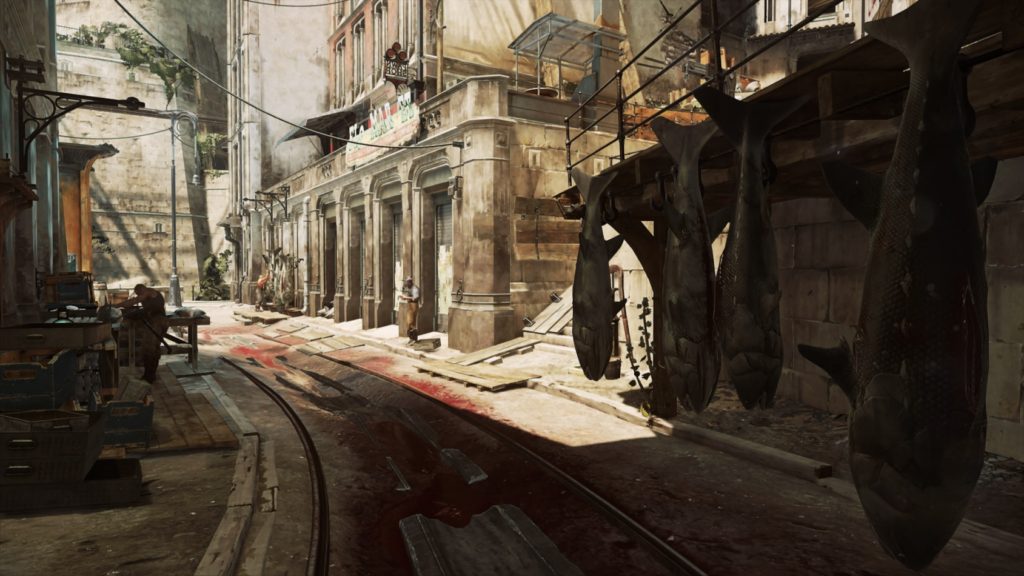 At first this might seem like an incongruous list; Cape Town, Benares, Gibraltar, Havana, Barcelona—a trip halfway around the world and back to build a single city. But Mitton explains that all these places, with the exception of Barcelona, share a key identity: that of being or having been a colony. “We investigated a lot of colonies, in different places like Australia, India, and Africa, to understand how people from the cold Dunwall climate would adapt to a warmer area.”

Dunwall, the capital city of the game’s fictional “Empire of the Isles,” and the setting for the first game in the series, is also an important point of orientation for Karnaca. Mitton describes Karnaca as the “Jewel of the South;” a “less austere” sister city to Dunwall. This relationship is finely honed in Dishonored 2’s architecture—its southern hemisphere reference points, organic ornaments, and natural materials all a massive shift from the London- and Edinburgh-inspired Dunwall and its steel-grey streets.

You only need stand in the interior of one of Karnaca’s many apartments to feel the way Dishonored 2’s architecture makes its distinctions from the salons of Dunwall. Everything in these interiors feels stretched, lifted—windows and ceilings raised to let the air flow through, to gather the ocean breezes that rise above the dust. Wooden floors, lacquered to a sheen, bounce white tropical light across lightly painted paneling. You can almost feel the thick-skinned Dunwall residents sweating in this exotic heat, hiding themselves in backrooms cooled by slatted shutters. Karnaca comes alive in these quiet moments, its precise style somehow both pointing forwards, towards a new conception of Dishonored’s world and back, to its great mother city.

It is this colonial history that shapes Karnaca as a fictional city. “I imagined different waves of settlers who slowly shaped the landmass and crafted the city themselves,” Mitton says. He explains that, in the game’s fiction, Karnaca was built by a series of colonists, from the laborers of the Celtic-inspired island of Morley, to the merchants of Gristol, Dunwall’s isle. This makes Karnaca a city constantly rebuilt in relation to a perceived home or center. The way Mitton imagines it, Karnaca’s architecture didn’t emerge exclusively from a local character, but from the interaction of established styles with the materials, restrictions, and topography of a new land.

It’s a process that explains why Mitton and his team chose Karnaca’s international architectural references. The styles and fashions the game appropriates are extrapolated in their original usage—from the capitals of Europe to their colonies—but also in their use in game, from our reality to the fictional one of the Dishonored series. Karnaca is a colony in two senses then: a colonial reinterpretation of Dunwall’s iconography but also a new, imagined melange of Western colonialism and the styles it exported to cities like Havana. These styles are, of course, recolored with fictions, reshaped by imagined political events, rebuilt by non-existent architects, but they remain traceable in each ornament.

Karnaca is a half-remembered fragment of Havana, a mirage of Benares, a sunlit flash of Barcelona, carefully orchestrated together. The process of its creation is both the gathering and the expansion of these fragments. As narrative designer Sachka Duvall told me, a great fictional city “needs to be both realistic and bigger than life.”

In this sense, it is Mitton and his team who are the vessel here. It is their trips, photographs, research, and focus that make up the pieces from which this mongrel city is constructed. Mitton says to his team that “Karnaca is their city,” that they “spent years thinking through the mind of these inhabitants” to create this exemplary piece of videogame urbanism.

But Arkane are the citizens of Karnaca in another sense as well. They are the particular holders of a kind of secret, architectural savants of the strangest kind. They are, after all, the only ones who might locate the pieces of Karnaca, distributed around the cities of the world, and identify them for what they are. An ornament here, a shutter there, the ironwork from that building in the distance; each piece now carries a little of Karnaca with it, just as the capitals of Empire were changed irreversibly by the reflections of their character that emerged, in shifting imitations, in the distant cities of the South.