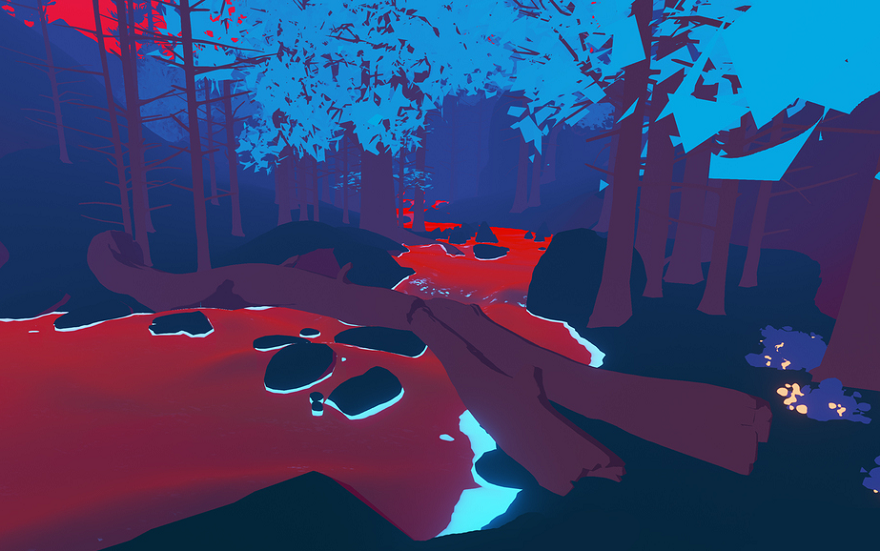 Shape of the World is Stu Maxwell’s passion project. In development since early last year, Maxwell launched a Kickstarter campaign at the beginning of the summer asking for $75,000 to help finish the game. For an entire month he and his wife, Heather, the game’s producer, spent all of their energy promoting it. “I felt like, regardless of funding, I was going to find a way to make this game,” Maxwell told me. The game would have been smaller, and taken longer to come out, but he was going to finish it, even if it meant dipping back into his personal savings.

But on June 28th the project met its funding goal, hitting $79,368 a few days later when the campaign ended. Since then the game’s creative team, Hollow Tree Games, which also includes procedural animation specialist Athomas Goldberg and sound artist Brent Silk, has been mapping out the next phase of development.

space for the player to breathe and explore

As a procedural exploration game, Shape of the World’s aims to balance the agency of the player with the authored elements of its world. “I’ve found that the design challenge of this game is to let players be free yet softly craft the pace of their experience so it stays exciting,” says Maxwell. His solution is to offer the player a goal, in this case a specific destination, but then obscure it by “transforming the environment around them and teasing them off the path.”

The end result is space for the player to breathe and explore. He likens it to a Donkey Kong Country level and the way it trains players to stray. “You’re clearly supposed to go to the right but everyone always goes left first to see if there’s anything there,” he explained. “I’m depending on this logic to get people finding little surprises sprinkled around the environment, well off the path.”

Despite the evocative minimalism of the game’s visual style, its lush transformations and naturalistic flow, breaking the mold of the modern objective-based sandbox game isn’t easy. When I asked about how people who have tried the game sometimes react, Maxwell explained that “OK, but what do you DO?” was a common refrain from people interested in the more competitive aspects of videogames.

“Players are looking for the challenge, the rules. Collect 100 coins within one minute,” he says. “And I think that’s fair; all games operate this way, though all art (in a gallery sense) doesn’t.” With Shape of the World, Maxwell wants to bridge the gap by offering players a version of a goal and reward system that’s familiar but different, and use that to “gradually lull them into the appreciation of a new kind of experience.”

“Scope reduction has always been a priority”

On the surface, Shape of the World currently revolves around “seeds” that the player collects and triangle-like gates that mark potential destinations. Maxwell sees these accessible structures as a way to facilitate less familiar experiences. In this way Shape of the World incorporates the bare-bones outline of a simple Skyrim quest, but finds true inspiration in amorphous swirl of a game like Proteus. “It banished quests altogether and focused on the core experience,” explains Maxwell. “Simple as it appears to be, Proteus actually has a high rate of pleasant surprises for its short play time. You startle as what you thought was a bush hops away from you with a sharp musical tone. You crest a hill to find a migration of fireflies who begin to surround you. You wake up to a desolate winter version of the happy place you’ve gotten used to.”

It’s moments like these that Maxwell hopes to facilitate in Shape of the World. For this to work, the game needs to feel tight and polished. “Our philosophy is to do few things but do them extremely well,” says Maxwell. Going into the game’s Kickstarter campaign having already nailed down its core design was a central to that. Now, however, the challenge is to maintain the balancing act between crafting beautiful experiences for the player to encounter and helping them to organically discover their own. “Scope reduction has always been a priority, and that has the pleasant side effect of creating something that feels focused and pure.”

Recently, Hollow Tree Games joined the Playful Oasis collective, a collaboration of like-minded developers focused on creating nature-themed games. Shape of the World will be available to demo at the second annual Bit Bash festival being held in Chicago on August 22.