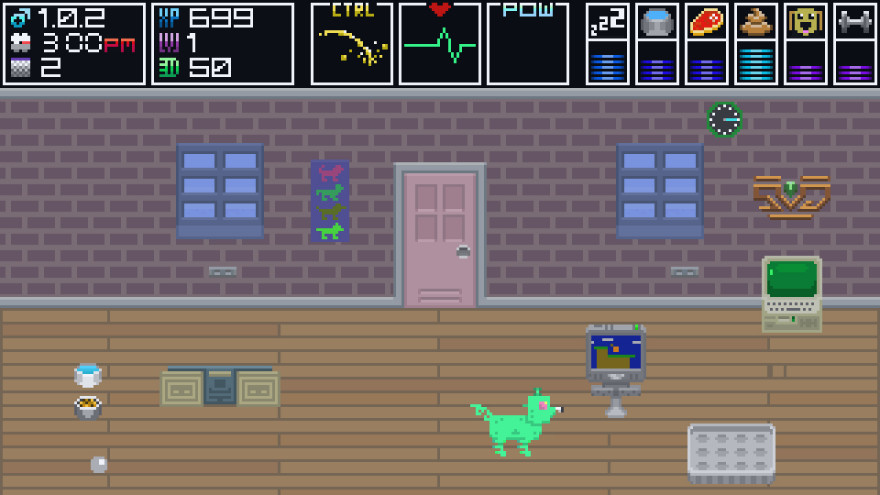 “Dogs read the world through their noses and write their history with urine.” So remarks the narrator of J.R. Ackerley’s 1956 novel-memoir My Dog Tulip, a book more committed than most to the idea that, for dogs, #1 and #2 are sentences spoken in a language we don’t understand. Tulip drops a deuce in the silence of a farmhouse bedroom; her master reads it as a cry for help, a token of nervousness and alienation. She pees on bits of food, other dogs’ poop; he sees her “endorsing these delectable things with her signature, much as we underline a book we are reading.” At one point he himself pisses on a log, and Tulip responds by adding hers to the mix. This moment is a revelation. “So I feel that if ever there were differences between us they are washed out now. I feel a proper dog.”

My Dog Tulip is a weird book; Domestic Dog Simulator is a weird game. They have little in common aside from the way they ostentatiously foreground your average dog’s heroic capacity to produce what Ackerley calls “liquids and solids”—but good Lord do they get mileage out of that. In Domestic Dog Simulator, you can do precisely three things at any given moment in your life as a randomly-generated dog. You can bark, which has zero effect on the environment around you; birds will not fly away, other dogs will not come running. You can use the contextual action button, which will do things like dig a hole or trample grass. Or you can pee, which transforms everything and provides immediate satisfaction: animals turn yellow, manhole covers flip over, transistors fizzle, the world comes alive. Above all else, pee physics appear to have been the designers’ primary focus. Nailing something small, like a butterfly, with that almighty stream is one of the few things in this game that feels rewarding; another is using your explosive poop to blow up walls or cars.

Although it gets its pixelated, deliberately grungy aesthetic from Atari 2600 simulations, Domestic Dog plays more like a rudimentary Zelda in which there is no quest, no princess, and no discernible point. At the northwest corner of the map you’ll find the Lost Woods, but what do you get if you reach the end? Not the Master Sword but one of the squirrels that hangs out around it—a squirrel that goes to live in your house. And that’s assuming you haven’t died yet. The game has five meters (food, water, fitness, happiness, poop) that tick down and down with every passing second; you can refill them individually, but it’s only a matter of time before the entropy of dog life gets out of hand. Even before that, you’re probably going to get hit by a car. 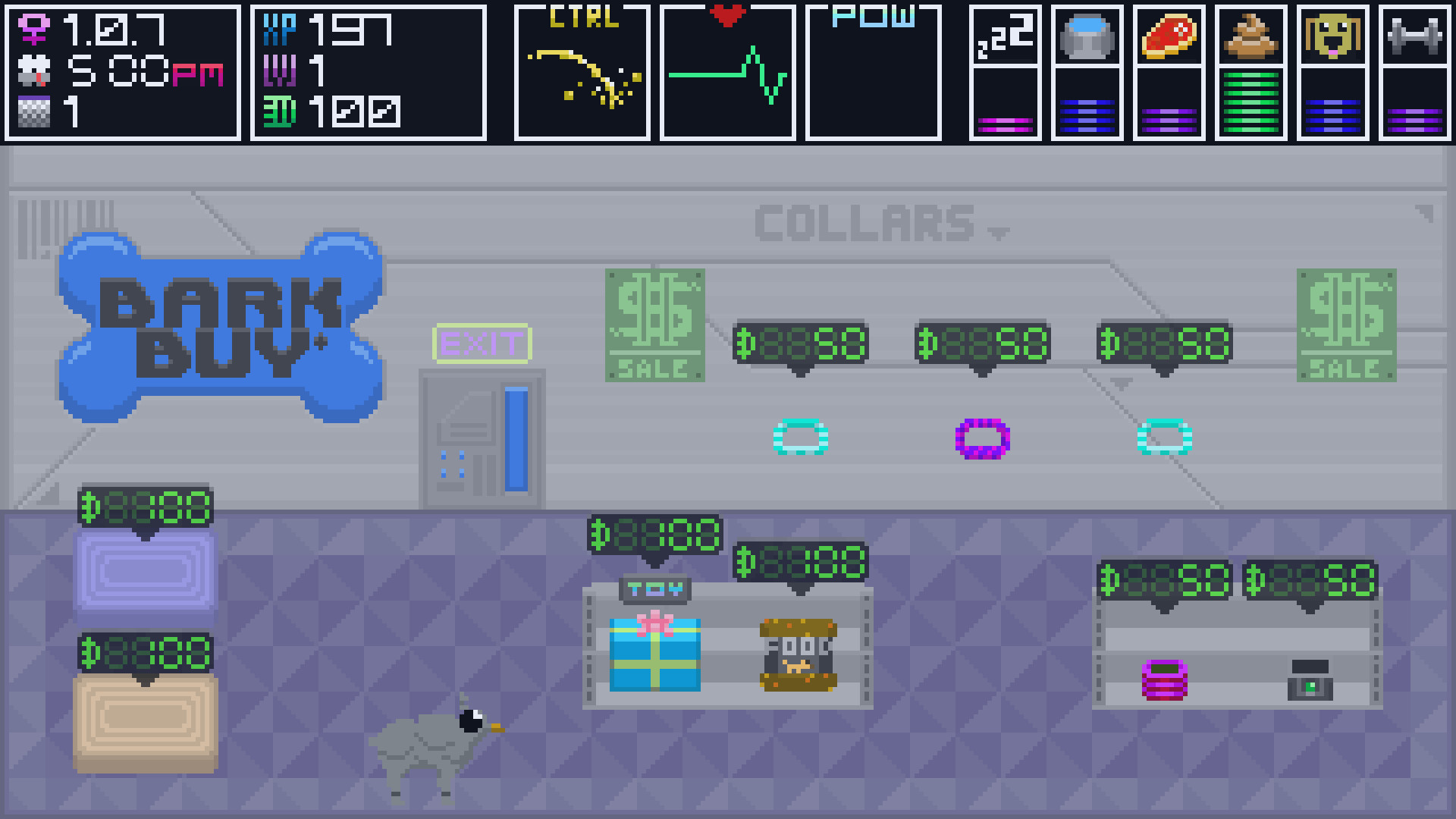 The game is one of those non or anti-games like Goat Simulator or I am Bread, which means it carries with it a sense of incompleteness. Yes, it is what it is (and it is what the name of its developer promises: a Surreal Distraction), but in order for it to work as an enjoyable aesthetic experience, it requires a whole overlay of mental effort and interpretation on the part of the player. No doubt it’s already achieved comic sublimity on YouTube. For the average player, it works best if you make your own challenges—like shepherding all the sheep into the pen, or buying a new flatscreen before you die, or crossing the field without getting your dog bucks stolen by godforsaken raccoons—and look at the game, and yourself playing it, from a healthy ironic distance. Even writing about it makes me feel like I’m part of some sort of problem, just feeding into the ironic commentary life-support system that allows a game like this to become more than the paltry sum of its rudimentary parts. Then again, what’s strange about Domestic Dog Simulator is that it retains this feeling of pointlessness and incompleteness endemic to the anti-game even though, in a lot of ways, it fits into a recognizable and metaphorically potent game genre. Domestic Dog Simulator is essentially a roguelike. You get as far as you can in this hostile world until it catches up to you. And then, in an instant, you’re a new dog in a new house, hatching from an egg. You, not the world, are randomly generated. Isn’t that a pretty good metaphor for the life of a domestic dog?

As its title suggests, My Dog Tulip is not a domestic dog simulator: it’s a book about a man’s attempts to take care of his dog rather than an account of what it’s like to be that dog from her perspective. Other works of fiction, from Paul Auster’s Timbuktu all the way back to the “it-narratives” of the 18th century (which resemble our anti-games in several ways: we should all be waiting for game adaptations of The Sofa: A Moral Tale or The Secret History of an Old Shoe), have tried the whole dog’s-eye-view thing; but this one stays firmly grounded in the human first-person. At the same time, it fidgets in the seat of that subject position. The narrator’s constant monologue takes us in a lot of directions that remind us of the vast gap between these two titles—the problematic fact that a novel-memoir named My Dog Tulip can never be a domestic dog simulator in any meaningful sense.

Beneath the narrative lies a metadrama about narrative itself: the man constantly tries to organize his dog’s life into a chronology that extends beyond momentary impulses (to chase another dog) and daily needs (to poop). He thinks of Tulip as a lady with a life that has milestones: childhood, adolescence, losing her virginity, becoming a mother, living in comfortable retirement once the puppies are raised. Seeing, and often engineering, her sexual encounters with suitors across the socioeconomic spectrum—purebred Alsatians who look and act like butlers; scrappy mutts from the streets—he imagines her sex life as a farce worthy of Downton Abbey. He assumes her experience of time is arranged into past, present, and future, like his own. At the same time, he becomes increasingly aware that, as the scholar Gillian Beer once put it, “language is anthropomorphic by its nature and anthropocentric in its assumptions.” The kind of story he tells about her is nothing like the kind of story she tells with her urine.

Can you tell a story with urine in Domestic Dog Simulator? You can leave traces, before the game wipes them away. But I think what’s more significant about the game is that it isn’t a story at all (as the flirtation with Zelda, that elemental story-of-stories, might indicate): the model is iterative, not narrative, and the focus is on a species, not an individual. And the game is also crystal-clear about its basic metaphoricity, reminding us constantly that what we’re playing is something dog-like, something that tries to represent doghood through the projection of a recognizably human structure. Everything is a dog pun of some kind, from Pupsi to the arcade cabinet where you can play Dig-Dog; the whole game is one giant attempt to substitute the “rogue” in roguelike with “dog.” Games have tried to be dog simulators before: in 1995, we had Dogz; in 2005, we had Nintendogs. Both were arguably much better at doing what they advertised. But this dog simulator of 2015 is a different beast entirely, perhaps for a different time; it cares much more about sustaining self-irony than making a good-faith attempt at realism. In it we might see the specter of Ackerley’s self-ironizing narrator, obsessing over urine because he knows the limitations of his own perspective. Or we might see something else—because, like dogs themselves, the game begs for an interpretation even when it’s taking a shit.