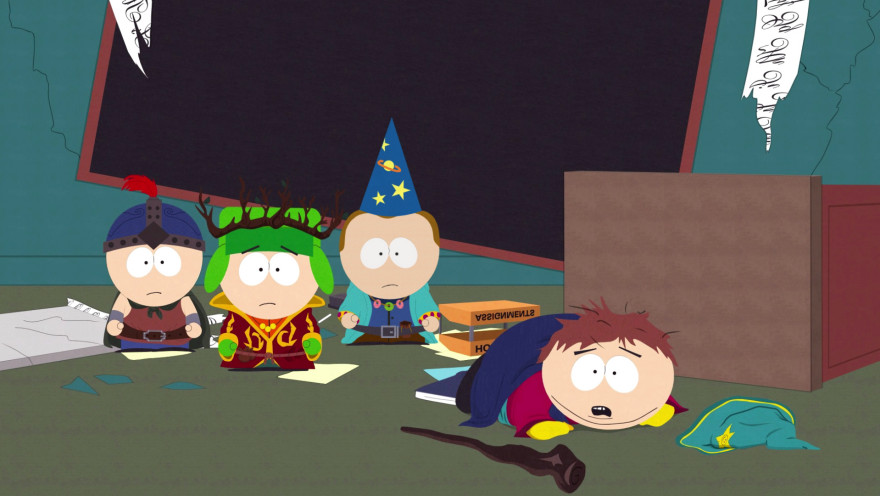 “People just freak out over elves and all that crazy nerd stuff, don’t they? They go absolutely batshit for elves,” my cab driver says as we course and wind along a raised circle highway into Boston.

We had just passed a massive billboard for The Hobbit: The Desolation of Smaug. I’d launched, with no shame, into an unasked-for lecture on the film’s demerits compared to the Lord of the Rings trilogy. Opus canvassed in full; original texts considered as real source material.

Catching his narrowed, (hopefully) bemused eyes in the rearview gives me some pause. “I’m really not into fantasy worlds,” I demurred. “I mean, the Desolation of Smaug? Come on.”

“Oh, I’m not judging hobbits,” he said, smiling. “I like those movies. And Harry Potter and all that. They’re fun. I mean, they know what they are doing. They’re making money.”

They do know what they are doing. And Trey Parker and Matt Stone know what they are doing. South Park: The Stick of Truth is a consistently obscene amount of fun, and there are elves, a whole army of child elves. More importantly, it offers what anyone immersed in gaming culture knows the industry needs: a more vigorous, healthy sense of humor about itself. The game can demonstrate to a gamer how incredibly puerile and absurd her beloved and frustrating culture can be, while also protecting the imagination, ingenuity and flexibility that keep games so alive and self-generating and dynamic and delightful—and seemingly endless as a medium.

The Stick of Truth celebrates both of these elements, balancing the joy of being a young boy in an obscene universe, just playing with his friends, while teasing our awareness of playing a game at every turn. I learn that my character, Douchebag, and his family, have moved to the infamous quiet mountain town. I style a boy in argyle with glasses and slight bags under his eyes, with chocolatey skin. I then pick a warrior (“Learn the ways of the warrior and let this helm guide you down the path of problem solving through violence,” I read).

Cartman quips, “Black fighter, huh? Pretty scary.” I learn that “for a thousand years a battle has been waged” and begin to chuckle, setting off a chain of chuckles that will echo throughout my play.

I never could really watch the first seasons of South Park, because my parents thought it disgusting, as they should have. Don’t laugh at this, my mom would say when I found a way to flip quickly to an episode, then back to My So-Called Life. Today, we hear, “Have you seen the new South Park making fun of [some enormous cultural or political event]?” And the door to open season laughing about that cultural event is opened, reified and cycled back into the culture.

South Park’s pillorying is so perfect and effective that one can imagine a South Park episode making fun of videogame critics sitting around earnestly discussing the merits of the South Park game and how one can’t play as a girl and the puerile humor and small glitches and perceived minor flaws in the sometimes repetitive combat system. Maybe they would end in lamenting the state of the games industry, typing furiously on comment threads as the yellow paper sun rises and falls and rises again over the town they sit in. We are, sometimes, as a group, kind of lame.

Stick of Truth’s deadpan send-ups of simplistic Recycled Fantasy Nerd  tropes—from elven petulance to paladins dancing about to lyres to longswords to the world, you know, just splitting along equal parts good and dark—make me think hard on how many times I’ve watched the same battles. The tropes are all some variation on self-serious preparation for earnest questing—which is the same story I used to play as a child.

Every narrative line of fantasy conceivable is mocked to death here. Whether Game of Thrones or Star Trek or Lord of the Rings or Battlestar Galactica or Star Wars or some other million-dollar world, the tropes are easily replicable. I think about all the franchises we (collectively) spend considerable portions of our lives freaking out over—absorbing plots, reading books, discussing merits of dragon and royal family lineages, arguing with others over finer points of backstory.

“We’re not druids, Mom! We’re fucking warriors and wizards!” Flailing against the night, and his crackhead mother’s incompetence, Cartman’s protest is the heart of the gamer’s lament, young and grown. Stop mixing my genres! Take my escapist narrative seriously! It’s not just a game! “Sorry, Frodo. We don’t play Dungeons and Douchebags,” says the curly haired leader of the Goths, tossing my request that they play with us to the ground.

In the background as I’m cutting through a sewer searching for Mr. Hankey’s children, I hear an advertisement on the television for Diablo III: Reaper of Souls:

“No One Can Stop…Death…(Pre-order now for your Wings of Valor).”

That South Park effortlessly replicates and mocks and turns out fantasy game writing  (or what it sounds like to most folks; take Cartman in the opening, asking, “Could it be that the Dragonborne has come in our hour of need?”) makes me embarrassed for the medium. It also makes me convinced of how much more there is to be done.

I click on a Help Menu to read about Basic Interactions, and find:

“The world of South Park is a rich, vibrant and beautiful place full of adventure and poop jokes. Many different objects in the world can be interacted with in interesting ways by pressing X.”

Elsewhere, a Hobo complains about listening to every single audiotape, poking at game completionists: “For some reason, I listened to every minute of every one of them thinking there’d be some useful information, but it’s like they’re just FILLER!”

Where some games are rife with filler, The Stick of Truth has a delightful glut of productive activity. Brief interludes of dialogue and quips turn quickly over to increasingly difficult, precision-based fight scenes. My enemies, with their eggshell eyes, all cause intense damage and prove quite hard to defeat. I’m playing Dark Souls II alongside it, and its baroque bosses stand in amusing contrast to the difficult paper cut-out ones of South Park.

What does it feel like to act in a familiar universe? Playing feels like being caught right in a series of authentic South Park episodes. I felt voyeuristic  getting to walk around the spaces so nicely rendered to respect the television show. There is an initial dissonance in being able to shoot down the props, furniture and walls of South Park Elementary and the houses of Cartman, Kenny (on the literal other side of the tracks) and Butters—houses, let’s assume, that we’ve been familiar with for years. Each object has use and each action feels useful.

The player is continually reminded that she is playing a videogame; there is rarely a moment in which you’re not aware of how hilarious it is to claim to be a gamer, to participate in these systems,  to isolate oneself from real people in order to be in digital worlds. There’s the swell of epic, LOTR–worthy questing music, with a pan flute and chorus of serious “Ah! Ah!” voices, then mixed with Cartman’s voice countering, “Ah! Ah!”

There’s also fluid movement back and forth across the third wall here, with Cartman, The Grand Wizard, frequently breaking it with his commentary: “Don’t talk to her—she’s not part of the game!” or “I’m not dead, you can’t loot me yet!”

We have, here, the absurdity of games in great, precise relief.  You spent 76 hours leveling up your mage? Wow. Well, it is what it is. I have to get going, though.

Taking a ride through the South Park universe, running into old friends like Tweek and Al Gore and Mr. Hankey, I’m also walking through my own past, learning about this world. I long thought it ugly, strange and unsavory to look at; I became more and more appreciative in college. In recent years, I became a full-blown champion.  As we run into every major reference from the series, I think about how long Butters (the Merciful) has been an actual psychological comfort to me, how long I have been listening to Cartman’s angry mewling.

With each in-joke from the universe washing over me in a warm wave, no matter how disgusting or offensive, I realize how I’ve slowly been inured and desensitized, generally, over the course of fourteen years. Then I am thinking of my childhood, and imagination and the stories I would tell with my friends. There was a time I didn’t know about Mr. Slave, or more specifically, why what he enjoys could be funny. There was a time I didn’t know what Cartman’s mom does in her free time.

There was a time, there was a time, I had never imagined the possibility of battling a phallic mouse on a computer, but I—we—can never have those days back again. We have to forge on into the filth.

The honesty and reliable truth of imaginative play.

And all you need, this game seems to be reiterating, to really play, is a stick, a cape, a twig crown, and a hell of a lot of imagination. And the great outdoors. And your neighborhood. The play world of the boys on their many quests is pretty magical. Candles, empty soda bottles, a whole mess of domestic detritus arranged to make a magic world. The floor can be made of fire; the dingy basement, a forgotten land. The honesty and reliable truth of imaginative play—that is what I felt most truly playing in this hilarious and unremitting game.

And back then, between bookshelves on their sides, pillows and blanket forts, we were knees and elbows on the rug  in a crawl along a lava lake. Excelsior! We broke into heated debate over what my weapon—a cup with Sony headphones wrapped around it—could do. Leah’s changed the story, again, and suddenly she’s the queen, and is standing magisterially on the couch above us.

Darkness is falling! The hounds will come yet. Winter, too. It’s coming, too. In an hour I will need to go up for dinner, and then, Tessa, Leah and Amy will have to go home. But they will be back next weekend, and the weekends stretch as far off as we can see.