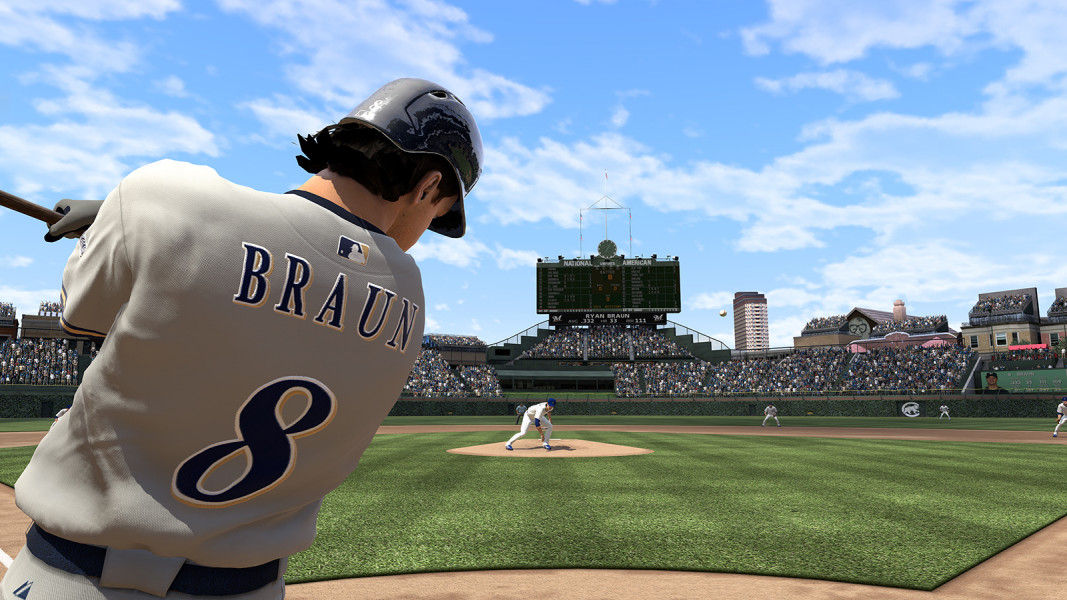 It’s two a.m. on a Thursday. I have a few articles to write tomorrow morning before I head off to my afternoon job tutoring students in English and Math, so I’m trying to get a good night’s sleep. I can’t sleep, though. I’m staring at the ceiling, listening to the hum of traffic outside. I keep replaying a scene in my head from earlier in the day:

I caught a fly ball in center field and had a clear line to throw home and catch the guy tagging up from third. My throw sailed wide right though, the runner sliding in to home and scoring what turned out to be the winning run. I kept running it over in my head, and when I wasn’t, I was fretting about how my mediocre batting average was going to affect my contract negotiations with MLB clubs in the summer. And by “my batting average” and “my throw” and “I caught” I’m referring to the actions of my digital lookalike in MLB ’13: The Show on Playstation 3. At some point during my past 10 or so years of avidly playing sports games, I have taken on the anxieties of a pro athlete. This is disconcerting.

While it isn’t always the case, one marker of quality in certain types of videogames tends to be how “real” the game feels and looks. Typically, this doesn’t have much to do with historical or narrative accuracy; after all, it’s not like the average citizen is going to know what it’s like to steal a car, pull off a jewel heist and then play some midnight tennis with their surprisingly chipper, considering the hour, wife. Instead, the realness of a game comes from its ability to make us feel something, to provide our brain with images that then fire synapses that make us feel joy, anxiety or triumph. Many, if not most sports games, especially in recent years and with the technology of the next-gen consoles, have built and marketed themselves around their ability to recreate reality.

These aren’t the days of Blades of Steel when you dangled a few defensemen, scored a goal and then on your next shift bumped into a guy three times before dropping the mitts. Today, you have contract negotiations, sponsorship deals, Twitter challenges, GM meetings and in-game performance goals. Often, your player (assuming you’re playing one of the many MyPro/MyCareer type of game modes) is graded or awarded skill points after each game, followed by a press conference where you answer a question like an automaton and then see your popularity dwindle or improve. These post-game performance reviews don’t necessarily influence the game in any major way, but they start to bleed into our own lives at a certain point. We aren’t fulfilling a fantasy; we’re working a job.

The realness of these games, and the anxiety they potentially induce, isn’t solely a byproduct of the extra features; the fundamentals of the game are at fault as well. I can’t count the number of times I’ve missed an easy layup, or have watched as my shortstop has allowed a simple groundball to go through his legs á la Bill Buckner, or mashed buttons just hoping that my goalie will COVER THE DAMN PUCK! Often, the failure of your player is by design.

After all, every sport thrives on narrative, and specifically a narrative of overcoming obstacles. This is why in just about every major sports game on the market you start out as an amatuer—in the EA Sports NHL franchise, you can start your career in the OHL and AHL; with MLB: The Show’s “Road to the Show” feature, you start out as a horrifically underskilled minor league player. These games set out to portray all the drama of being a professional athlete, from working your way up to the big leagues to signing your first contract and making your first all-star team.

The market may be ever growing but we’re winnowing the experience down to a single, and singularly complex, one.

The logic suggests that for these milestones to truly feel earned, you need to be significantly challenged, and therefore failure is part of the game’s design. Toiling away in the minors hoping that some faux-GM notices your immense stick handling abilities can be immensely frustrating though. We’ve fallen into an uncanny valley of verisimilitude, where sports games are too close to the real thing. Their complexity potentially dissuades newcomers from playing and dedicating themselves to a franchise while also alienating current devotees by continually upping the difficulty in the name of realism. The market may be ever growing but we’re winnowing the experience down to a single, and singularly complex, one.

Perhaps the reason this complexity and realism is an issue in sports games specifically is that fans are already bombarded with the drama of sports on a minute-to-minute basis. We already get to experience every single dramatic moment—from the joy of our team winning to the uncontrollable weeping when a star player goes down with a torn ACL—several times: first streaming live, then on Twitter, on a news site, on a 24-hour network, in a thinkpiece the next day, on a leisurely debate that weekend. We already have to deal with Skip Bayless. We don’t need sports games to represent every miniscule detail of reality because we’re oversaturated with them as it is.

With the release of MLB ’14: The Show pending, a game that will certainly continue with the franchise’s tradition of providing complex and frustrating “reality,” it’s time to redefine what makes a sports game great and worth our hours of playing time. Realism is certainly something to value—I still get giddy seeing hyper-specific NBA arenas or the recognizable face of Jose Bautista—but at a certain point, the details bog down the gameplay, and what’s meant to be fun morphs into a chore. It’s time for sports games to restore the balance between the ludicrous gameplay of something like NFL Blitz and the realism of NHL ‘14, because us sports fans can’t afford to lose any more sleep.