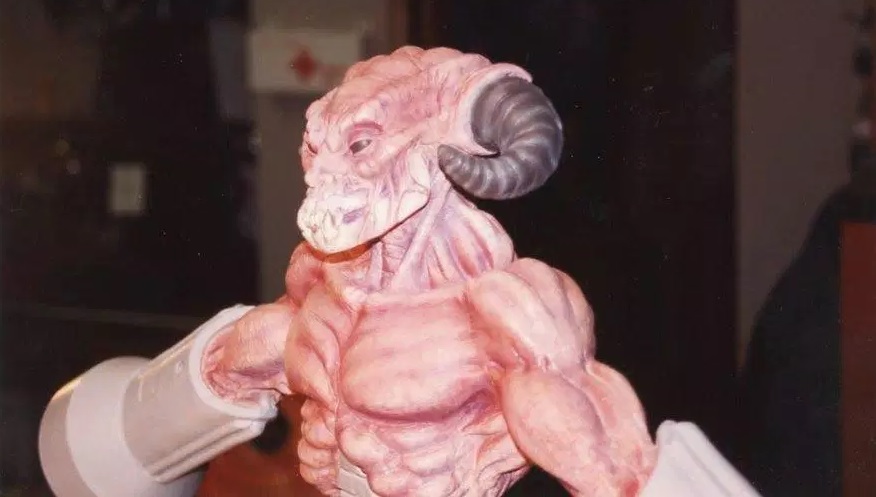 DOOM (1993) is known for its hellish bravura and the legacy that followed. On the surface, we tend to think of big pink demon muscles, gnashing jaws, and bloodied grimaces. It’s a stern-faced brute that would be quicker to punch you in the mouth than hold a conversation. Somehow, that aura surrounds the game even today, 20-odd years after it was originally released. But we’re told that all hard-nosed giants have a soft side, and that is at least true for DOOM, as all you have to do is wind back the years to before it came out, to DOOM‘s somewhat goofy-looking production.

I’m talking about the fact that the demons in DOOM were conceived as physical models before they became in-game sprites. They sat on wooden surfaces around the id Software offices like grouchy icons straight from hell. This has been widely known among DOOM fanatics for a while. But the full story behind it has recently been laid out in a Develop Online interview with the man behind some of those models, Greg Punchatz.

The first round of maquettes were made by id Software artist Adrian Carmack. The reason being that the models allowed for the look of DOOM‘s cast of enemies to be more easily upgraded when compared to the team’s previous first-person shooter, Wolfenstein 3D (1992). The idea was to outdo that game in every respect, and scanning in stills of these sculptures (rather than hand-drawing sprites) meant that DOOM could have more intricate in-game models—something that might actually look scary—as well as incorporate stop-motion movement, which was far superior to any of the early 3D animation possible with the computers the team had at the time.

Punchatz was introduced to DOOM and its team by his uncle, artist Don Ivan Punchatz, who created the memorable box cover art and the DOOM logo. By this time, Punchatz (Greg, that is) had already created sculptures for A Nightmare on Elm Street 2 (1986), RoboCop (1987), and Coming to America (1988). He was a professional model maker with an impressive history behind him, yet it seems that DOOM excited him to a new degree, saying that he was blown away when he first saw the game in action. At first, Punchatz was brought on to specifically design and craft DOOM‘s gross-looking Spider Mastermind—a giant brain with a menacing face, hoisted on a large cybernetic chassis with four mechanical legs, and armed with a chaingun. It was to be the final boss in the last episode of DOOM and the game’s toughest enemy. It had to look the part.

there’s a timeless appeal in this style of production

Punchatz was told to make it “scary but over-the-top,” yet resorted to using what he describes as “rubber band and chewing gum effects.” By this, he means that the parts he used to craft the model were found as scrap and in hardware stores: bits of Tupperware, PVC pipes, a steel armature, and a plaster mold for the body. When it was assembled, the Spider Mastermind then went through another relatively cheap process, it being patched together by individual frame grabs from a video camera feed, then fed into a program called Fuzzy Pumper Palette Shop to turn the 24-bit color image into a 256-color VGA graphic. This was then all cleaned up with a paint program and turned into a sprite to be inserted into the game by artists.

Punchatz says he was disappointed to see his work transformed into such a low-res form. The finer details he had put into the model didn’t come through much in the final game. However, that his work was part of DOOM at all was enough gratification for him. And so he went on to create more complex models of the Arch-Vile, Mancubus, Revenant, and Pinky demons for DOOM‘s sequels. Learning about all of this now, that one of the most advanced techniques in videogames was once using stop-motion and physical models, comes across as a quaint tale. You can add to that the fact that DOOM‘s guns were modeled on actual toy guns. Yet there’s a timeless appeal in this style of production that perhaps we understand more now than we might have before.

It’s the equivalent of looking back and appreciating Ray Harryhausen’s stop-motion animation in a number of fantasy movies across the 1950s and 1960s. Yes, it’s very dated, but that doesn’t take away the technical mastery, the handcrafted horror of these beasts is still there in the moving rubber parts and animated plastics. But it can be more than just a distant appreciation that returns us to the achievement of these antiquated productions. It may be that we’re beginning to foster a preference for physical models and stop-motion used in both films and games over the standardized digital methods of today. Lumino City‘s (2014) model city made of wood, miniature lights, and electric motors taps into this. The hand-drawn worlds and hobbling claymation people of Jack King-Spooner’s games (Blues for Mittavinda (2013), Sluggish Morss (2013), and the upcoming Dujanah especially) does also. Each example having a tangibility to them, a delightful realness that doesn’t come through as much in digital production, only possible due to the interaction between a maker’s hand and the putty that they shape. We crave that human touch.

On a wider scale, this July will see the arrival of Godzilla Resurgence; a reboot of the series from Japan that uses a three-man Godzilla suit and, it is suggested, might feature a stop-motion battle. While this return to practical effects might be seen as an attempt at being silly or an effort to stand out in today’s crowded media markets, it is in fact totally genuine. And it seems there are plenty of people, myself included, who want to watch a cinematic creature that doesn’t have that odd CGI sheen embalming it for once. The attitude carrying this appeal is one of preferring actual plastic to the fake plastic of computer graphics. It seems that director Peter Jackson was right when when saying the following in the 2011 documentary Ray Harryhausen: Special Effects Titan: “There comes a point where people will reject digital effects and want movies where we actually did something in real space, and real time.” It seems we may already be approaching it.

You can read the full interview with Greg Punchatz over on Develop.