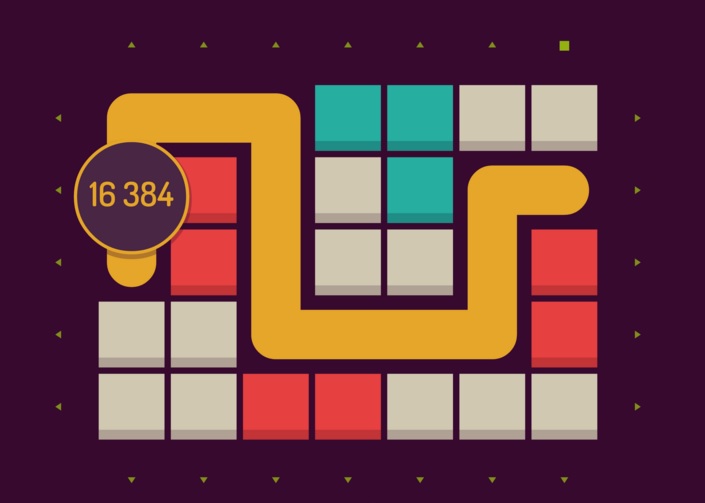 Who is this fumbling little alien? Looking like the offspring of Kang and Kodos, cyclopean and tentacled, working some dead-end 9-to-5. In space, nonetheless. And without a clue. No, really, who are you little dude?

This alien’s job is to not know anything. It’s a tutorial alien that is stupefied by me as I work out how to play twofold inc. That’s right: inc. I’m working for a company in this game. Or, at least, this alien is supposed to be. But I’m doing its job for it. I suppose that’s fine. I mean, I don’t mind, not with the bleeps of this game, the shudders it sends across the screen as I score points. If all work was made with the type of chunky feedback I’m getting right now I would not stop to sleep, not voluntarily. Let me pull pints that ripple the bar. Let us enact transactions with body punches.

the shudders it sends across the screen

Alright, so what is my job here? I have to match adjacent tiles of the same color to fulfil each “request” as it comes in. The request is always a number tied to a color—a complete abstraction of units (what are we making and selling in this place anyway?). Except it’s not just one but several colors, and the requests never stop coming in. Yes, this is factory work. And yes, perhaps it does sound similar to the mega-hit mobile puzzler Threes!. But this ain’t Threes!, bud; there’s no flick of the finger here.

In twofold inc. you have to drag your finger across the tiles to connect them, making chains. As long as you can make a continuous line through each tile in that same-colored cluster, without having to turn back on the path you’ve carved, you will see all those tiles pop into points. And, oh, I’ve just realized… ha, this sounds like the puzzles in The Witness now, doesn’t it? Drawing non-stop lines on a grid? Yeah, okay, it’s similar to that I guess, but only in practice—there are no ciphers here, no greater mystery. It’s you and a daft alien filing away colors and getting a buzz from the after-effects.

matching tiles rarely feels as good as this

In fact, I’m struggling to discern if there is much strategy to twofold inc. at all. Let’s go back to that comparison to Threes!, because in that game you were able to sorta see what tiles would enter the grid to replace the ones you’ve matched ahead of time. You could learn to work with this, plan ahead, there was some analog semblance of strategy—a way to organize the tiles on the grid to your benefit. In twofold inc. it seems you cannot do this to quite the same extent as the tiles you remove are replaced en masse with a random selection. Colors rain down onto your grid as if it were a Skittles advert. As this is the case, you can feel a bit hopeless as your attempts to shuffle the grid to match up the colors can be spoiled so easily. Luckily, the grid is much larger than the one in Threes!, so there’s more room to maneuver inside.

This doesn’t necessarily make twofold inc. worse than Threes!, but it does lend to failure feeling more up to the whim of chance than your own lack of strategy. The space for you to improve within feels smaller. Having said that, you do get a chance to place tiles in the grid yourself, replacing ones that are useless to you—you start with a replacement tile of each color, but can (I think) create more through play. And, admittedly, I haven’t played twofold inc. anywhere near as much as I have Threes!, and it took me a little while to understand how to make use of all the data Threes! gives to my advantage. Maybe there’s parts of twofold inc. I’m missing that inform strategy in the same way but I don’t feel confident in that being the case.

But, heck, I’ll keep playing twofold inc. if only to drink up all the impact of scoring points that it rattles through my iPad. Does that make me an endorphin junkie? Perhaps. But matching tiles rarely feels as good as this, that is, about as punchy as shooting a big-ass gun in a shoot-’em-up. And creator Grapefrukt has once again delivered on the graphic design here, as he did previously with his meditative space strategy game rymdkapsel. It seems his vision of space is one of rigid blocks in full color. He really knows how to deliver on that geometric simplicity. Oh, and now there’s a little alien dude in the Grapefrukt expanded universe, too, I guess. That nitwit.

You can purchase twofold inc. on the App Store and Google Play. Find out more on its website.