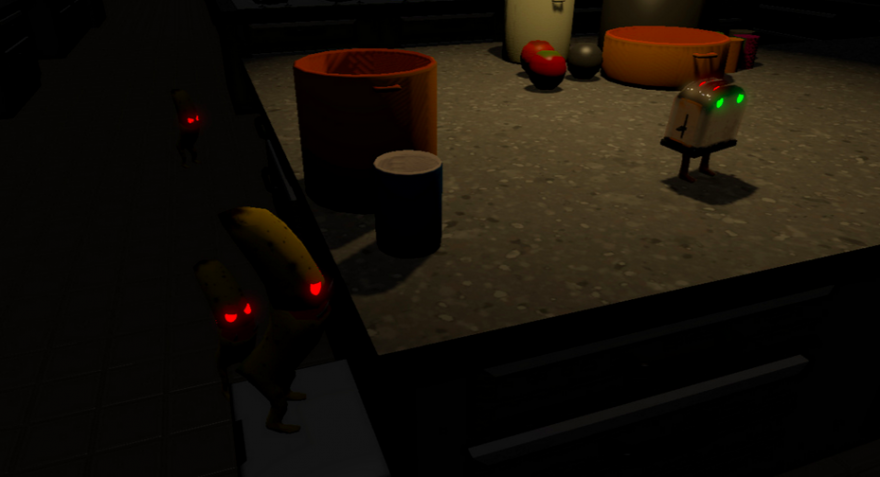 If there is a hell for electric toasters—or humans, for that matter— it is obviously an artisanal toast bar, the kind of place where artisanal butter comes with sea salt on the side lest you find yourself unable to control the salinity of your bread topping. Andrew Wang’s Lullaby for an Electric Toaster suggests that there is a fate almost as excruciating for toasters: running around a darkened kitchen filled with demonic bananas.

Although Wang created his game for the Let’s Cook Jam, it’s unlikely to help you work up an appetite. You play as an electric toaster—the traditional stainless steel model with two slots at the top, none of that toaster oven bullshit—that finds itself perched atop a counter. Tinkling piano music plays in the background, though in this context it sounds sinister. Two small lights on the front of your toaster provide a minute field of vision. There are glow-in-the-dark messages written on surfaces and arrows pointing the way forward. You follow the arrows even though they look like a serial killer drew them. What other choice do you really have?

In fairness, you do have the choice to fall off the counter, but I wouldn’t recommend it. There are bananas lurking about the floor, just waiting to kill you. How the hell does a banana kill a toaster? Who the hell knows, but they do and this isn’t a game about science. Thus, your best option is to jump from counter to counter and try to forestall death. Your other option is to fire toast into the air. It burns bright and illuminates the room with a glow reminiscent of the shock-and-awe footage from the run-up to America’s invasion of Iraq. For all the fun that can be had launching toast, it’s best to stay on the countertop.

In the 1987 animated musical comedy The Brave Little Toaster, a toaster leads its fellow appliances on their search to rejoin their former owner. It’s toy story with more singing and less charm. I like to think of Lullaby for an Electric Toaster as a postscript to that film, a heavy metal reminder that sometimes you don’t get what you want. Life in the big kitchen isn’t all it’s cracked up to be, but at least it’s better than life in a toast bar.

You can download Lullaby for an Electric Toaster for free on Game Jolt.