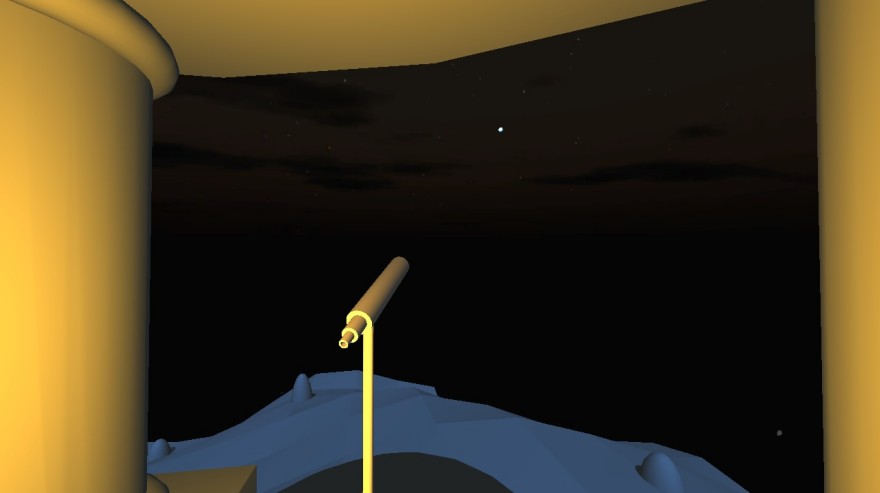 “I like that in 2D jRPGs house interiors are surrounded by this immense black void.” – Stephen Murphy, a.k.a. thecatamites

Out of complete coincidence, Todd Luke and Pol Clarrisou—two game creators—used the term “voidscape” to describe a small experimental videogame of theirs this past week. Being a word of two syllables that seem to contradict each other, the concept begs an explanation.

Voids have always existed around videogames. It’s the negative space that you can sometimes accidentally fall into and watch as the polygons you once walked on disappear. A void is that endless, omnipresent outside part of videogames where nothing happens and nothing exists. Voids are the largest part of videogame spaces but it’s always the bit that’s covered up like a crime scene. So what’s a “voidscape,” then?

recognize your own minuteness inside this virtual universe.

Placing the suffix -scape onto the end of a word, as in landscape or dreamscape, is to describe it as pictorial; a view to be observed or explored (perhaps both), usually one of beauty. If we understand a void to be nothingness, this suffix is at odds with the word; how can we sit back and admire…nothing? What is there to explore in a nothing?

To make it clear: Luke’s two voidscape games—Cerulean Orb and Saffron Drone—and Clarissou’s Voidscape 0, aren’t just empty files that turn your screen a soul-absorbing shade of liquid black. They’re low-tech and low-poly, but there are staircases, fishes, towers, and telescopes inside of them. While the contents differ, what these three little games have in common is their positioning of a videogame scene against an otherwise all-consuming negative space.

The positive spaces where 3D models exist to climb upon and look at are just a tiny cluster inside an unfathomably enormous volume of nothing in these games. You could say the same of any videogame, but the difference here is that the void can be seen from mostly all points and angles—its presence is impossible to ignore. This invites you to recognize your own tiny insignificance inside this virtual universe. Looking outwards or wandering lost into the endless darkness might lead to contemplation (Cerulean Orb has a telescope at its center that points toward what might be a distant star inside its void), or you may choose to investigate each tiny fragment of the positive space you’ve got to hand in a maniacal fashion.

What voidscapes express is the idea of videogames as diorama. There are no walls to hide their negative spaces; they exist in the middle of (virtually) nowhere. In doing this, the artificiality of videogame spaces is brought to the fore; the voidscape is the bare-knuckle truth of videogame modality. Whereas most other games are huge attempts at convincing us of their constructed realities. The valuable difference here is that, while many videogames attempt to sell us on scale and scope, voidscapes and their positive space dioramas deliberately bring attention to minutiae and minuteness.

One of the most meaningful videogame dioramas I’ve played is Rylie Thomas’s The Milkmaid, which turns Johannes Vermeer’s 17th century oil-on-canvas painting “The Milkmaid” into a climbing frame for us to investigate. Thomas uses a videogame as a tool for us to engage in a close examination of a blown up art asset, revealing its garish textures and even the very slightest of its contours. You end up getting more intimate with an in-game asset than you probably have before just because it’s the only thing that you can focus on other than the surrounding void.

The point here is that small-scale videogame scenes may have more chance of being engrossing and meaningful than large-scale worlds. Anthony John Agnello of Gameological compares the pursuit of immersion in videogames through high graphical detail and “realism” to the movie industry’s use of to make fantasy creatures appear convincing. Agnello finds that Ray Harryhausen’s low-tech stop-motion animation of small models feels more “alive” than the computer generated creatures we see in movies today. I happen to agree with him. He puts this down to the tactility of the models, they’re “something you can touch, as real and unreal as a vivid dream,” Agnello writes.

I’d trace this comparison directly over the difference between digital dioramas and large videogame worlds. Dioramas such as Voidscape 0, Cerulean Orb, Saffron Drone, and The Milkmaid drop the impression of having a grand landscape to explore, trying to pull the wool over our eyes, in favor of a more precious and reliant relationship with a tiny virtual space and its contents. In bigger games the degree of examination that dioramas encourage usually reveals the flaws of each high-detail facsimile, its lifeless copy-paste assets, shattering any illusion of reality that a virtual world may hold.

Did you ever stop to notice the flatness of the windows and doors of buildings in Grand Theft Auto ? The paper-thin daffodils pretending to be moved by a non-existent wind in Bioshock Infinite? How about the false reflections of the windows in Watch_Dogs‘s ? I did. What I saw were monoliths standing tall wearing the thin paint of tower blocks as disguise. These cuboids had risen from the concrete to purport the idea of entering their solid innards. Stop for just a minute and you realize so easily that these open-world cities are nothing but a lie.

If this happens, all you can do is run towards the edges and never stop. Grind against the barriers until you fall through the other side and find the freefalling honesty of the void.

You can play Cerulean Orb on itch.io. Saffrone Drone is also playable on itch.io. The same goes for Voidscape 0. The Millkmaid can be played in your browser here.