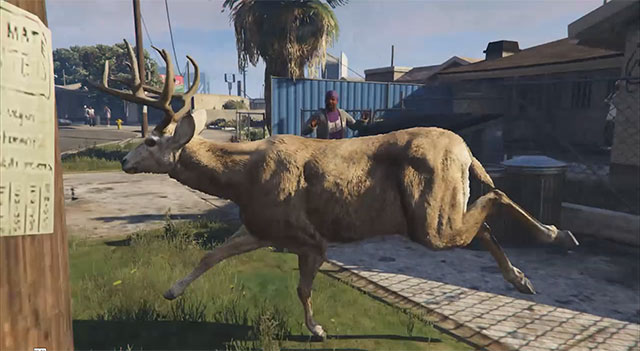 There is a wild deer wandering the paved streets of San Andreas, the fictional city of Grand Theft Auto V (2013), freely roaming the 100 square miles of gangland and beaches. By “wild” I don’t mean that this creature is merely not of civilized society—a wild beast—I mean that it doesn’t fit in with the autonomy of the game’s programmed virtuality. Like the player might be a “wild” integer in the game’s system, chasing their own goals, operating on thoughts and desires that aren’t produced by the game’s code, so too is this deer.

It is, in fact, an artificial intelligence that is ‘self-playing’ inside GTA V. “The deer has been programmed to control itself and make its own decisions, with no one actually playing the video game,” explains the deer’s creator and new media artist Brent Watanabe. He has spent the past months experimenting with the idea of a computer-controlled installation. By unleashing an AI entity into a simulated city he removes himself as artist (a conscious decision to submit to the “death of the author”) to instead let the computer act as the artist, it creating its own scenarios inside the game for viewers to interpret. And yes, there are viewers, as the deer’s activity is being entirely livestreamed onto Twitch.tv—you can view it right here.

he pulls out a handgun and starts to shoot the deer

The deer can be an agent of chaos. Sometimes, it sprints at top speed into a pedestrian, who it so happens is a gang member, and so is susceptible to signs of hostility. When the man picks himself off the ground, he pulls out a handgun and starts to shoot the deer, and the other gang members in that area join in the hunt. A nearby rottweiler runs up alongside the deer and jumps up to take a bite at its neck. Other times, the deer is nothing but a victim to the unending traffic of the metropolis. I once viewed the deer run across a street at night in front of a moving car. It was hit in the side by the bonnet, immediately limp and lifeless. Seconds later the deer respawned elsewhere and continued running in spurts as it tangled its antlers in a line of wire fencing.

The whole set-up reminds me most of Douglas Gordon and Philippe Parreno’s sports documentary Zidane: A 21st Century Portrait (2006), in which they used 17 cameras to film soccer player Zinedine Zidane during a 2005 match. Focusing solely on Zidane during this match, cutting between the various cameras they had focused on him, the two creators said the concept was to see what happens to a major football star on the pitch “when TV is not watching.” It looked towards the inaction of a soccer match while the television camera always moves to the most obvious action—keeping focus on the ball. Perhaps, in this, a different side of the professional sport is revealed.

The same idea could be applied to Watanabe’s deer camera. Here, we see what happens in a game when it is not played by a human. And so we are encouraged, when we see the deer causing these kinds of reactions in GTA V‘s virtual world, to make assumptions about the constituent pieces of the simulation. We can say that the city is made to be dangerous, a place of gangland violence, where nature is unwelcomed by the aggression of the populace and the physical barriers they erect around their structures. Further, given that San Andreas is itself based on California, we can extend the analysis to what GTA creator Rockstar means to say about the very real US state that it pins under its virtual satire.

the sanctimony of humanity to lay asphalt upon nature

Before you think this reaching, bear in mind that GTA V is the first game in the series to even include a significant animal population. The early 3D GTA games prior to it only had non-solid props representing seagulls, jellyfish, and flies. GTA: San Andreas (2004) added dolphins, turtles, and hawks. While GTA IV (2008) added flying rats and cockroaches; hardly a zoo. GTA V, on the other hand, has boars, chimps, coyotes, rabbits, cats, crows, whales, sharks, and more. These animals play a more interactive role in the game too, as dogs can be taken for walks, and the hunting side-missions see one of the three main characters shooting wild animals and taking photos of their corpses.

The presence of wild animals goes to inform one of the major themes that runs throughout GTA V‘s San Andreas: the man versus nature dichotomy. This is why, in the game, the city is said to have the most polluted air in the world, and why its Alamo Sea is considered toxic, uninhabitable to any fish that may be caught, and thought to “burn through a man’s lower intestine in seconds” if drunk. There’s also Trevor, one of the playable characters, who is somewhat of a ‘wild man’ who embraces violence and profanity with a near-lunacy.

The wild deer running through the streets of GTA V occasionally produces the sounds of sirens and gunshots. We are used to enacting this as players of the game ourselves and so it is not unique to the deer’s experience. But the moments between the chaos, when the deer butts up against a brick wall or dodges traffic on land that was once green, show us images that riff on one of its bigger themes: the sanctimony of humanity to lay asphalt upon nature, to replace trees with skyscrapers, and then to ask why climate change is happening, or to long for the presence of a declining wildlife. “We won’t be broken hypocrites forever,” goes the San Andreas motto. Despite the denial, this is a videogame in which humanity is framed as the villain, and it’s this the deer cam brings into sharp focus.

You can find out more about the Wandering Deer Cam here and you can watch the livestream here.